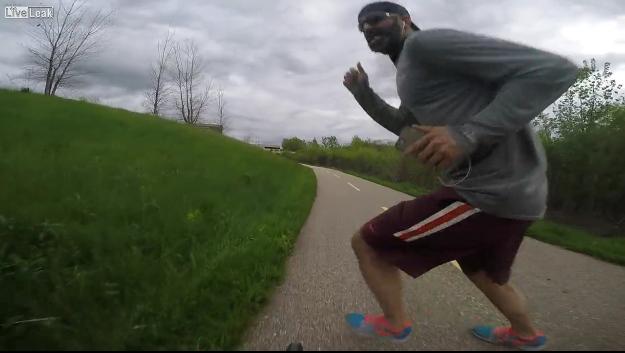 A very real demonstration that wearing headphones can be dangerous whether you're a cyclist or a runner...
by Elliot Johnston

This, though, is an indiscriminate example of the dangers of depriving yourself of one of your most valuable senses. It doesn't matter whether you're a runner or a cyclist, if you're a vulnerable road user, you're going to need all the help you can get - especially from your own ears.

This video was uploaded to LiveLeak the day after the incident took place. The cyclist in the video, whose identity is unconfirmed, gives the 'on your left' call to warn the runner of his presence.

Either due to the runner's use of headphones, or the low-volume warning issued by the cyclist, the runner doesn't check for traffic before making a surprise left turn into the cyclists path.

The fall out is noisy and sounds painful, though there are no details about injury to the runner, cyclist, or the bike.

We hope all make a full recovery and explore alternative options - like bone conducting headphones - for listening to music while exercising.