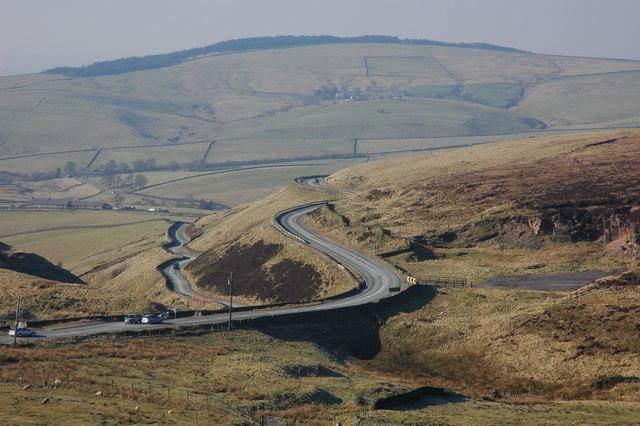 Cat and Fiddle road notorious for deaths
by Sarah Barth

Tributes have been paid to a father of three who was killed by a car while cycling on the Cat and Fiddle - one of Britain’s most dangerous stretches of road.

Guy Andrew Wharton, 46, was hit by a blue Renault Clio on the  A537 Buxton New Road in Macclesfield on Tuesday at about 5.20pm.

Police have arrested the driver, a 41-year-old man from Buxton, and are seeking witnesses to the collision. The driver has since been bailed.

His family said: “We are deeply shocked and saddened at the sudden and tragic loss of Guy, a loving father, husband, brother and son.

“He was a passionate cyclist and loved riding in the hills. He will be greatly missed.”

The science teacher at Tytherington School in Macclesfield was praised by his colleagues for his commitment.

In a statement on the school’s website, headteacher Emmanuel Botwe said: “It is with great regret that I inform you of the sudden death of the much-loved science teacher Guy Wharton. Mr Wharton was involved in a fatal road traffic accident on the A537.

“Mr Wharton will be hugely missed. He was a great teacher and arrived at Tytherington School in 2002. I would like to take this opportunity to extend our deepest sympathy to his wife and three children.”

Mr Wharton was discovered at the roadside by driving instructor Ian Brown, who tried to save his life when he came across the scene during a driving lesson.

He and a passing nurse attempted CPR until the arrival of the emergency services.

Ian, 55, from Abacus Driving School, told the Buxton Advertiser: “This was a terrible tragedy for the family who got heart-breaking news and it weighs heavily on my mind and my heart goes out to them completely.”

Cheshire police are appealing for anyone who witnessed the collision, which happened at around 5.20pm on Tuesday, and has information to contact them on 101, quoting incident 688 of June 7.

Back in 2010 we reported how the A537, well known to cyclists as the Cat & Fiddle, topped a list of Britain’s ten most persistently dangerous roads.

The Road Safety Foundation said that the single carriageway road, which has a speed limit of 50mph, is particularly hazardous for motorcyclists, with police records showing that “the vast majority of casualties were motorcyclists, from outside the local area, male, and with an average age of 35.”

It added that factors contributing to the road’s danger were its “severe bends, steep falls from the carriageway and is edged by dry-stone walls or rock face for almost all of its length,” and added that the number of fatalities and serious collisions there had seen a 127% rise from 15 to 34 between 2006 and 2008.

Lee Murphy, Manager of the Cheshire Safer Roads Partnership, said at the time: "The Cat & Fiddle does have a bit of a challenge mentality, and a minority do try to ride it as fast as they can.

He continued: "I think there's almost a 'badge' of 'I've ridden the Fiddle.' It's like climbing Everest or swimming the Channel; it's something that people aspire to.

"But by highlighting this each year, I suppose we're perpetrating its reputation as 'the most dangerous road in Britain," he said, adding that “if you go on YouTube, you can see lots of people are filming themselves riding that route, which is fairly unusual thing to be doing."