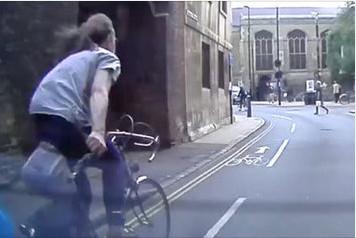 Police in Cambridge are seeking this man, who is suspected of vandalising taxis in the city with a bike chain and lock.

Taxi drivers say the cyclist has a vendetta against them, and has damaged their vehicles in ride-by attacks.

It is not the first time the man has been suspected of similar violence, but he has finally been caught on camera, and police want to speak to him.

Karl Stamper, a member of Cambridge Hackney Carriage Association, said he was targeted and the attack terrified an elderly passenger he was carrying.

The incident happened on July 11, when he was driving through Hobson Street at around 1.50pm.

He says his cab was hit with a lock and a chain.

He told Cambridge News: "I had passengers in the taxi and one was senior and we both jumped. He obviously knows what he is doing.

"It seemed he had gone out to deliberately do this. It was totally unprovoked and we know he has done it before. He must be stopped."

Another taxi driver told the paper: "We've got one nasty cyclist going round hitting taxis with his padlock."

One driver on Facebook said a man had punched his wing mirror when he cycled past on Bridge Street. "The glass fell out and I stupidly tried to chase him on foot. He gave me a 'two fingers' sign for good measure as well."

Another said: "He actually hit my car with a D-lock. Nasty man, pure mouth on him until you challenge him."

"Starting to wonder if it's the same one who punched my mirror on The Broadway," said another cabbie.

Anyone with information should call Cambridgeshire police on 101.

Last year we reported how a cyclist seen in a YouTube video smashing a car window during a San Francisco protest ride was arrested. 39-year-old Ian Hespelt was spotted by police who were on cycle patrol outside a Billy Joel concert who recognised him and his bike from footage of the incident.

Police also made use of second video to help them identify him.

After investigators finished questioning him, Hespelt was arrested on suspicion of assault with a deadly weapon, vandalism, false imprisonment, and maliciously and wilfully throwing a substance at a vehicle – all of which are felonies. He was also booked on a misdemeanour charge of inciting a riot.

The incident took place during the monthly San Francisco Critical Mass protest ride. A stand-off between protestors and a driver saw a group of cyclists surround a car. When the driver tried to manoeuvre around them, one hit the car with his bike, while Hespelt repeatedly swung at it with a U-lock. The vehicle is said to have sustained about $3,000 dollars’ worth of damage.