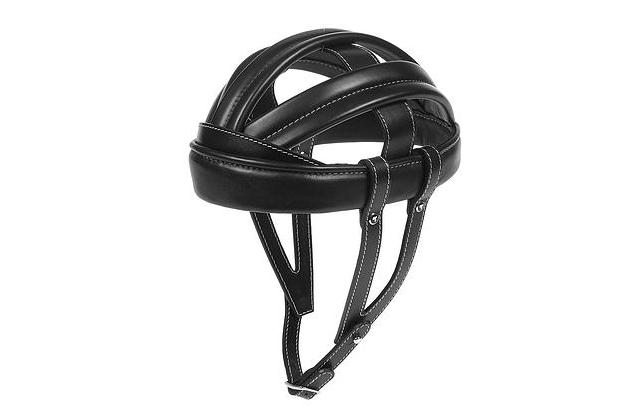 Totally Mexico! The Tucker London Cycle Hairnet. Yours for £215

"To own one is a mark of understanding this world" The leather cycle 'helmet' makes a return. Probably ...
by Simon_MacMichael

No words we could put together can better convey the thinking behind the product, and its target market, than those appearing on the brand’s website, so here they are. (To be honest we are not actually sure whether this is a spoof or not so we'll leave you to decide.)

The Tucker hairnet is for the person who identifies with the technicality AND sartorial attributes of one’s bike, its components and related accessories/fashion.

The hairnet is a key piece worn by the greats of cycling history. It is enormously relevant to today’s urban cyclists because it is a paragon of sporting design excellence and is a treasured key piece to own for cycling aficionados.

The heroes of the 70s and 80s era in particular wore hairnets and peaked caps, they are immortalised in striking black and white photographs wearing these pieces. Today’s cyclists hold them in extremely high regard. To own one is a mark of understanding this world.

We can think of no better way for urban cyclists to do just that. On their commute, or when popping to the pub, say.

Available in black, white and red, the helmet is “handmade in London” from “beautiful Italian leather.”

Certainly, it would be an arresting sight in the window of a shop in … ooh, who knows … Soho, say, especially if there were no clue about its function, leading the curious to enter and find out more.

You’re wondering about the price, aren’t you?

But for that, you get a cap that normally retails at £20 thrown in.

You’ll note that the marketing copy doesn’t refer to the Tucker Cycle Hairnet as a “helmet” – presumably due to European consumer law that impose strict requirements on products labelled as such.

Oh, that “Totally Mexico” reference in the headline?

That’s because the Tucker Cycle Hairnet reminds us of nothing so much as the helmet the great Eddy Merckx wore when he set the UCI Hour Record in Mexico in 1972.

And nothing whatsoever to do with Nathan Barley.