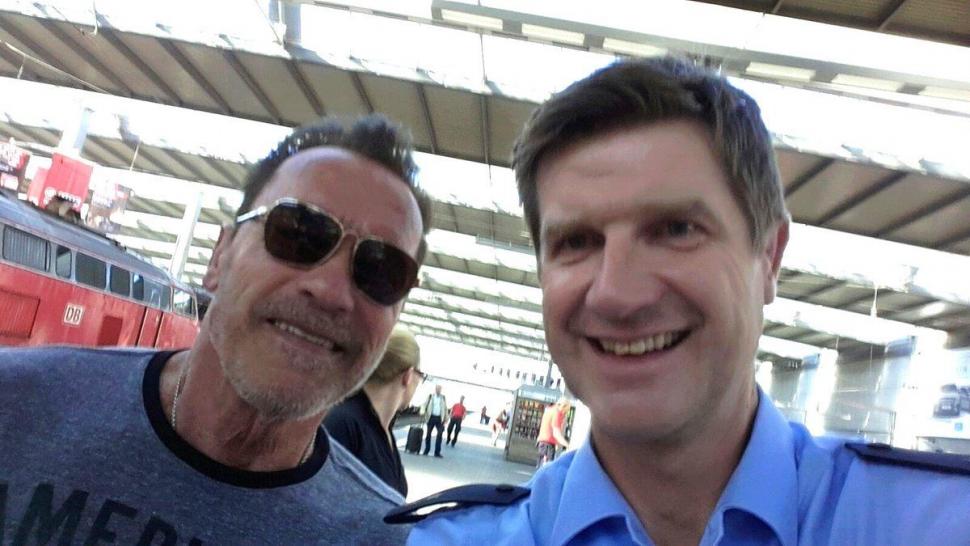 Movie star, US governor, climate change activist, anti-social cyclist? The multi-talented Austrian let off with a warning and a selfie by German police
by Elliot Johnston

Arnold Schwarzenegger was caught cycling through Munich's busy train station by German police this weekend, and was sentenced to one selfie which was later tweeted by the force's Bavarian social media team.

The former California governor, action movie star, and current climate activist, Schwarzenegger appears to have been traveling out of Munich following Oktoberfest celebrations when he was stopped by police.

Cycling is prohibited in Munich's main station, "even for the Terminator," read the police force's tweet. But it wasn't just the Austrian bodybuilding actor who was caught by the police cycling through the station this weekend.

According to the BBC, two cyclists were seen racing through the station on Saturday lunchtime. Police stopped one and warned him before he allegedly told the officer that he was in a hurry because he was Arnold Schwarzenegger's bodyguard.

Shortly after, the officer who thought that the initial cyclist's response was a "bad joke" saw two more cyclists riding through the station at a dangerously high speed - one of whom was the 'body guard' he had stopped previously, this time accompanied by the Terminator himself.

Schwarzenegger was allegedly apologetic for making the mistake, and apologised on behalf of his bodyguard.

The following picture was uploaded alongside the message "Cycling in the main station Munich - unfortunately also for the #Terminator prohibited. @Schwarzenegger took it well and still took a selfie."

Mr Schwarzenegger is a keen cyclist, a hobby which lead to the road.cc Edinburgh Terminator chase back in January when the Edinburgh Evening news reported that the Austrian would be riding around the Scottish city.

>Read more: Arnold Schwarzenegger off for a bike ride in Edinburgh

We offered a prize for the first road.cc user to grab a photo with him on a bike. Had we known he'd be on two wheels again in a busy European location, we might have done the same.