Cycling doubles on Cambridge road thanks to protected bike lane

Thousands more cyclists are using two busy Cambridge roads per day since protected cycle routes were constructed, with numbers doubling on one route since 2013; evidence, the Council says, if you build decent cycle infrastructure people will use it in significant numbers.

Hills Road and Huntingdon Road, both main routes connecting Cambridge city centre with residential and employment areas, saw a 38 and 100 per cent increase, respectively, with more than 3,000 more cycle journeys per day between them.

The two routes, with stepped and kerb-protected cycle tracks, were paid for with Cycle City Ambition Fund money, awarded by the coalition government in 2013. Cambridge was originally awarded £4 million, before the figure was increased to £10.1m. 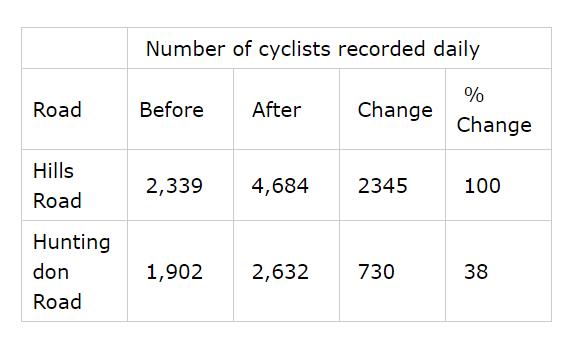 “We are really pleased with the figures,” he said. “If you had said to me: ‘how does a 20 per cent increase sound?’ I would have been very pleased, but to have 100 per cent is brilliant. There is a lot of hassle when we are building these schemes so it makes it all worth it.”

Although Davies said while some of the increase in cycling is due to city growth, particularly around Hills and Huntingdon Road, with developments at Addenbrooke’s Hospital, a biomedical campus and residential developments, the cycle lanes help more people feel confident getting about by bike.

“The thing is, cycling is very normalised in Cambridge already, people can move around the city and they will see people cycling who are like them, just normal people with bikes, carrying shopping, and carrying kids. So someone sees somebody cycling and thinks: ‘I could be doing that’.

“When we put something in, that’s why it’s direct, it’s painted red, it’s got floating bus stops - the design of the scheme breaks down some of the reasons they aren’t cycling, like mixing with buses.”

Last year a report was released detailing 28 hours of CCTV footage at floating bus stops in Cambridge. Evidence showed the floating bus stops improved safety for cyclists, with 99 per cent of cyclists not interacting with pedestrians at all. Those that did scored a one or two on a five point scale, meaning either precautionary braking or controlled braking by a cyclist in the presence of a pedestrian.

Cambridge City Council set a target of 40 per cent of all journeys by bike by 2023. Currently 25 per cent of trips are by bike.

Davies said: “It’s an ambitious target but the signs are good: if we keep providing the infrastructure we can get to those levels.

Cambridgeshire County Councillor and Cycling Champion Noel Kavanagh, Cycling Champion, said “Hills Road is on a key route for places of employment and education. The new facilities clearly have encouraged more people to cycle. It is essential that as the city grows people are encouraged out of cars and onto bikes and buses.  This is a great example of if you build cycling facilities people will use them, and reinforces that Cambridge is the cycling capital of the country.”