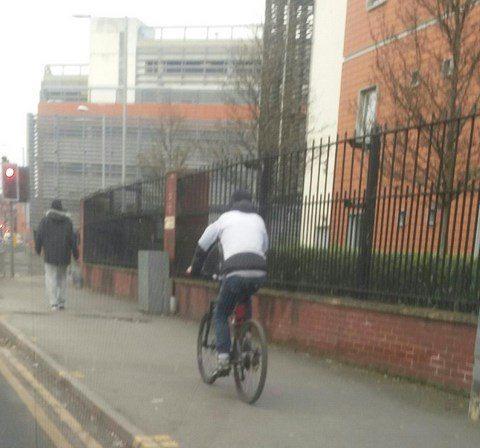 Longsight police have come in for a hammering on Twitter after criticising a cyclist for riding on the pavement despite “millions spent on cycle lanes in Manchester”.

Government guidance is that cyclists may ride on the footway provided they do so considerately, and that police officers need to exercise discretion.

£millions spent on cycle lanes in Manchester but some still chose the pavement endangering others. Cyclist strongly advised #cyclesafe pic.twitter.com/93tUTvjTMM

Many were quick to point out that a development such as the segregated cycle lane on Wilmslow Road is all well and good if you actually happen to be heading somewhere it leads to.

@GMPLongsight if you'd taken photo next to new bike lanes this would make sense. Otherwise you're just showing most roads still aren't safe

Others made comparisons with motorists.

£Millions spent on motorways in England but some still choose the pavement endangering others @GMPLongsight pic.twitter.com/h46Jz4jNGZ

The ‘millions being spent’ element was unsurprisingly a popular theme.

@GMPLongsight Millions spent on roads in Manchester but some still choose the pavement endagering others...https://t.co/86Az76uKz2

@GMPLongsight £millions spent on Police in Manchester but some still woefully poor at identifying the real dangers on the road! #OpCubo

West Midlands Police – famous for its pioneering close-pass initiative – was also invited to comment but clearly felt this wasn’t necessary.

@_Jimc @GMPLongsight @gmptraffic looks like they are getting enough constructive feedback as it is.