Coffee stop turns into chat with Peter Sagan for one road.cc reader

"The cherry on the Belgian Bun" says Michael Marks, who was in Flanders to ride the Continental Cancellara Classic...
by Simon_MacMichael

Heading over to Flanders at this time of year to ride the cobbles is a treat for any keen cyclist, but one road.cc reader’s trip across the Channel last weekend was made even more memorable – with a coffee stop enlivened by the presence of world champion Peter Sagan and his Bora-Hansgrohe team mates.

Michael Marks had driven over to Kortrijk from London on Saturday morning ahead of taking part in the Continental Cancellara Classic the following day, with the sportive taking in the route of the E3 Harelbeke.

Waiting to check into his hotel, Michael – who is a ride leader at the Specialized Concept Store in Ruislip and had travelled over with his cobbled Classics riding buddy Greg Robertson, with whom he has previously ridden the Paris-Roubaix Challenge – decided to go for a coffee.

“A group of cyclists whizzed past taking selfies,” he told us. “It was the Bora-Hansgrohe team, though I didn’t see Peter at that point. They stopped at the Ridder En Hove coffee shop about 100 metres away.

“I was surprised to see they left all the bikes including Peter’s custom Tarmac piled up outside, no locks,” he continued. 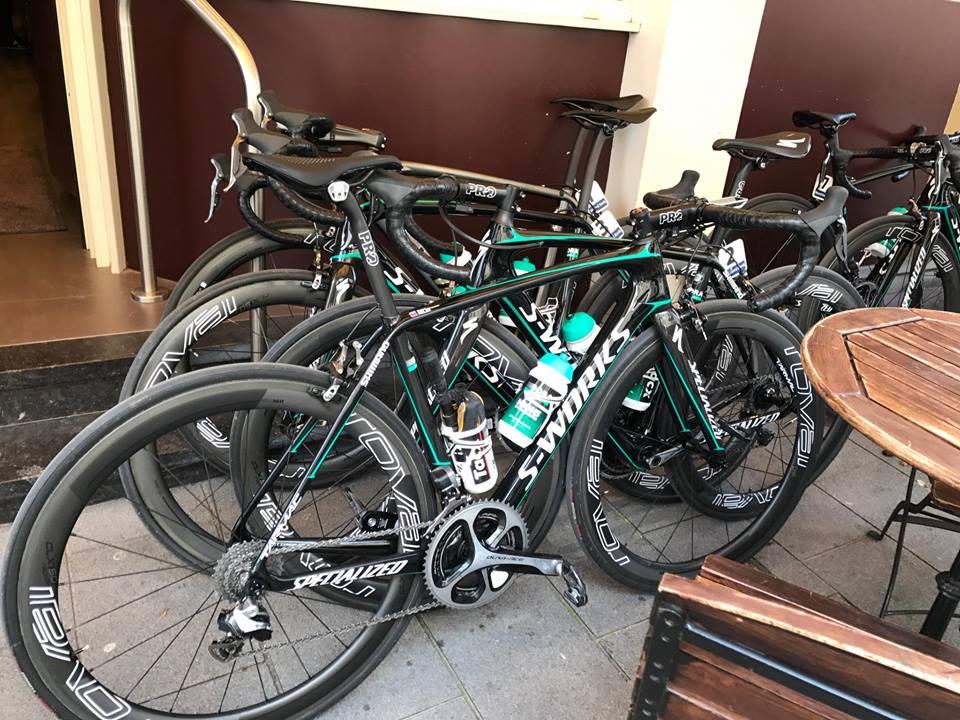 “I went in and was somewhat surprised to see Peter, his brother Juraj and the rest of the team.

“The team were in team colours and Peter in the rainbow jersey and Juraj in the Slovak national champions’ jersey.

“It was pretty cool – just like any club out for a Saturday ride and having a coffee and cake stop.

“I asked Peter about the E3 the day before. He was sorry he had crashed. He said he was upset he didn't get a better finish.

“I told them I was doing the E3 sportive the next day and asked what it'd be like. He smiled and said I'd be okay. The team were friendly laughing and chatting. Peter was happy to pose for pictures with anyone who asked.”

It turns out that the coffee shop is a regular haunt of the world champion during Classics season, as Michael explained.

“The story is that the owner is a big Sagan fan and previously he baked Peter a cake and had it delivered to the hotel.  Since then Peter has been taking the team there for coffee.” 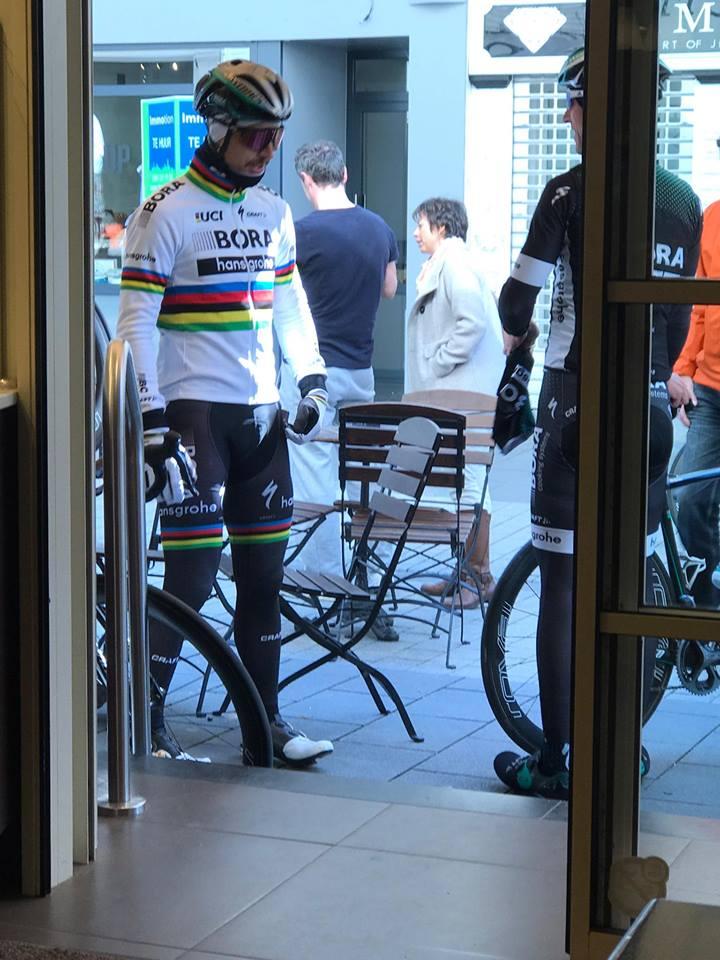 “We were looking forward to a great day’s cycling, we hadn't even thought that the town would be used as a base for the E3 and Gent-Wevelgem.

“It was surreal, and Greg said I looked as if I had been hit over the head with a cricket bat  (in a good way I guess).

“I can only liken it as seeing a premiership team playing on the local park pitches for a kickabout then en masse going to a local caff, with no hangers on, and no airs or graces.

“They were all down to earth and friendly.  It was funny to see Peter get up when they were going and pay the bill for the table.” 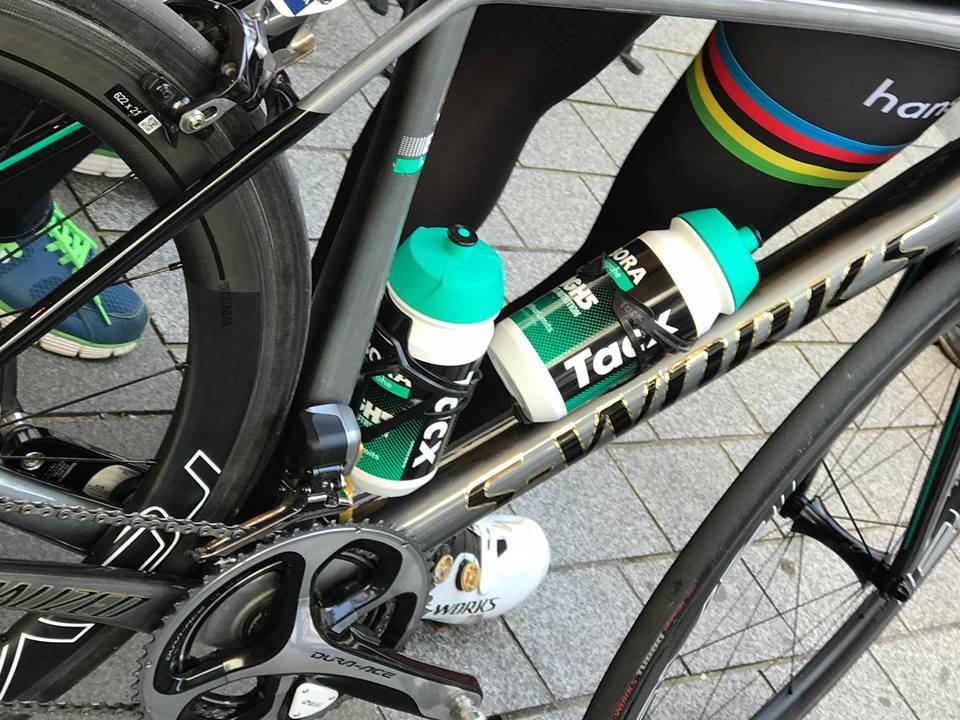 And as for the reason he headed to Belgium for the weekend where, like Sagan, he was riding a Specialized – though in his case a Roubaix?

“Riding the full distance Continental Cancellara Classic was probably one of the best day’s cycling I've had in a while (even if Spartacus himself did only do the short ride).

“Perfect weather, relaxed riding, bouncing over the cobbles at speed and long swoopy descents on smooth, smooth roads was the perfect antidote for the sharp climbs. What wasn't to enjoy?

“Watching a recording of the E3 brought it all back to me as I recognised the roads and the climbs.

“It's a special feeling riding in a peloton knowing you are on a route the pros have just done a day or two before ... a man is allowed to dream after all.”

Michael, who posted his ride to Relive, added: “I hate hills – but after 12 climbs in the one day I'm ready to tackle anything now!”

Whether it’s seeing Team Sky swoop through your town at full pelt on an early season training ride in the Home Counties, finding an Astana sports director in team uniform next to you at a pedestrian crossing in Piccadilly on a February afternoon, or Alex Dowsett whizzing past you on his road bike as you’re pedalling along on an ex-Royal Mail clunker complete with dog in basket – all of which have happened to the writer – what are your stories of your brushes with the pros?

Let us know in the comments below.