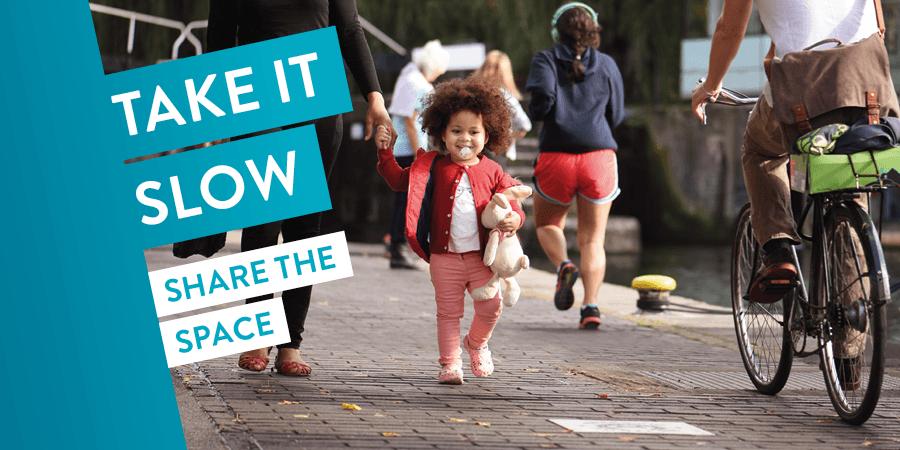 Canal & River Trust to cyclists: don't be trucks of the towpath

Cyclists are asked not to be the “trucks of the towpath” in the latest bid by the Canal and River Trust to improve behaviour on its most popular paths.

In a recent user survey, the Trust found nearly a quarter of people (23%) identified cyclists speeding past them in public places as their biggest bugbear. The charity, which manages 2,000 miles of waterways across the country, says pedestrians take priority on canal towpaths, and asks fast commuter cyclists to slow down, or seek a different route.

Speaking to road.cc the Canal and River Trust’s Dick Vincent and Claire Risino say they hope a polite request to slow down will eventually get the message across.

Dick Vincent says though he believes “cycling is awesome”, some attitudes need to change. “I can remember when I first ditched my car and got a bike,” he says.

“After a year I felt I owned everything, I was like: get out of my way. As more and more people take up cycling and get into that kind of mind set, it becomes a problem.”

“We want people to remember the cyclists do ask to be treated with respect on the road, and rightly so,” he said, adding when the boot is on the other foot cyclists need to respect others' safety.

Claire Risino, who is the charity’s Campaigns Manager, says it is about pace, not speed – and ultimately going too fast is a choice.

“It’s not the activity, but the behaviour,” she says.

“We want cyclists to use the towpaths, and have a good time,” she says, acknowledging “cyclists get a bum deal” in terms of a lack of safe infrastructure on the roads.

“You’re welcome, but slow down please”.  “We just don’t want anyone to get hurt.”

In 2016, 396 million visits were made to the charity’s towpaths by walkers, cyclists, boaters, anglers and runners, sharing the often narrow paths originally designed for horses to tow boats laden with goods.

"Trucks of the towpath"

Risino says there is a risk cyclists become the “trucks of the towpath” in their potential to intimidate others, but it is not just cyclists. She once saw two runners crash head-on into one another, knocking one of them unconscious.

The survey was carried out as part of Share the Space, Drop your Pace campaign. The Trust has repeated this “slow down” message for some time, from its “duck lanes” to the “two tings” campaign – which apparently encouraged some cyclists to incessantly “ting” people out of their way.

Because much of the UK’s towpaths are narrow, and cannot be widened, separating cyclists from pedestrians, or introducing other speed restricting measures, is not possible. Now the Trust is painting 3-D “sleeping policemen” on the towpath surface, in a nod to infrastructure seen on the roads.

Vincent says the constant messaging becomes “boring”, but likens the change of mind set needed to that around drink driving – it took decades of public messaging for driving under the influence to become socially unacceptable.

“We would love to be promoting those great cycling routes around the country more instead,” he says, highlighting Tardebigge Locks in Worcestershire, and Caen Hill Locks, near Bath, as great cycling destinations.

A 16 mile stretch of towpath between Paddington and West Drayton in London is seeing £2.5m investment, to become part of a Quietway route. The money will be spent on resurfacing, and measures such as wheeling ramps - gulleys beside staircases to help cyclists push their bikes up and down. The route is being improved in sections and will be complete next year.

He says: “By the time we have finished you will be able to push a wheelchair from Brentford to Paddington.

“The reason we are doing Share the Space is that as work finishes we want to start as we mean to go on and use the route nicely.”

“A lot of people won’t have had problems on the towpaths but in specific areas, it can be a problem,” says Risino, adding “this is a destination, rather than a route.”