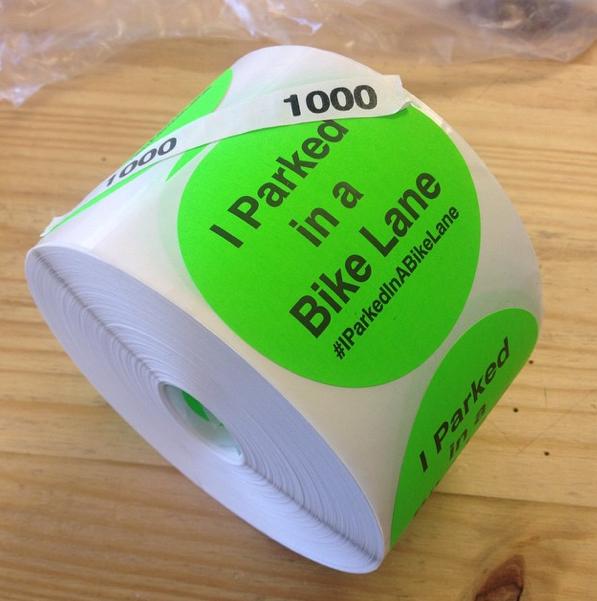 Irish police have doled out a record 417 penalty tickets to drivers who parked in cycle lanes this year.

The number is up dramatically from 2016 figures, which saw 268 tickets issued.

Four drivers were given penalty points for driving in a cycle lane.

On the other hand, 441 on-the-spot fines were issued to cyclists, with running a red light and cycling in pedestrian areas the most common offences, according to figures released in August.

The figures were out of date in comparison to those for parking fines, which covered the 11 months to December.

Irish cycle campaigners have worked hard to keep the issue of clear cycle lanes in the public eye, with footage of their protests, and photos of vehicles parked or driving in cycle lanes, on social media in posts tagged #FreeTheCycleLanes.

Paul Corcoran, chairman of Dublin Cycling Campaign, told the Times: “If a car pulls into a cycle lane, the cyclist is forced into the main flow of traffic on the main road.

“There is also the potential of getting ‘doored’ — a passenger or driver could get out of the car and knock you into the traffic.”

An Garda Siochana said it “continues to monitor and focus on various issues with numerous targeted campaigns”.

Earlier this year we reported how the Greater Cambridge Partnership, the delivery body for Cambridge's City Deal, decided last Wednesday that cars should be permitted to park in a cycle lane to help people access local businesses. Cycle campaigners say the move is dangerous and undermines the whole purpose of the scheme.

A spokeswoman for the GCP said: “No parking restrictions have been implemented on Green End Road yet and it is proposed that there will be a short amount of time-limited parking outside the shops to support local businesses. The Traffic Regulation Orders will be reviewed at next week’s Executive Board.

“Kerb segregated cycle lanes from Nuffield Road to Milton Road on Green End Road are planned and work will start this later this year.”

In a statement on its website (link is external), Cambridge Cycling Campaign suggested an alternative.

“Camcycle would instead like to see the Traffic Regulation Order restore double-yellow lines to the entire cycle lane. In the case of the businesses that believe they will need car parking directly outside their premises, we note that the planning application currently filed for the property offers an opportunity to resolve this issue: through the creation of a segregated cycleway next to the footway, in a manner that puts parking spaces for cars between the cycleway and the carriageway.

“At the Greater Cambridge Partnership Executive Board meeting on Wednesday we will be asking the Board to support a resolution to create both a safe, protected cycleway and parking availability for the businesses.”