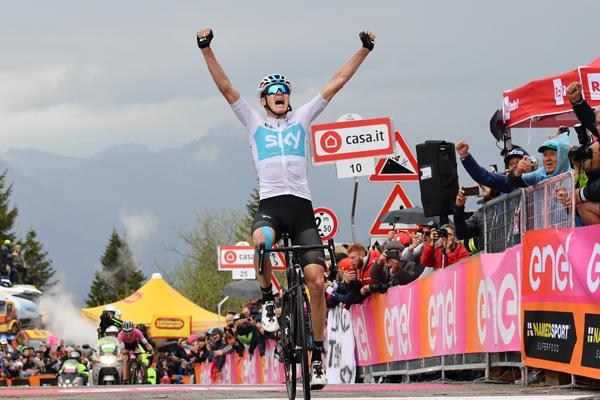 Chris Froome (Team Sky) just about held off race leader Simon Yates (Mitchelton-Scott) to win stage 14 of the Giro d’Italia after attacking with 4km of the Monte Zoncolan to go. The victory means he has now won at least one stage in each of the three Grand Tours. It was also the second British 1-2 in Giro history after the 2013 time trial in Saltara, when Alex Dowsett edged out Bradley Wiggins.

The 186km mountain stage from San Vito al Tagliamento to Monte Zoncolan had loomed large all week and a Froome attack began to seem more likely when team-mate Wout Poels set to work on the lower slopes.

The Dutchman reduced the front group to just a few favourites and shortly after he moved aside, his team leader pushed on, later explaining that he felt that was “the moment the race was really on the limit.”

The gap to Froome’s rivals at one point grew to around 12 seconds, but Yates gave chase and at times seemed as if he might catch and pass his quarry.

In the end the pink jersey finished six seconds back and Domenico Pozzovivo (Bahrain Merida) was next over the line, 23 seconds down on Froome.

What . A . Ride! @chrisfroome holds off Simon Yates for a sensational win atop Monte Zoncolan #Giro101 pic.twitter.com/aK15s4U1XX

Last year’s Giro winner, Tom Dumoulin (Sunweb), adopted a steady approach to the climb and conceded 37 seconds. He remains in second place, 1m24s behind Yates, while Froome moves up to fifth, 3m10s behind.

“It’s just such a good feeling, especially after a hard start to this race for me and the team. It’s great. The team have supported me so well these last two weeks, so to get the victory really means a lot.”

Commenting on the looming Yates, he added: “Simon was just behind me. I kept on hearing five seconds, ten seconds, five seconds and I didn’t know if he was going to catch me or not, so it was just such a relief to get into that last 100m and to hear that I was going to win the stage.”

1
Council has "no intention to enforce" parking restrictions in segregated cycle lane where cars are parked bumper to bumper
2
Near Miss of the Day 521: Close pass ... by a police van (plus how it all went a bit Kafkaesque afterwards)
3
Jeremy Vine films motorist driving down Hyde Park cycle path
4
Have your say on rat-running motorists driving through London’s Royal Parks
5
Bike at bedtime: Cotic Escapade
6
Police in Forest of Dean send group of seven mountain bikers back to Wales for lockdown rule breaches
7
Boris Johnson accused of breaking lockdown with Olympic Park bike ride – even though he did not appear to break law
8
Five cool things coming soon from Kona, Wahoo, Chapeau, Galibier and Ruzer