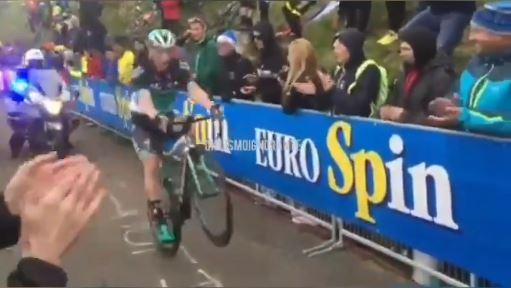 Video: Sam Bennett wheelies up the Zoncolan at the Giro d'Italia

Bora-Hangrohe's Irish sprinter was the last rider up the mountain - but he put on a crowd-pleasing show...
by Simon_MacMichael

Chris Froome and Simon Yates may have grabbed the headlines on the Zoncolan at the Giro d’Italia yesterday – but there was still plenty for the fans to enjoy half an hour after the leaders had passed as Irish sprinter Sam Bennett wheelied his way up the mountain.

Even the presence of the broom wagon immediately behind failing to deter him from pleasing the crowds.

Twitter account Ciclismo Ignorante put together a montage of three separate videos shot by fans of the Bora-Hansgrohe rider performing the stunt.

“When the first rider goes past, it’s lovely,” they wrote, “but when the last one passes, it’s really lovely.”

Bennett finished the stage in 166th and final place, 33 minutes 49 seconds after Froome had crossed the line.

Having won two stages of the race, he is currently 40 points behind Quick Step Floors rider Elia Viviani in the points competition.

However, with the final week mainly playing out in the mountains, opportunities for Bennett to try and close the gap are limited, however - assuming both men make it to Rome, of course.