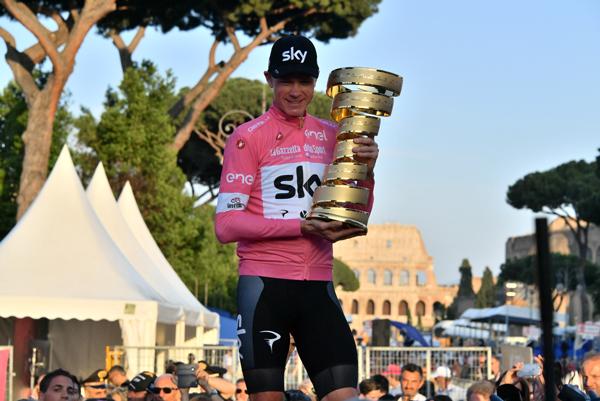 Chris Froome has become just the third rider in history to hold the title of champion of each of cycling’s three Grand Tours at the same time, sealing his victory in the 101st edition of the Giro d’Italia in Rome this afternoon, with the 21st and concluding stage won by Sam Bennett.

This afternoon’s 114-kilometre stage comprising 10 laps of a circuit in the heart of the Italian capital threatened to descend into farce as riders made their feelings clear about the perceived danger of the course, effectively neutralising the race.

As a result, organisers RCS Sport decided to take the final time for the general classification with seven laps of today’s stage still remaining.

The decision effectively split the race in two as the sprinters and their leadout trains came to the front while the riders at the top of the general classification sacked off the pace and took a relatively leisurely ride through the Eternal City.

Froome, who celebrated his 33rd birthday during the three-week race, was among the final riders to cross the line, side by side with his Team Sky colleagues, more than a quarter of an hour after Bennett had won the stage.

He joins Eddy Merckx and Bernard Hinault in being the reigning champion of the Giro d’Italia, Tour de France and Vuelta a Espana, and the only one to have done so since the Spanish race was moved from the Spring to its current late-season slot on the calendar.

He is also the first rider since the late Marco Pantani in 1998 to have won both the overall title and the mountains competition at the Giro d’Italia.

With his salbutamol case resulting from an adverse analytical finding for twice the permitted level of the anti-asthma drug salbutamol unlikely to be resolved before July, Froome will head to the Tour de France hoping to emulate another of the Italian’s achievements that year, when he became the last rider to win both races in the same year.

“It's great to soak up the atmosphere here in Rome. I was surely not disappointed by the crowd and the monuments. I need a bit of time to reflect but this race has been incredible,” he said after finishing today’s stage.

“For any cyclist, it's a dream to have all three Grand Tour leader's jerseys. I'm still pinching myself. I can't believe I'm here in the Maglia Rosa.”

There was one significant change to the general classification today, however, with Thibaut Pinot of Groupama-FDJ, third overall after yesterday’s stage, spending the night in hospital in Aosta with suspected pneumonia.

He has since been released from hospital and will now spend a period of rest, with Astana’s Miguel Angel Lopez, winner of the best young rider’s classification, completing the overall podium behind Froome and runner-up Tom Dumoulin of Team Sunweb.

At the front of the race, Quick Step Floors, looking to set up Elia Viviani for his fifth stage win and Bora-Hansgrohe, working for Irish sprinter Bennett, ensured that the day’s attacks were kept in check.

In the final sprint, Bennett followed Viviani’s wheel – nudging the Bahrain-Merida sprinter Niccolo Bonifacio aside in the process – before coming round the Italian to clinch victory, although it is the Quick Step Floors rider who wins the points competition.

After his third victory of the race, Bennett said: “I don't know how I managed to beat Elia Viviani. I suffered so much over the past few days in the mountains, but my team did a fantastic job to bring the last breakaway back today.

“It's fantastic to have won three stages in the Giro but I'll have to get up tomorrow and focus on further goals, possibly the Irish championship as I'd love to show the national colours on the world stage.”