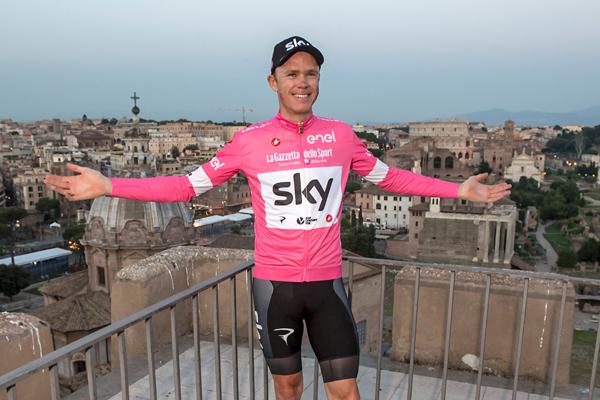 Chris Froome insists there is “no question” over the validity of his victory in the Giro d’Italia, which finished in Rome yesterday.

The Team Sky rider, who moved into the overall lead with a stunning solo ride from 80 kilometres out on Friday Stage 19, is the first British rider to win the Italian race.

He also becomes the seventh rider in history to have won all three of cycling’s Grand Tours and only the third, after Eddy Merckx and Bernard Hinault, to have been champion of each of them at the same time.

The fact that the case relating to his adverse analytical finding for salbutamol at last year’s Vuelta is still unresolved casts a shadow over his Giro d’Italia victory, although Froome is confident he will clear his name.

Speaking to BBC Radio 5 Live  today, the 33-year-old was adamant that there would be no room for doubt over the validity of his latest victory, achieved by a margin of 46 seconds over last year’s winner, Tom Dumoulin of Team Sunweb.

“There should be no question at all about the validity of the results here,” the Team Sky rider said.

"I am being tested absolutely every day - before the race and after the race.

"I know from my side, I've done absolutely nothing wrong and it's only a matter of time until that is clear to everybody.

"It's unfortunate for the sport and its image, but hopefully we'll get this result as soon as possible.

“For everyone, that would be the best thing possible. We're in the middle of that process right now."

With four Tour de France titles and his Vuelta victory last year, Froome has now won six Grand Tours and says that the past three weeks have provided the toughest test of those races.

"It's so much more unpredictable," he said of the Giro d’Italia.

"It's a lot more explosive and, with the risk involved in terms of crashing and missing the right move at the right moment, I think this is the most tricky of the three Grand Tours that we have on our calendar.

"This was the hardest victory for me."

But with the latter dropped as Froome launched his attack, the Team Sky man finished the day with a lead of 40 seconds over Dumoulin, while Yates, dropped early on the climb of the Colle delle Finestre, lost more than 15 minutes to fall out of contention.

Froome said: "Simon rode an incredible race. Obviously he's a rival of mine and I was trying to beat him, but for two and a half weeks he was on top form and was amazing.”

He added: "I've got no doubt he will win one of these big races one day."

Now, Froome is taking a short break before starting his preparations for the Tour de France, where he is seeking a record-equalling fifth victory and would also be the first man since the late Marco Pantani to win the Giro and Tour in the same year.

"I'm going to take two or three days off to relax with my family, but then it's straight back into training,” he said.

"It's six weeks to the start of the Tour de France, so that's the big goal now. I want to be in the best shape possible for the start in July."