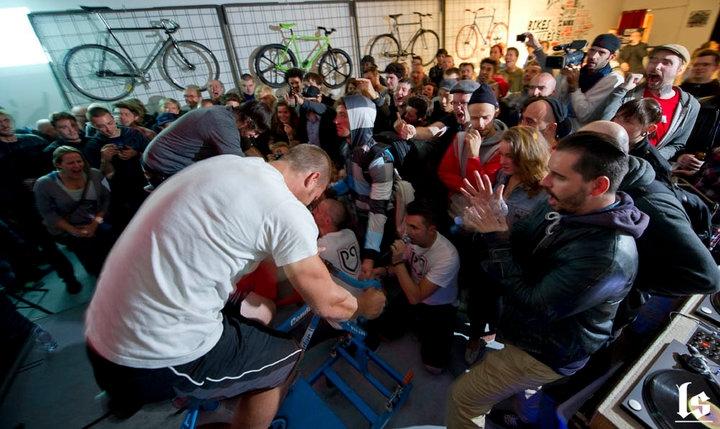 Forty-five riders came from all over Belgium, France, Holland and Germany to compete on the rollers in the usual beer-soaked rowdy atmosphere.

It looked like the Dutch were going to make it a clean sweep, until the Belgian BMX boys arrived. Jordan Froidmont and triple European champion Arnaud Dubois both dipped under the 23-second mark to take the top two qualification spots.

The BMX stars got faster and faster as the night wore on and no one was able to catch them. In the final Arnaud easily beat his friend Jordan to take the first Rollapaluza event in Belgium.

Meanwhile, riders in the UK are limbering up for the 2010/11 winter series, which starts in Newcastle on Sunday 26 September, before moving to Plymouth for the Devon and Cornwall round on Friday 1 October.

There will also be a regional heat in Bristol, with others planned for Cardiff, Manchester, Bournemouth, Birmingham, London, Edinburgh/Glasgow and Cambridge. Details of the events will be posted on the Rollapaluza site as they’re finalised.

Next Friday’s Devon and Cornwall heat in Plymouth will be held at WOW (formally the Quay Club), 11 The Parade, Plymouth, from 7pm and costs £5 on the door.

Last year more than 500 people took part in events all over the country before the winners – Melissa Bury and Miles Stovold – were eventually crowned at a London finale.

Look out too for details of Rollapaluza's London Winter League, to run between November and February. There will be six weeknight heats followed by the final - dates and places to be published soon on the Rollapaluza site.