Mayor of London Sadiq Khan has announced that all routes belonging to the Transport for London (TfL) Road Network lying inside the capital’s Congestion Charging Zone will be subject to a 20 miles per hour speed limit as part of his ‘Vision Zero’ to eliminate deaths and serious injuries on the capital’s roads. road deaths in the capital’s roads.

The Vision Zero Action Plan, published today by the mayor in partnership with TfL and the Metropolitan Police Service, also envisages new safety standards to be implemented for Heavy Goods Vehicles (HGVs) and buses, and continuing to improve safety at dangerous junctions.

Each year, some 2,000 people are killed or seriously injured on Greater London’s roads and Khan has set TfL interim targets ahead of achieving Vision Zero by 2041. By 2022, the aim is to reduce the number of deaths or serious injuries by 65 per cent, and that by 2030 no-one will be killed in an incident involving a bus.

Today’s announcement was welcomed by Brake, which has long called for the adoption of Vison Zero and the implementation of 20 mile per hour speed limits as a way of slashing road traffic casualties.

The road safety charity’s director of campaigns, Joshua Harris, said: “With our cities getting ever more crowded, congestion on our roads increasing, and more people wanting safe cycling and walking options this strategy couldn’t be more timely and we warmly welcome the mayor’s plans.

“This stark fact should be reason enough for all to welcome the introduction of safe 20mph limits across the capital. London is setting an example the rest of the UK should follow and we urge the Government to make 20mph the default speed for built-up areas across the UK, helping make streets across the country safer and more welcoming.

“The Vision Zero approach adopted in London asserts that no road death or serious injury is inevitable, nor should it be tolerated. This is heartening for all road safety campaigners to hear, but this bold ambition must be backed by long-term and consistent action and so we look forward to working with the Mayor and TfL to ensure actions are achieved and targets met.”

The Congestion Charging Zone (below) covers only a small part of Central London – 21 square kilometres, equivalent to just 1.3 per cent of Greater London’s 1,569 square kilometres – but Khan has pledged to work with boroughs to have 20mph introduced as default elsewhere on the TfL Road Network by 2024 to cover a total of 150 kilometres of the capital’s Red Routes. 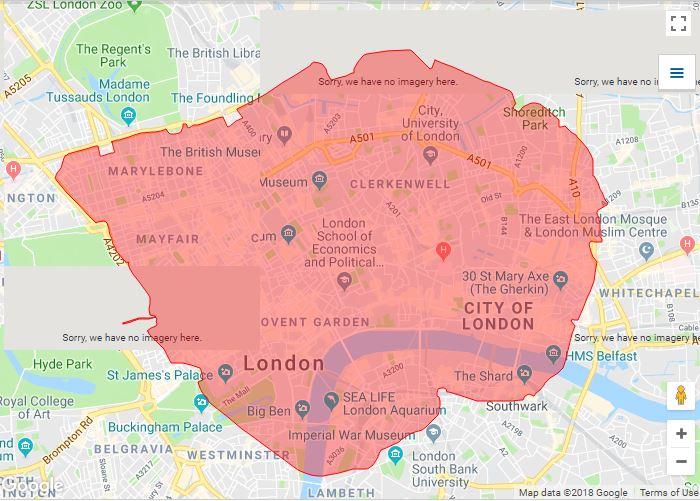 He said: “I don’t accept that deaths and serious injuries on London’s roads are something we just have to put up with. Every single death or serious injury results in heartache and tragedy for those affected, and their loved ones.

“Our bold and far-reaching plans being announced today are some of most ambitious in the world, and start from the basis that no death or serious injury on London’s roads should be treated as acceptable or inevitable.

“At the heart of our plans is reducing the dangers of speeding vehicles across London, which is why we’re proposing a new general speed limit of 20mph on TfL roads within the Congestion Charging Zone - protecting cyclists, pedestrians and all road users in the busiest part of the capital.

“The design of vehicles on London’s road is also crucial. That’s why we’re using the latest safety technologies to transform London’s buses and bringing in a world-leading safety standard for lorries, alongside investing record amounts in building new infrastructure to make walking and cycling a safe option in every part of the capital.”

Chief Superintendent Colin Wingrove, from the Metropolitan Police’s Road and Transport Policing Command, said: “The Met is working hard to reduce collisions and the number of people killed or seriously injured on London’s roads.

“We will contribute towards Vision Zero by intensifying our focus on the most dangerous drivers through the enforcement of road traffic legislation; the use of intelligence-led activity in problem locations; and we will conduct highly visible roadside operations and police patrols throughout London to amplify the deterrent effect.”

He added: “We want to remind all road users of the importance of keeping themselves safe while driving. Excess speed is an undisputed contributor to road collisions in London, and the consequences of these collisions can be devastating for those involved, their families, and communities.”