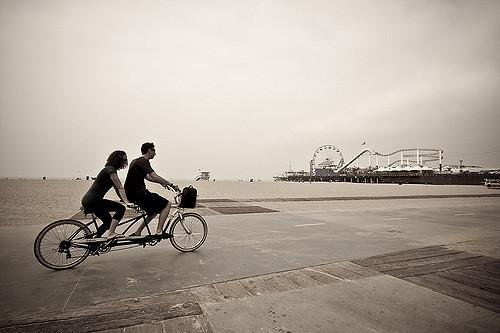 Lionel and Joyce Joseph, both aged 95, started taking bike rides together when courting during World War II
by Simon_MacMichael

A married couple from Surrey are being forced to give up riding tandem bicycles after almost eight decades because of dangerous drivers.

The couple, who live in Forest Green near Dorking, said that two close passes, the behaviour of motorists including not allowing for the extra length of their bike when overtaking and HGV traffic on B roads lay behind their decision not to continue riding together.

Mr Joseph explained: "The road has been in a dreadful state for ages because the big lorries go round there.

"The trouble is, with a tandem you have to take a bigger turn [to avoid hazards such as potholes] and it is not appreciated by drivers who go around there at 40mph.

"The roads are not designed for that size of vehicle," he said of HGVs.

The couple have been married for 71 years and Mr Joseph recalled going out cycling together while they were courting during the war.

"I was serving on HMS Eskimo, a destroyer,” he said. “We had collided with another destroyer four weeks after covering the D-Day landings, and were in dock for repairs. Hence I was on leave for my 21st birthday.

"I rode my solo bike to Ewell, collected my brother's tandem, then on to the West Middlesex Hospital at Isleworth to pick up Joyce at 2pm on the dot.

"Seventy miles for Joyce in an afternoon and 140 for me on that day, and that was after months at sea, training was not necessary."