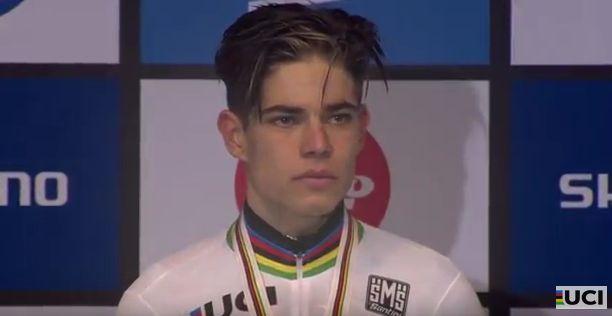 The 24-year-old had a breakthrough season on the road this year with the Belgian UCI Professional Continental team, finishing third at Strade Bianche after it receive a late wild card invitation from organisers RCS Sport.

Strongly tipped as a future Classics winner, he also achieved top-ten placings at Gent-Wevelgem and the Tour of Flanders, and finished 13th at Paris-Roubaix this season, and last month won the Tour of Denmark and the bronze medal at the European Road Championships in Glasgow last month.

However, he is believed to be unhappy with developments at the team’s management company Sniper Cycling this summer including the falling through of a planned merger with Aqua Blue Sport, which has since folded.

The latter had announced the proposed merger as a fait accompli and that van Aert would be racing for the team the following season.

However, Sniper Cycling swiftly denied that any deal had been signed, with Aqua Blue Sport subsequently cited the failure of the deal as part of its decision to wind up the team, just days before it had been due to take part in the Tour of Britain earlier this month.

The Belgian team, managed by ex-pro Nick Nuyens, has subsequently merged with the Dutch outfit Roompot, which has led to the departure of team mates including Tim Merlier as well as sports director Niels Albert – himself twice cyclo-cross world champion.

In a statement, Sniper Cycling said that van Aert had terminated his contract yesterday evening “:despite the fact that the team management tried to unblock the situation last week, eg by offering him an improved contract for 2019.

“Van Aert did not accept this proposal and has opted to terminate his contract unilaterally with immediate effect. The team management regrets that decision,” the statement continued.

Sniper Cycling added that the issue was now being handled by its lawyers.

The most likely destination for van Aert appears to be the Dutch UCI WorldTour team LottoNL-Jumbo, with which he signed a pre-contract agreement for the 2020 season earlier this year.