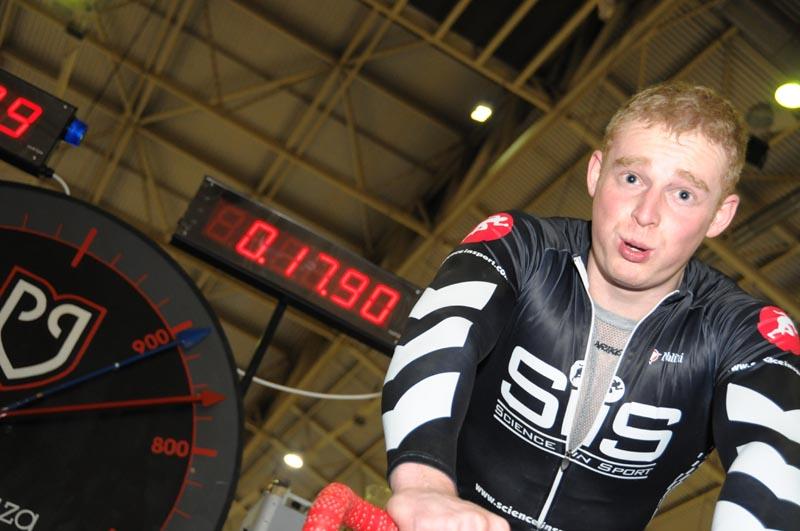 SIS rider Matt Crampton rounded off a successful night at Revolution 24 by knocking a second off Craig MaClean's previous all comers 500m record of 18.94. Earlier that evening he had set the fastest 200m time of the night on the track and finished second in the sprint final, but Matt's competitive instincts still weren't satisfied.

Hearing the Rollapaluza rig was track centre Crampton decided to attempt to beat Craig Maclean's Rollapaluza record of 18.94 seconds for the standard 500m distance. As the house lights came up a small crowd gathered around the Rollapaluza rigs and Condor bikes to witness what was to be an awesome performance.

Matt blasted out an amazing 17.90 seconds, over a full second faster than the previous best mark. "We thought Craig's record was pretty safe until tonight" said Caspar Hughes of Rollapaluza, himself one of only a dozen people to break the 20 second barrier. It remains to be seen how "untouchable" Matt's new record is as more top riders from all cycling disciplines are taking up the Rollapaluza challenge. 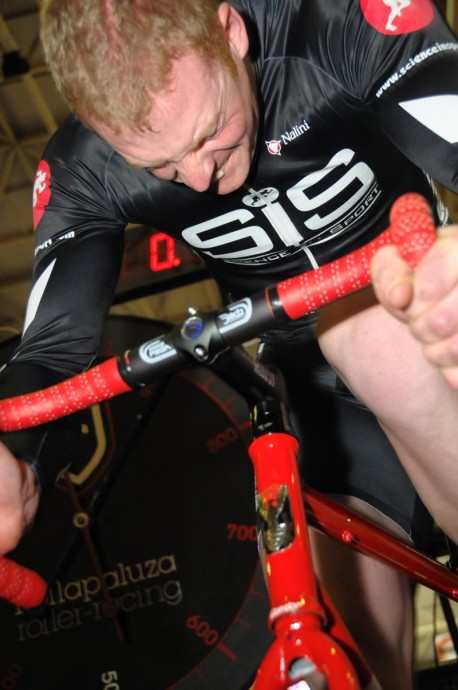 Okay, there isn't much resistance from a set of rollers, but his statistics are still fairly jaw dropping, particularly his cadence – this is an average measure and he would have been slowing towards the end, which means that at the start he may well have been hitting closer to 300rpm – an incredible five pedal revolutions per second – as it was he averaged over four revolutions a second and his top speed was pretty impressive too.

Rolling out in the Philippines

Crampton's ride wasn't the only thing the Rollapaluza crew were celebrating this week – they also did their bit for the national economy by exporting their winning formula to the Philippines.

"I’ve been following Rollapaluza on the internet and have been really impressed by the atmosphere generated by their events, and we’re looking forward to promoting similar events here in the Philippines" says David.

As part of the franchise package Rollapaluza will be providing a custom-built rig for David and his team as well as training, support and licensing.

"We’ll be travelling to Manila to train David’s staff and oversee the launch event" explained Paul Churchill of Rollapaluza "we’re really looking forward to this, it’s great to be contacted by someone who shares our vision of our safe, fair and fun form of cycling"

"The rig we’re sending will be identical to our rigs, which means race times will be comparable, so hopefully we’ll foster a friendly rivalry between the two nations" explained Rollapaluza’s Caspar Hughes.

Their franchise in the Philippines is, Rollapaluza hope, the first of many they hope to launch in 2009. To find out more check out the Rollapaluza website.