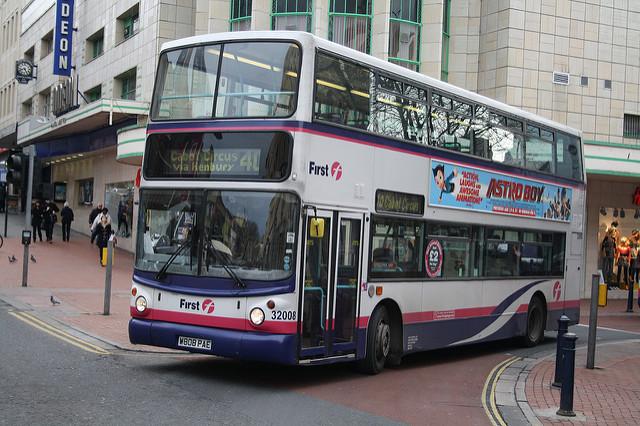 A Bristol cyclist who was nearly crushed between a bus and a 4x4 has spoken of his frustration after his complaint about the driver who pulled out on him was lost by operator First Bus.

Footage of the incident, which took place in Clifton on December 18 last year, has been published on the Bristol Post website.

Jake Johnson was riding along Regent Street when the driver pulled out from Merchants Road. He was left with a narrow gap between the bus and a vehicle parked with its hazard lights on.

Johnson caught up with the vehicle at a later stop. The driver said he didn’t see Johnson at the junction and accused him of approaching the bus from behind.

Johnson said of the incident: "I was, and still am, shocked really. I have a number of different lights and quite a bit of high-vis clothing so was really visible, but it's clear that he just didn't look before pulling out.

"I can only describe it as completely careless, oblivious. Unfortunately cyclists have to deal with this sort of thing quite often, but for someone who drives in a professional capacity to do this is really worrying. We should be able to expect better from drivers for a major bus company.

"I am a really keen cyclist and this hasn't put me off completely, but I travel through there three or four days a week and I do find myself tensing up in the area and thinking about what could happen.

"I was shaken up the whole way home and for a few days afterwards. I've had quite a few near-misses in my time but this was genuinely quite scary, for a moment my mind did jump to the worst-case scenario."

Johnson logged a complaint with First Bus, but upon chasing it discovered that it had been lost after being sent to the wrong depot.

"Even though the video is out there for all to see online, and speaks for itself really, I've not had any kind of apology or consolation from First,” he said. “Throughout the whole complaints process they've been very cold and quite calculated in a way.

"It's so frustrating to hear that the complaint has been lost in this way – it makes me think that if I hadn't checked up on it would have just disappeared.

"Incidents like this really need to be taken seriously, and the way this has been handled seems to suggest that they're not looked into as far as they should be."

Police have twice issued warnings to First Bus in recent months after footage emerged of its drivers making close passes on cyclists.

Ian Coyle, Operations Director for First West of England said: “We would like to apologise to Mr Johnson for the delay in responding to his complaint, and will make contact with him to discuss the matter in more detail.

"The standard of driving shown in this video is not what we aspire to, and the matter has been dealt with internally in accordance with our driving policies. Incidents like this are rare, but we take them very seriously when they do occur.

"We will be asking for Mr Johnson’s permission to use this video to assist with driver training, to prevent similar incidents from occurring in future.”