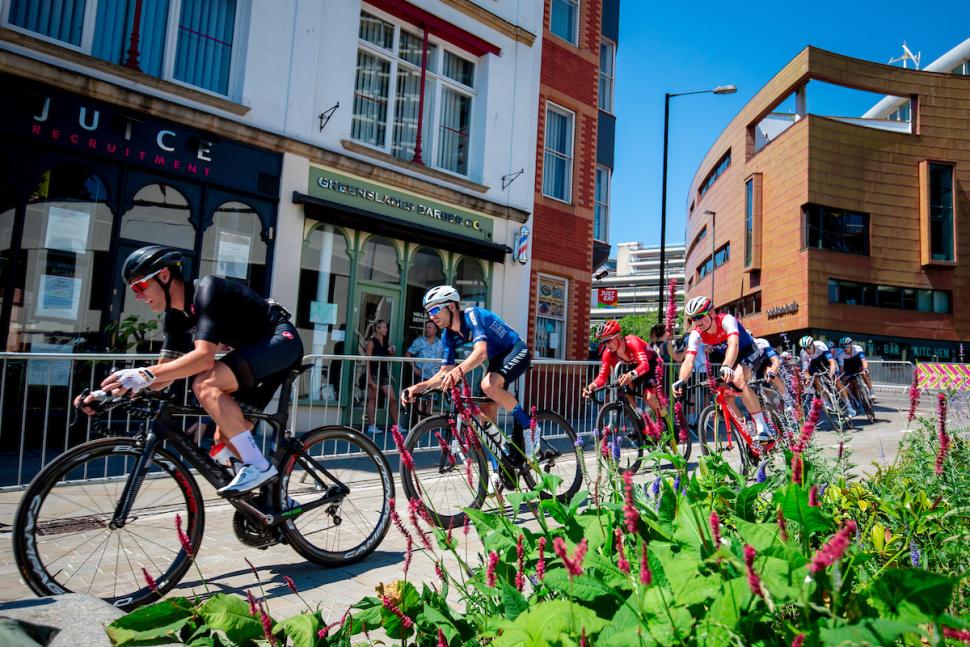 In previous years, the events have been held under the umbrella of the Bristol Grand Prix, whose organisers – Bristol-based cycling collective Le Sportif – said earlier today on Twitter that the event had been cancelled this year, giving some users of the social network the impression that there would be no elite racing there at all this year.

However, British Cycling has since clarified that the two men’s and women’s events, plus the family-friendly Let’s Ride, will take place on Sunday 16 June, although Bristol Grand Prix will not be involved.

Last year, both races were included in the respective National Road Series calendars for the first time, as was the Let’s Ride event. The women’s race will switch to the new National Circuit Race Series this year.

There was also a men’s category 3/4 race, but it is currently unclear whether that will feature on this year’s programme.

There has also been a change to the route of the men’s National Road Series race – held last year on a 6-kilometre loop in the city, rather than the shorter criterium circuit used in the other races, with the race heading out of the city before returning for the finale.

In a statement released this afternoon, British Cycling said that it had discussed its “new vision” for how the event should develop with Bristol GP, who had decided to cease their involvement.

“In response to feedback from teams and riders regarding last year's Bristol Grand Prix, British Cycling has been working with Bristol City Council to develop a road race format which would see the round of the HSBC UK National Road Series – Men follow a similar route out of Bristol to last year's Tour of Britain stage in the area,” the statement said.

“Unfortunately – and after much discussion – the organisers of previous years' Bristol Grand Prix events have declined to partner with us to deliver this new vision for the race. We respect that decision, thank the Bristol Grand Prix organisers for their support and wish them well for the future.”

The national governing body was responding to a statement published this morning on the Bristol GP website, which among other things, said: “As a race we have found that our objectives and our ethics are irreconcilable with the requirements of the governing body.

“The restrictions that are placed upon the race both undermine women’s racing and prevent us from including youth riders and local riders and clubs being part of the day.

“Additionally as race organisers we are being forced out of our race due to unfavourable conditions imposed upon us,” they added, without specifying what those conditions were.

It’s by looking at changes between the 2017 and 2018 editions that best explains the difference in opinion between British Cycling and Bristol Grand Prix about how the event should evolve, however.

The elevation last year of the headline men’s and women’s races – the former for elite and category 1 and 2 riders, the latter also open to category 3 licence-holders – to the respective National Series calendars saw the Bristol Grand Prix move away from its grassroots origins, with a number of races dropped.

In 2017, the third edition of the event had included a men’s masters’ race, mixed youth races for under-14s and under-16s, category 4 men’s and women’s races, a category 3 men’s race, a sponsor team relay race, and a family-friendly ‘ride a lap’ event – none of which featured last year.

This morning’s statement from Bristol Grand Prix made no mention of British Cycling’s intention to continue with the National Series races, resulting in some outlets – including road.cc on our Live Blog earlier today – reporting that they had been cancelled.

In an article published this afternoon under the headline Bristol Grand Prix cycle race cancelled over safety fears, Phil Adkins, the event’s founder, said that with the men’s road race heading out of the city, the £30,000 cost of police escorts and associated safety measures made it unviable.

“It's frustrating because we have worked really hard for this and it's our passion project. But all our good intentions get lost in the grind of politics,” he said.

British Cycling said in its statement that it “will now work with Bristol City Council to identify the best delivery option for the scheduled women's circuit race and men's road race on June 16, which would both complement and run alongside our free, family-friendly HSBC UK Let's Ride festival on the same day – ensuring a wonderful celebration of cycling for the city of
Bristol.

“Fans of cycling in Bristol can be reassured that all of these events will take place on June 16.

“Alongside our valued network of event organisers, we are committed to ensuring that this event – as with all other in our series – is a true showcase for the sport, provides the very best experiences for existing teams, riders and spectators, and engages with local communities, while also continuing to broaden cycling's appeal in a sustainable way,” the governing body added.