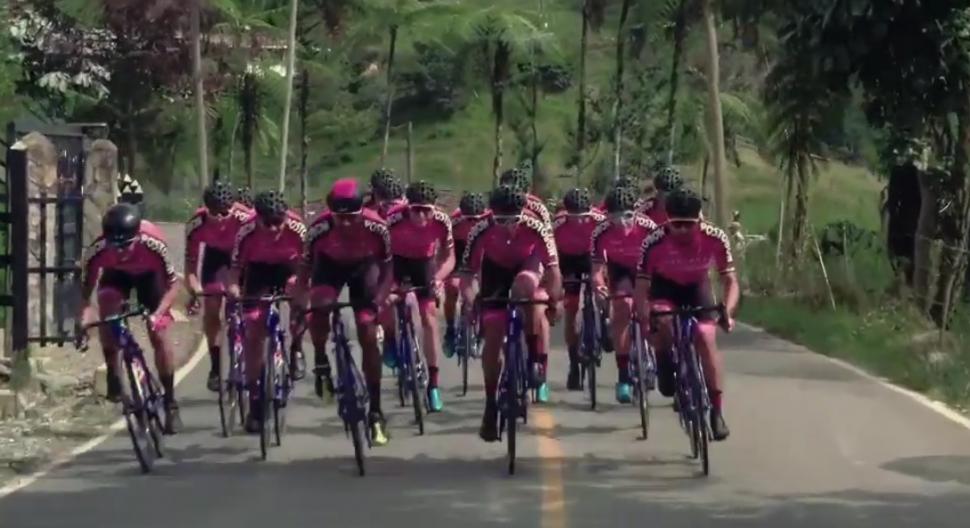 Team has previously been home to the likes of Nairo Quintana, Esteban Chaves and Sergio Henao
by Alex Bowden

Manzana Postobon, the Colombian Pro Continental team that played a role in developing riders such as Nairo Quintana, Esteban Chaves and Sergio Henao, has folded with immediate effect. The owners said the team had tried to be flag bearers for ethical cycling and fair play and therefore couldn’t continue in light of two recent doping cases.

In April, the team terminated Wilmar Paredes’ contract after the UCI announced that he had tested positive for EPO.

According to UCI anti-doping regulations, the team was due to be suspended for a period of between 15 and 45 days having returned a second adverse analytical finding within a 12-month period.

Cycling News reports that Manzana Postobon initially stood by Amador, merely suspending rather than firing him, but the owners have since taken the decision to close the team.

Alejandro Restrepo Echavarría, the president of the Pedeleamos por Colombia corporation that owns the team, explained said that since its inception in 2006, the not-for-profit team had attempted to be, “flag bearers of ethical cycling, fair play and doping-free competition.”

He said that the importance of being good role models was always impressed upon young riders.

"Due to the regrettable facts presented in the past weeks, in which athletes belonging to the professional cycling team have been implicated, we have taken the decision not to continue with the squad, and from now on the team will not participate in the races scheduled on the national and international programme.

"We must thank all the sponsors who put faith in the team and supported us over the years. Without you, it wouldn’t have been possible to have achieved all the milestones we set ourselves. We had more, but, unfortunately, that problem that lingers in sport prevented us from moving forward."

“The Corporation invites the society as a whole, from national entities like Coldeportes and the Colombian Cycling Frederation, to professional and recreational athletes and fans of cycling, not to give up on the intentions we always believed in, because we are convinced that clean sport has the capacity to give us great triumphs and make us experience great things as a country.

“From the Corporacion Corporación Pedaleamos por Colombia, we call on the county’s athletes and cycling teams to strengthen their commitment to the fight against doping, to increase internal testing, to train riders comprehensively so they look after themselves and others. That is the best way to avoid situations like the one that today sees us say goodbye to cycling.”

1
Five cool things coming soon from Garmin, Canyon, Continental, Mavic and Ale
2
Cycling club chairman complains of being held up by cyclists riding two abreast
3
Aldi is selling a folding bike for £300 – but if you want one, you’d better act quickly!
4
Near Miss of the Day 449: Cyclist gets very close pass from driver of bus ... operated by company that has given its drivers close pass training
5
UK cities where cyclists feel most unsafe ranked in new survey - where does your city rank?
6
‘Vigilante’ anti-cyclists accused of removing wands on pop-up bike lane in Hove
7
Met Police say they want cyclists to wear cameras and report traffic offences
8
Cyclists say they were deliberately hit by beeping, swearing hit and run driver