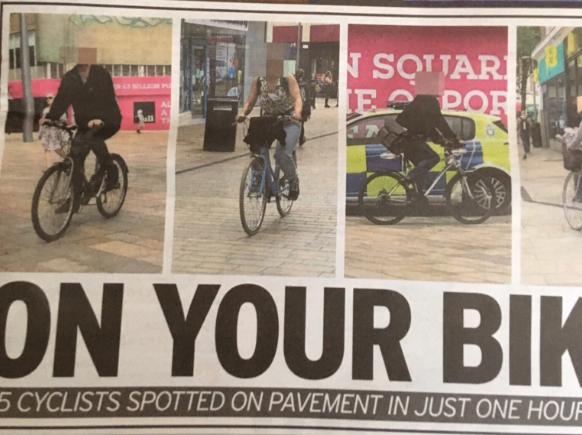 Hull Live says it apologises “for any distress caused”
by Simon_MacMichael

A Hull newspaper has issued a retraction of an article in which it wrongly claimed that cyclists are banned from riding bikes in parts of the city centre.

The story, originally reported by Hull Live, was a front page lead on the Hull Daily Mail last month.

But as we reported on Saturday, once readers pointed out to the council that there was no longer any such ban in place, the article was deleted from the newspaper’s website.

Our story was picked up by trade publication The Press Gazette, which ran a piece on it yesterday, and subsequently Hull Live published an article under the heading Cycling in the city centre: A clarification.

It said: “On Saturday, June 29, the Hull Daily Mail and Hull Live ran a story about cycling in the city centre.

“We said that we had seen 55 cyclists riding in pedestrianised areas. This was incorrect.”

But the newspaper put the blame on the local council, saying: “An outdated map on the Hull City Council website showed the areas we used were out of bounds to cyclists.

“Hull City Council has confirmed that several areas in the city centre are shared zones for pedestrians and cyclists and that it will remove the old map.”

It quoted a council spokesman as saying: "As part of the city centre’s Public Realm improvements in 2017 several areas were turned into pedestrian and cycle zones. This included Public Realm areas in King Edward Street, Jameson Street and King Edward Square.

"The intention was to support the City Plan and the Tourism Strategy to ensure the city was pedestrian and cycle friendly, as can be seen in most European cities where it is normally a safe area for cyclists, skateboarders and pedestrians to co-exist.

"We expect all cyclists, residents and visitors to use the city centre spaces respectfully and with consideration for other users."

Hull Live added: “We are happy to clarify this error and apologise for any distress caused.”