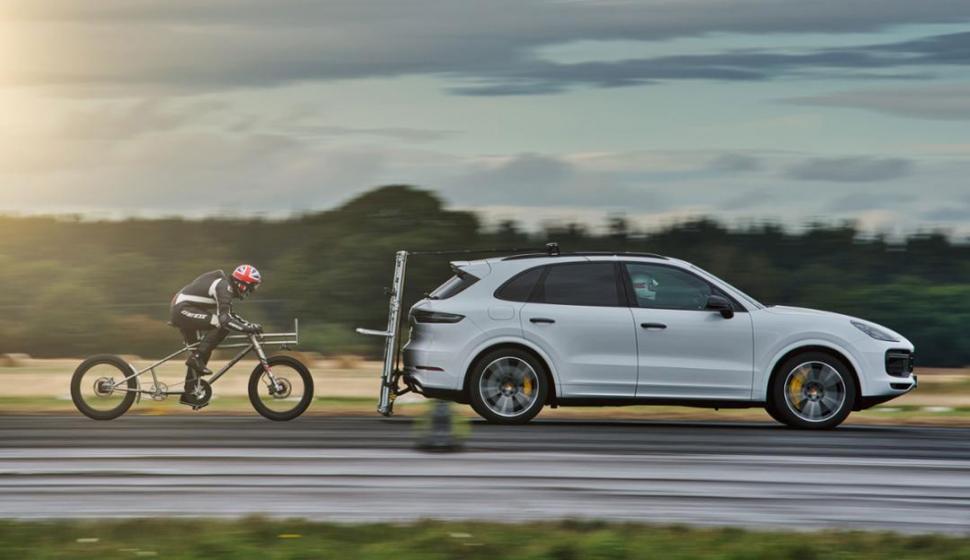 Essex-based architect Neil Campbell will next weekend attempt to break the Guinness World Record for the highest motor-paced speed ever achieved on a bicycle by a man.

The existing record of 268.8 kilometres an hour (167 miles an hour) has stood for almost a quarter of a century, having been set by Fred Rompelberg of the Netherlands at the Bonneville Salt Flats in Utah in 1995.

That’s the record that Campbell will be targeting at Elvington Airfield, North Yorkshire, England, where last September he broke his own European motor-paced record, hitting a speed of 239.8 kilometres an hour (149 miles an hour).

As on that occasion, his latest record attempt will see him draft in the slipstream of a Porsche Cayenne, reports inthebunch.co.za.

“I’ve harboured the long obsession to attempt to ride that fast since then. It was only when Guy Martin broke it [the British record] that it became apparent that I should get on with it.”

Ultimately, Campbell plans to target the world record set last September by Denise Mueller-Korenek, with plans for a future attempt on it at Bonneville, where last year she rode at 296 kilometres an hoiur (184 miles an hour).

He acknowledges it “would be impossible to attempt that in the UK on such a short [3km] runway, but the men’s record still stands and is there to be beaten in the meantime.”

“Besides that, we’ve been told so many times that it can’t be done in the UK and we’re doggedly determined to prove that with a little ingenuity and brave pills it can be.”

He acknowledges that there are risks, however, saying: “For this to work the planets really will have to align. So much can go wrong and the stakes are high, not to mention having the British weather to contend with.

“We simply don’t have the distance to get to top speed and in reality only have 400m to get back to 0 kilometres an hour, hence the parachute,” he added.