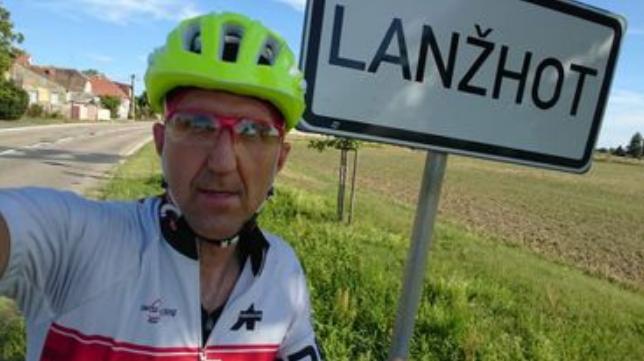 An ultracyclist from Switzerland is claiming a new Guinness World Record after riding  through 16 European countries in six days.

Stéphane Cand, from the Canton of Fribourg, crossed the border between Belgium and the Netherlands on Saturday lunchtime, a day ahead of schedule, reports the Brussels Times.

His total of 16 countries visited by bicycle within a week eclipses the previous Guinness World Record of 14, held by the Polish cyclist, Marek Dzienisiuk.

“I got every type of weather you can think of,” he said after crossing the final border at Mouland, which lies between Liege and Maastricht.

“It was 44 degrees in Hungary and sometimes only three degrees going downhill.

“I didn’t think I was going to do it, but I’m very happy I did. It’s the best thing I’ve ever done, although my main aim was just to travel and enjoy it.

“I’m still in shock, it’s just hitting me now that I actually did it in seven days instead of six.”

Despite the 47-year-old’s journey reaching its conclusion in one of road cycling’s heartlands, he said he was “surprised by the state of the roads, with the Ardennes classics being so well-known I thought they would be better.”

Cand, who got by on between three and four hours’ sleep a night, said that a doctor had helped him prepare for the rigours of the journey.

“I worked closely with the doctor when it came to food and sleep,” he explained. “I was told to eat salty food while on the road and tests showed that two and a half hours of sleep was enough to cycle for the rest of the day.

“I did have to cycle for 36 hours non-stop because of delays, but everything went fine.”

As for training, the 140 kilometres he commutes each day helped. “The vélotaf [commuting] and the 16,000 kilometres experience I have accumulated since the beginning of the year really made a difference and helped me pull this off.

“The fact that whether it’s raining, snowing, whatever, I get on my bike and go to work was a huge advantage.”

Cand is now collating proof of his record attempt to submit to Guinness World Records for ratification.