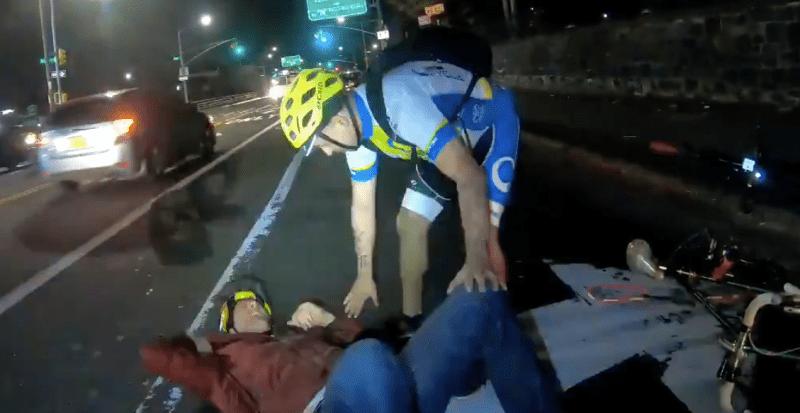 A cyclist in New York City captured on video the moment another rider was hit from behind by a hit-and-run motorist driving a minivan as he waited at a red traffic light in Queens.

Cycling campaigners say that the footage illustrates how the bike lane at the location puts riders in danger, with one rider describing the location as a 'murder strip'.

The incident happened at around 6pm yesterday evening on Greenpoint Avenue close to the junction with the Long Island Expressway, reports Sunnyside Post.

The driver of the silver Toyota Sienna involved failed to stop at the scene and drove through the red light as they sped off.

The cyclist who filmed the incident and posted footage to Twitter said that the driver of the minivan had collided with several other vehicles both before and after veering into the bike lane and striking the cyclist.

Both she and another cyclist stopped to help the rider who had been hit, and who was screaming in pain.

She said that New York Police Department officers who attended the scene reviewed the footage and gave her an email address to which it could be sent.

According to police, the cyclist who was struck was a 36-year-old male who was complaining of back pain after being hit, although officers were unable to confirm whether he had been taken to hospital.

Streetblogs NYC said that the incident happened at a “notorious stretch of Greenpoint Avenue in Long Island City that safety advocates have long complained about.”

The website added: “Cyclists have long complained about the northbound stretch of Greenpoint between the Greenpoint Avenue Bridge and the LIE [Long Island Expressway] because drivers often speed on the narrow roadway, which widens near Calvary Cemetery to accommodate two lanes of cars — with a painted bike lane in between them.

“The design allows one lane of drivers to continue straight into Sunnyside while the other lane turns right to get on the highway. But cyclists are often getting squeezed or bullied.”

It added that in 2018, there were 19 reported collisions at the location concerned, with one cyclist and one pedestrian injured.

One person replying to the post on Twitter described the bike lane as a “murder strip” – a reference to “moordstrookje” – chosen last year by dictionary publishers Van Dale as the Belgian/Flemish Word of the Year 2018 and defined as a painted bicycle lane on a dangerous street next to fast-moving cars.

Indeed, it's a horrible murder strip (quite literally), and @NYC_DOT knows it. I expect to get killed there every single time I ride home from Brooklyn. It's harrowing, drivers there are 'speed drunk' from crossing Greenpoint Ave bridge at >60mph.