Near Miss of the Day 332: Oncoming driver *skims* cyclist without slowing

Today’s near miss is about as close as they come. Driving on a narrow country road, the motorist appears to make no effort to slow down or in any other way make allowances for a large group of cyclists who were coming the other way on a Sunday club run.

The incident occurred on Messuage Lane in East Cheshire in November last year.

Jeanette, the cyclist who was skimmed by the car, said: “We were a group of nine cyclists riding two abreast and I was in the last pair, on the outside, with just one rider (with the camera) behind me.

“There was perfect visibility and the driver was going very fast, but he did not slow at all or move to left as he approached.

“The cyclists in from shouted ‘car down’ and we attempted to single-out, but I did not have time due to his excessive speed – although you can see from video that I was in the process of moving to left (thank God). 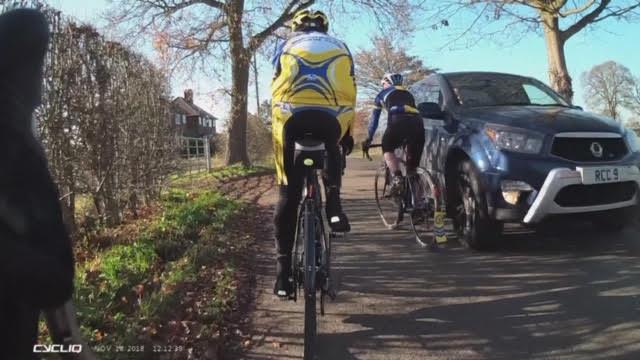 Jeanette sent the video and a statement to Cheshire Police. “An officer told me it was the closest near miss he had seen and they would prosecute.

“Unfortunately, due to an admin error, the notice to the registered owner asking who was driving did not get sent within 28 days. (It was sent to me instead and I assumed I’d just been copied in).

“When I asked police how the case was progressing they realised their mistake, but by then it was too late apparently. How ridiculous.

“Anyway, the police officer was very upset and apologetic. He kept in touch with me and apologised and told me how I could make an official complaint against the police but I chose not to.

“He did visit the registered owner with the video to show him and have a word, but was told he was in Australia for a month.

“He left messages asking him to contact police on his return but he never did, so he got away scot-free despite almost killing me.”