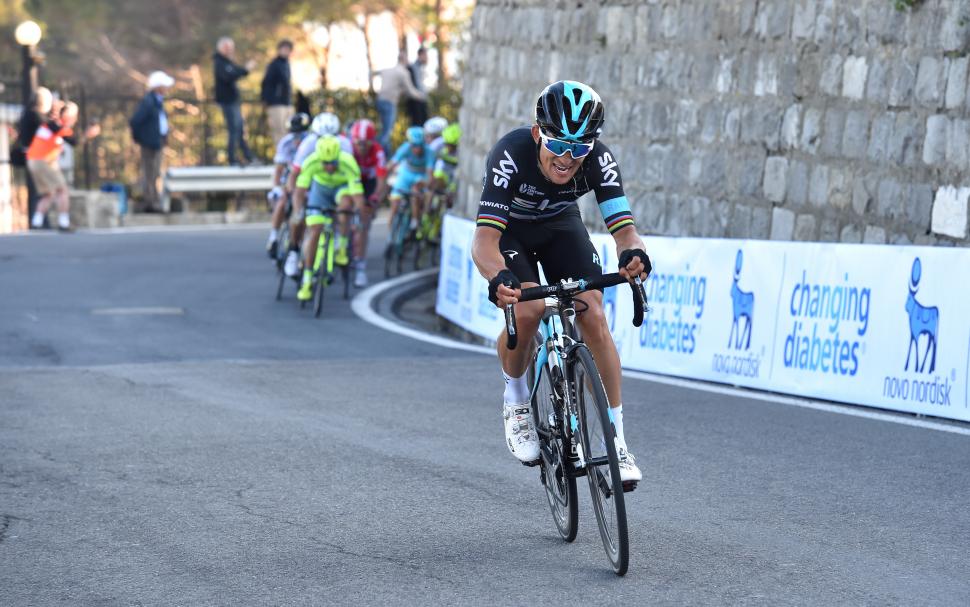 Michal Kwiatkowski on the Poggio in 2016 Milan-San Remo.JPG

Climb crested 5.4km from finish is often the launch pad for race-winning attacks
by Simon_MacMichael

The Poggio climb, so often decisive in determining the winner of Milan-San Remo, is at risk of being left out of next year’s 111th edition of the race due to landslides.

Riviera24.it reports that the road leading up to the summit, Via Duca d’Aosta, has been closed indefinitely by local authorities who are concerned that recent heavy rains are causing the situation to worsen.

The route had already been partially closed to traffic in recent months with ANAS, the Italian government agency responsible for building and maintaining the country’s roads, asking the local council in San Remo to monitor the road’s retaining wall, which resulted in works being carried out to consolidate it.

However, sensors placed at key points in the wall have revealed that movement towards the coast below is still happening and, given the horrendous weather the Riviera has been experiencing, there was no option but to close the road on safety grounds.

This week, officials will inspect the site with a view to being able to determine when the road might be reopened.

However, with works to strengthen the wall expected to cost more than €10 million, there are serious doubts that it can be carried out before next year’s race, which takes place on Saturday 21 March.

San Remo’s mayor, Alberto Biancheri, said: “During the week, further checks will be carried out, but we have already requested an urgent intervention by ANAS and the Liguria Region to protect the soil and prevent hydrogeological instability on the entire slope.”

He added that the recent heavy rains had exacerbated the situation and that further rainfall is expected.

The summit of the Poggio comes just 5.4 kilometres from the finish of the race, which in 2015 returned to its traditional location on Via Roma.

Coming so late in the race, the climb inevitably attracts attacks, some solo, others of maybe two or three riders. Some are reeled in, often in the closing couple of hundred metres as the race comes down to a select sprint.

Others, however, prevail – as happened during Michal Kwiatkowsi's 2017 victory after he followed a move from Peter Sagan, last year when Vincenzo Nibali won, and in March when Julian Alaphilippe prevailed.

Should the Poggio be missing from next year’s race, then based on the current route, the final climb would be the Cipressa, crested 25 kilometres out, which would then favour the sprinters.

One option – very much depending on its condition – might be to replace the Poggio with the Pompeiana climb, the summit of which would come with less than 15 kilometres to go.

That climb had initially been announced as featuring in the 2014 edition of the race, but a month before the race a landslide forced organisers to revert to the combination of the Cipressa and the Poggio.

In 2016, the route had to be diverted while the race was in progress after several cars were damaged and two tourists injured due to a rockfall between Genoa and Arenzano.