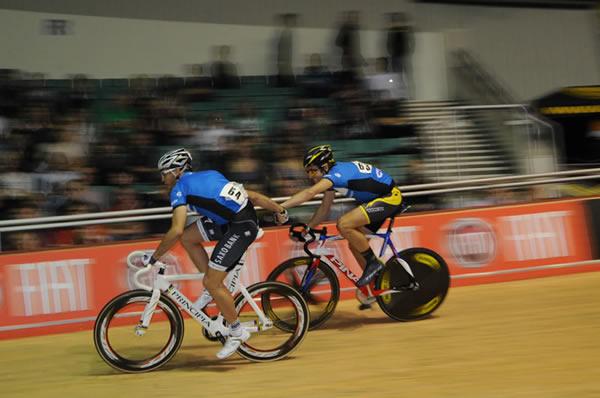 Maxgear to the fore at Revolution 30‏

"Crazy fast" Madison is highlight of another action-packed night...
by Mark Appleton

Last night’s Revolution 30 event at the National Cycling Centre featured some of the continent’s most prolific six-day riders, as well as a strong British contingent, including Team Sky’s Geraint Thomas.

Team Sky set out to dominate proceedings from the very first event, the Devil Scratch Race. The pace was quick from the start, with big names like Franco Marvulli and Alex Rasmussen unable to handle the tempo and finding themselves eliminated. With some strong turns on the front as the race turned into a Scratch event, the group pulled back an impressive attack by Christian Grassman and Ben Swift took an emphatic victory.

The Future Stars proved to be as competitive as ever, with Sam Lowe, Matt Rotherham, Emily Kay and Jess Crampton really standing out throughout the evening. In the first ever Future Sprint, Matt Rotherham took top position in qualifying, and continued his dominance throughout the heats. In the final, he again proved too much for Alex Minting; Rotherham is certainly one to watch for the future.

In the Girls’ competition, Emily Kay proved she has a great race brain already with a clever elimination race. She managed to avoid any trouble in the early stages before pipping Amy Roberts on the line.

DHL Future Stars leader Sam Lowe suffered a surprise upset in the first boys’ endurance event, the 5km Scratch Race. Jacob Ragan’s early attack stretched some legs but after the race bunched back together, some dithering ensued. Another attack from Owen James had similar effects to earlier, but it was soon time for Sam Lowe to attack, followed by Harry Tanfield who eventually took Lowe on the line. Jacob Ragan came in third.

The crowd were also treated to a bizarre rendition of ‘Angels’ by Robbie Williams, sung by Six Day rider Sebastian Donadio. Saturday night for many is X Factor night, but in the National Cycling Centre, we had Argentina’s equivalent. He entertained the crowd with some impressive singing, and even brought his own keyboard along.

In the DHL Future Stars Boys’ 6 Lap Dash, Lowe had opportunity to take revenge and flipped the earlier result, taking the win over Harry Tanfield, who had to settle for second.

In the 15km Points Race, early moves from the continental riders Sebastian Donadio and Franco Marvulli signalled intent. The Team Sky leadout train enabled Swift to accumulate 10 points throughout the sprints, even when his team mate Kennaugh retired, perhaps suffering from his earlier crash. Donadio needed to keep a grip on the race and fought hard and managed to edge over Swift in the penultimate sprint. The last sprint involved seven riders who got away, but none of whom were in the general standings. So it was Donadio, fresh after a bit of song, who took the overall win; an impressive show on all accounts.

As the race programme went back to the DHL Future Stars competition, it was the turn of the Girls’ 5km Scratch Race. Emily Kay again demonstrated her impressive race brain, spotting the danger of Alice Barnes’ attack, leading the gallop and taking the victory over Amy Roberts and Lucy Garner.

In the DHL Future Stars Boys’ Elimination Race, you guessed it, Sam Lowe was the dominant figure and took the win over Harry Tanfield and was able to retain his series leader’s jersey. Ryan Mullen rolled came in third and kept Lowe and Tanfield on their toes.

In the Girls’ 6 Lap Dash, Jess Crampton managed to get one up on series leader Emily Kay. It was a narrow victory, but a good victory all the same. Kay, fortunately, had already done enough to keep her series leader’s jersey.

The highlight of the evening was no doubt the three-man Madison, which proved to be fast and furious. 80 rapid laps seemed to go in no time at all. “That was crazy fast,” said Dean Downing after the event. Maxgear looked to be ahead with a team of Adam Yates, Simon Yates and Leif Lampater. But when it came to the final sprint, another fantastic performance from Franco Marvulli, who stood out throughout the night, meant that the Le Col team took final victory. Young hopefuls Andy Fenn and Jon Mould helped Marvulli in an impressive three-man team victory.

The three-man teams meant that the race was a lot quicker than usual, as riders had more rest and changes were more frequent. Marvulli’s experience in the Madison event certainly helped stamp his dominance on the race.

The last race of the evening was the DHL Future Keirin, which gave another platform for sprinters of the future to prove their worth. Many of the competitors have come through the DHL Sprint School initiative, which teaches youngsters many of the advanced tactics required in sprinting.

Matt Rotherham is someone who has certainly been listening to his sprint coaches, and again proved he is the one to watch in this competition. He had the position he wanted behind the derny and wouldn’t give it up under any circumstance. When the derny pulled off, Rotherham charged from the front, keeping the chasing Ryan Whatmough and Alex Minting at bay.

That signalled the end of another exciting Revolution event at the National Cycling Centre. Matt Rotherham’s Future Sprint performances, Jess Crampton and Jacob Ragan’s Future Stars success joined with some impressive Madison performances meant that Maxgear edged Team Sky off the top of the Revolution Championship.

The Revolution returns on the December, with tickets available now through cyclingrevolution.com.