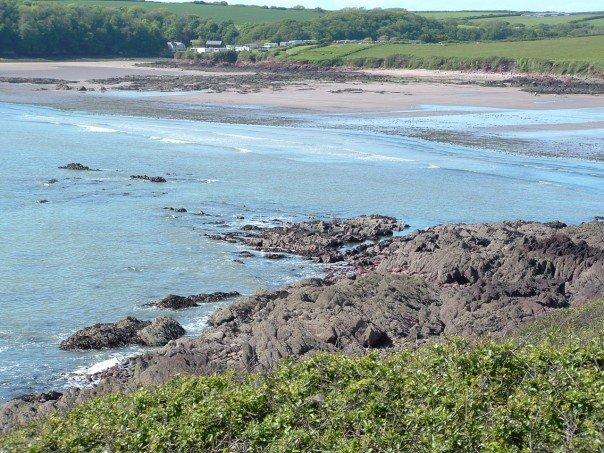 She might not have picked the best day for it but today Welsh Environment Minister, Jane Davidson, joined cyclists walkers and horse riders in south Pembrokeshire to officially open the latest section on the Wales Coast Path.

The 5.5 mile (9km) route is part of the Castlemartin Range Trail and brings the Assembly Government a step closer to achieving its goal of creating a coastal path that spans the entire Welsh coast by 2012.

Castlemartin Range, on the south Pembrokeshire coast – familiar to those who took part in the Tour of Pembrokeshire sportive this year – is used by the Ministry of Defence for the pre-deployment training of crews operating heavy armoured vehicles in Afghanistan. The Trail provides a marked route, access gates and fencing to provide a safe and enjoyable route around the range.

The Minister said; “I am delighted to officially open this stretch of coastal path that improves access for walkers to this part of the world famous Pembrokeshire Coast National Park. The area enjoys spectacular sea cliffs, home to the largest concentration of breeding seabirds on the Welsh mainland, grassland which supports many rare inspects and a wide variety of flora.

“The coast of Pembrokeshire was recently voted the second best coastal destination in the world by the National Geographic Society. This recognition illustrates the international significance of our spectacular landscape and I am sure that, when completed, the path will be a draw for tourists from all over the world.

“However the Wales Coast Path is more than just a tourist attraction. This new stretch of path will provide local people with new opportunities to get active, in line with our Change4Life programme, whilst enjoying stunning scenery.”

Commander Defence Training Estate Wales & West Midlands Colonel Richard Howard-Gash said: “Supporting our Armed Forces is the top priority for Defence Estates and training areas, such as Castlemartin, are vital elements in helping our troops prepare for operations in Afghanistan.

“The Castlemartin Range Trail allows us to balance the pressing need for military training with the desire of walkers, cyclists, horse riders and others to enjoy this area of spectacular beauty.”

Access Programmes Manager Sue Rice of the Countryside Council for Wales (CCW) who manage the Coastal Path project said:
"We would like to thank all the partners, the local authority Pembrokeshire County Council, the Pembrokeshire Coast National Park and the team at the Welsh Assembly for all the hard work that they have put into making the path happen. The work on the ground is key if we want to achieve our target of path completion by 2012."

Under the Coastal Access Improvement Programme (CAIP), the Welsh Assembly Government is committed to creating a continuous 850 mile path that runs around the coastline of Wales by 2012, and has been investing in access improvements in partnership with the Countryside Council for Wales. The path is on target for completion in 2012. CAIP funding of £2 million per annum has since 2009 been supplemented by Welsh European Funding which totals £3.9m over 3 years, to support development of the Coast Path by 2012.