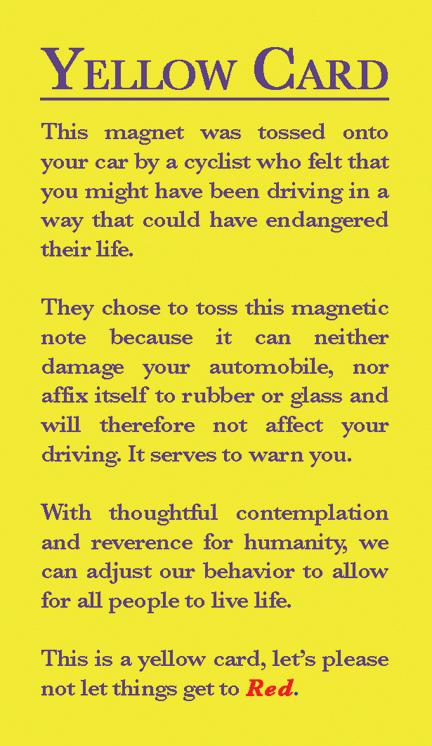 Artist's concept seeks to foster understanding, but could it inflame already tense situation?...
by Simon_MacMichael

An American artist has devised a magnetic sticker that can be used by cyclists to alert drivers to the fact that their driving might be putting cyclists at risk, although going by the comments on one website, opinion is divided about whether they might in fact make matters worse.

Peter Miller, who according to his website studied in Chicago and now lives and works in Cologne, describes the yellow cards, which come with a magnetic backing, as a “subversive intervention via business card-sized magnets, personal edition of 200.”

He has made the project open source, meaning that anyone can use the design and wording – it can be downloaded as a PDF here – although of course you’d have to find your own supplier to make up the magnetic card itself.

“This magnet was tossed onto your car by a cyclist who felt that you might have been driving in a way that could have endangered their life.

“They chose to toss this magnetic note because it can neither damage your automobile, nor affix itself to rubber and glass and will therefore not affect your driving. It serves to warn you.

“With thoughtful reverence and contemplation for humanity, we can adjust our behaviour to allow for all people to live life.

“This is a yellow card, let’s please not let things get to Red.”

Some, however, wonder whether the cards might send out the wrong message, if the comments on the blog Boing Boing are anything to go by. While the cards are meant as an alternative to say taking a D-lock to the errant driver’s windscreen, several commenters maintain that slapping a magnet on a car could inflame an already tense situation, although most comments fall very much into the anti-cyclist camp.