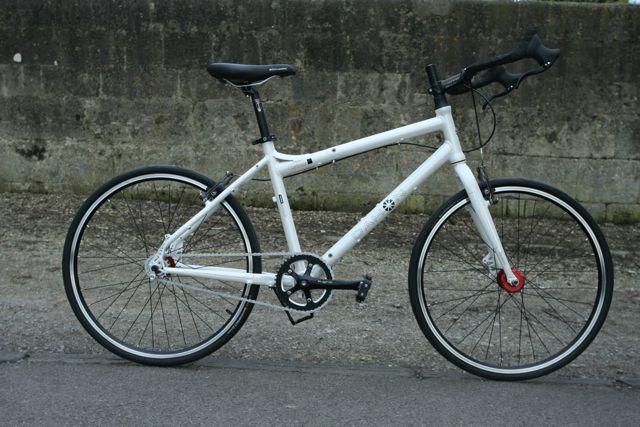 Dahon's urban singlespeed/fixed MTB derived, folder, it sounds different… and it is
by Tony Farrelly

Dahon first unleashed the Cadenza Solo at Eurobike a couple of years back and I've been keen to get one in for test ever since… now here it is.

Dahon call this as an urban utility/sports bike. Basically it's a 26in singlespeed/fixed that folds and while that might not at first seem like a big cycling niche waiting to be filled – indeed the Dahon website aims the Cadenza's Solo at an even tighter niche, claiming that it's “Perfect for Running errands in the lower Mission District before a burrito break.” – there's not doubting that:

However while these two bikes may be aiming for a similar market they come from very diffferent places – the Giant is Moultonesque and the Dahon, on first sight at least, has something of the MTB jump bike about it. It is certainly ruggedly built: claimed weight of our test bike is a sturdy 11.3KG (24.5lb). We'll give you the spin on what it's like to ride in a future test report as soon as we can get over to Mission Street.

In the meantime check out the Cadenza Solo gallery and here is our pick of the spec highlights.

As the name suggests one gear is all you get on the Solo. Wherever you go you'll be pushing a 61in gear – a combination of a Sugino 44T chainset turning a 16T cog. A flip/flop hub is standard issue on the Cadenza Solo; ours came without a fixed sprocket which is a shame. The rear dropouts are vertical and chain tension is maintained courtesy of an adjustable eccentric bottom bracket. The rear dropout also has mounts for disc brakes, mudguards and a rack.

There's plenty of adjustability in the ride position too thanks to those cut off handlebars which work at a number of different angles; and which are height adjustable too thanks to Dahon's adjustable F.I.T. stem which can be moved up and down the steerer at the turn of an Allen key – make sure you do it up to 17NM afterwards though…

A couple of quick rides suggests that the handlebars are comfy enough, but as with other examples of this type of bar I did find myself instinctively wanting to reach for the non existent drops on a couple of occasions. Ditto the levers – once you get used to them not changing up or down. As we've got the bars set up you can't really ride on the hoods – although you could if the bars was flipped up and back a bit. We'll let you know…

Those 26in wheels are Kinetix track hubs laced up to Kinetix rims and finished off with a set of Continental Sport Contact slicks – a tyre that is also finding favour in the current Ridgeback range too. There's a massive amount of tyre clearance on offer – no surprise given the large dollop of mountain bike DNA in the Cadenza Solo (the standard issue Cadenza is in fact a folding rigid MTB). The frame will take a 2in tyre if needs be.

Fold is fairly straightforward just a couple of twists of two Allen bolts – it's certainly doable in the claimed 30 seconds. The folded package is smaller than you might think and rests on the stand attached to the bottom bracket. Unfolding it is just as quick and when the Cadenza is back together the close tolerances of Dahon's Lockjaw hinge means it all feels very stiff – it's quite hard to spot the actual join.