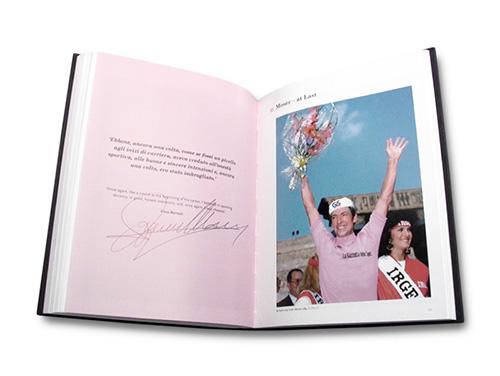 Herbie Sykes' work on Italy's Grand Tour signed by some of its most famous stars...
by Simon_MacMichael

Rouleur has released a special limited edition of its latest book, Maglia Rosa – Triumph and tragedy at the Giro d’Italia by Herbie Sykes featuring the autographs of a number of great riders to have sported the coveted jersey.

If you want to get your hands on a copy, you’d better be quick though – according to a message Rouleur posted on Twitter a short while back, half of the edition of 140 books has already been sold, with the remainder expected to be snapped up today.

The publishers say that the author spent five days travelling 2,400km around Italy to gather the signatures of the 14 legends of La Corsa Rosa who are featured in the book, the list comprising many of the great names of Italian cycling of the post-war era, namely:

The book itself, with more than 100 illustrations, charts the history of the race from its first edition in 1909.

While the big stars such as Coppi, Bartali, Merckx and Pantani are of course featured, less heralded names who have also in some way contributed to the Giro’s legend are also included, many relating their tales in English for the first time.

The special edition of the 312-page book costs £140 and is presented in a special cover and slipcase and comes complete with a limited edition print of a Giro legend and special message from Herbie Sykes.

The standard version costs £29, and both can be ordered here.