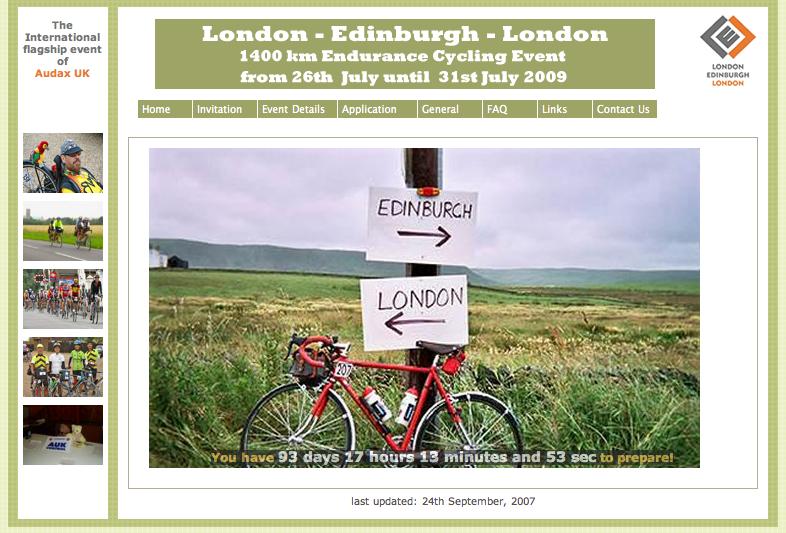 Riders from around the world will gather in London at the end of July to tackle the awesome 1400km London-Edinburgh-London (LEL) endurance. The LEL, organised by Audax UK, is not a race but it is the longest and probably the toughest ride taking place in Britain this year.

LEL takes place from the 26-31 July. Twelve controls, several hundred volunteers and a very large amount of food go in to making the LEL Audax UK's flagship event. It's the volunteers that make the big difference though and that's where you come in, if you would like to help keep this show on its particularly long road the organisers would like to hear from you. If you do want to help out all expenses are paid and the organiser's contact details are at the bottom of this story.

The ride itself is unsupported and the riders can navigate their own routes between the 12 controls. The control stations provide food, shelter and a place to rest.

The nature of the ride means that helpers will be needed all along the route which will take riders from the outskirts of London, through the Cotswolds, out across the Lincolnshire fens and the Vale of York, up and over the Pennines taking in the cobbles of Alston, England's highest market town, past Hadrian's wall, through the southern uplands of Scotland to Edinburgh… and back again.

This is the sixth edition of the ride, and the field has grown from an original 26 riders, to the 600 cyclists from 31 countries taking part this year. London-Edinburgh-London (LEL) is the longest regularly run event of its kind in the LRM (Les Randonneurs Mondiaux) calendar, it is 200km longer than the legendary Paris-Brest-Paris randonee and second only to it in the number of riders taking part.

Uniquely for such an ultra-distance event you don't need to ride a pre-qualifying distance to enter the LEL, to get in to Paris-Brest-Paris you have to complete a Super Randonneur series of audax rides (200km, 300km, 400km and 600km) in one season. That said the suggested training schedule for LEL amounts to significantly more than a super randonneur anyway:

Presumably you warm down in August with 600km and 200km rides to keep your legs from getting stiff.

To volunteer to help out on this year's London-Edinburgh-London email:  lel [at] luxton.f9.co.uk or call Melita Luxton on 0113 262 2328. To find out more about the event itself visit the very informative London Edinburgh London website at www.londonedinburghlondon.co.uk