Vuelta Stage 11 reaction: Wiggins says plan was always for him, not Froome, to take race lead

Bradley Wiggins was this evening unrepentant after taking the Vuelta leader’s jersey from team mate Chris Froome on Stage 11 of the Vuelta a Espana this afternoon and insists he is in a position from which he can win the race.

The British champion, who had started the day third overall, attracted criticism from some fans on websites such as Twitter who alleged that Wiggins and, by implication, Team Sky, had failed to respect the race leader’s jersey with Froome reverting to his role as domestique today.

The Kenyan, who became the surprise race leader after finishing second to HTC-Highroad’s Tony Martin on Monday’s individual time trial, helped tow Wiggins up the early part of today’s final climb to the summit finish at the Alto de Manzaneda ski station in Galicia. 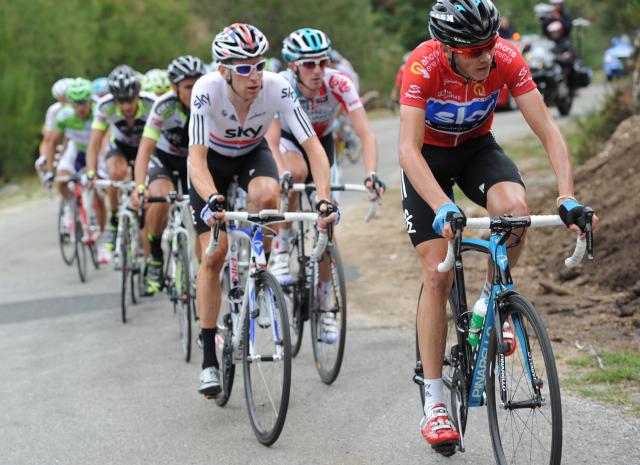 While Cofidis rider David Moncoutié was soloing his way to victory up ahead, the GC group burst into life around 3 kilometres from the finish when Garmin –Cervelo’s Dan Martin went on the attack, immediately followed by Rabobank’s Bauke Mollema, who represented a greater threat to the two Team Sky riders in the overall standings.

Neither Froome nor the man who had occupied second place this morning, Leopard Trek’s Jakob Fuglsang, was able to follow that attack, but Wiggins could, and this evening finds himself leading the race by 7 seconds from Froome. “This is a fantastic feeling to be leading the Vuelta,” Wiggins said afterwards. “I just enjoyed today, I’m pleased. I’ve been very consistent in the last few days, I’ve been very strong in the last two mountain stages and the time trial.”

The Team Sky rider, who last month crashed out of the Tour de France with a broken collarbone, an event that led to his decision to ride the Vuelta for the first time, said that his recovery was getting “better and better” but confessed:“I didn’t expect to be in this position now.”

However, he insisted that the plan had always been for him, not Froome, to target the GC and that his colleague’s temporary tenure of the race lead had not changed their team’s approach. 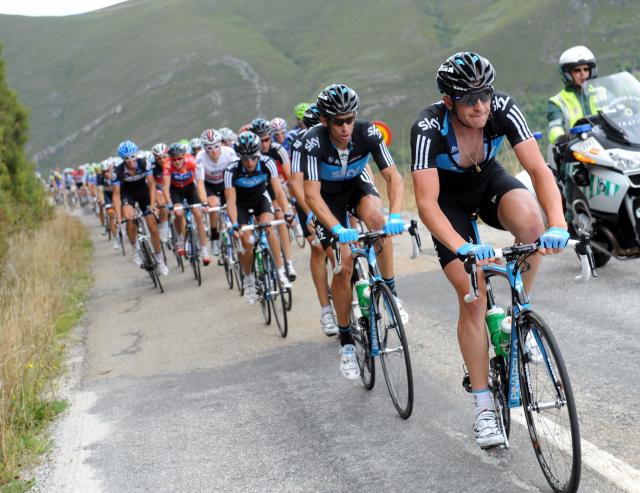 “Me to take the jersey after Chris Froome was always going to happen,” maintained Wiggins. “We’ve put the whole team on the front. Had I been fifth or sixth on GC, we would have done it the same way. We stuck to the plan after the time trial.

“Chris had a fantastic time trial,” he continued. “The red jersey for one day was a bonus for the great form he showed. I came here for GC and Chris was again fantastic for me. It was just the case of keeping the pace fast.

“When I ride at threshold in a like that suits me like this one today, not many guys can attack me, Rodríguez can and maybe Nibali,” added Wiggins.

“I was confident at the foot that everything would be ok. When I came to the Vuelta, I was hoping to finish in the top 6 and the podium was a dream but now it’s the Vuelta. There are two or three difficult finishes. The race is not finished yet. I’ll try 100% to hang on everyday.”

For his part, Froome insisted he had no regrets about the way today’s events had turned out, saying : ”Bradley to lead the Vuelta after myself is fantastic! He’s showed once again how strong he is. I’m really happy with how things went today. It’s been a phenomenal experience for me being in the jersey. I have no complaint.”

Stage winner Moncoutié, who is chasing a fourth successive mountains classification victory in the Vuelta, had been involved in the day’s breakaway which at one point had grown to 19 riders, including Benat Intxausti of Movistar, who finished second, and Rabobank's Luis Leon Sanchez, who came third. 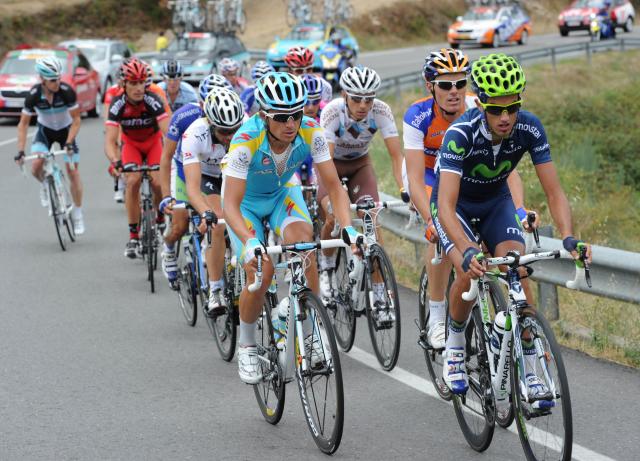 Moncoutié’s move that would eventually bring him the stage win came in response to an attack from Sergio Paulinho of RadioShack with around 13 kilometres left to ride.

When the Frenchman attacked a kilometre later, the Portugeuse rider had no response, and the Cofidis man would eventually win the stage by more than a minute. He now trails the new mountains classification leader, Matteo Montaguti of AG2R who was also in today’s break, by just one point. 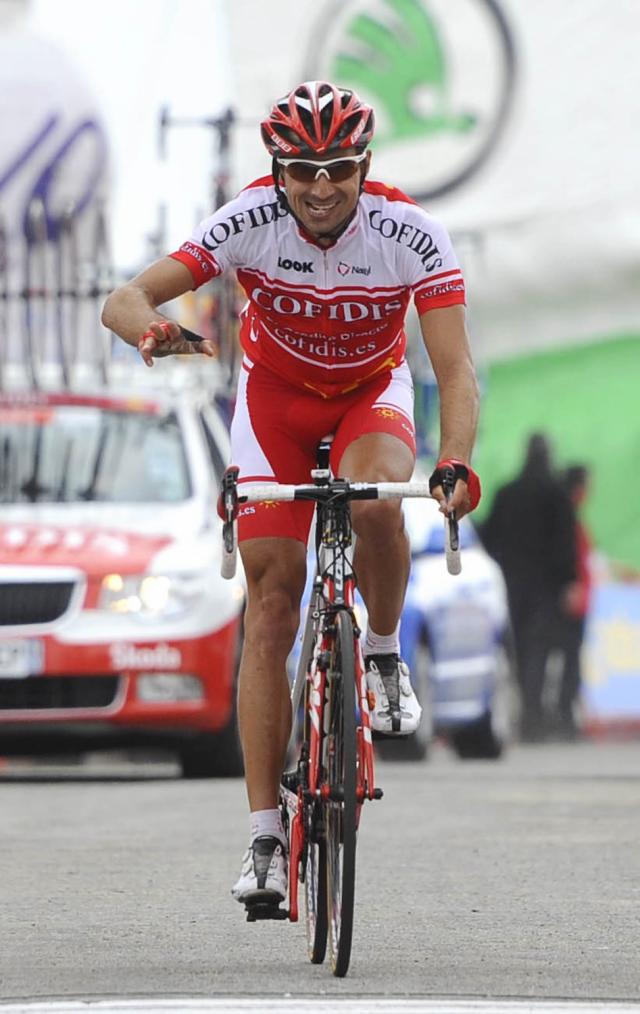 Katusha’s Joaquin Rodriguez, whose two stage wins last week helped put him into the leader’s jersey before a disastrous climb of La Covatilla on Sunday, went on the attack very late on in today’s stage but was only able to recover limited time on his rivals.

“I’ve gained only seven seconds but it’s better than nothing,” the Katusha rider, who remains top of the points classification, reflected afterwards. “Our tactic consisted in having someone from our team in the front group to be a point of reference for me. 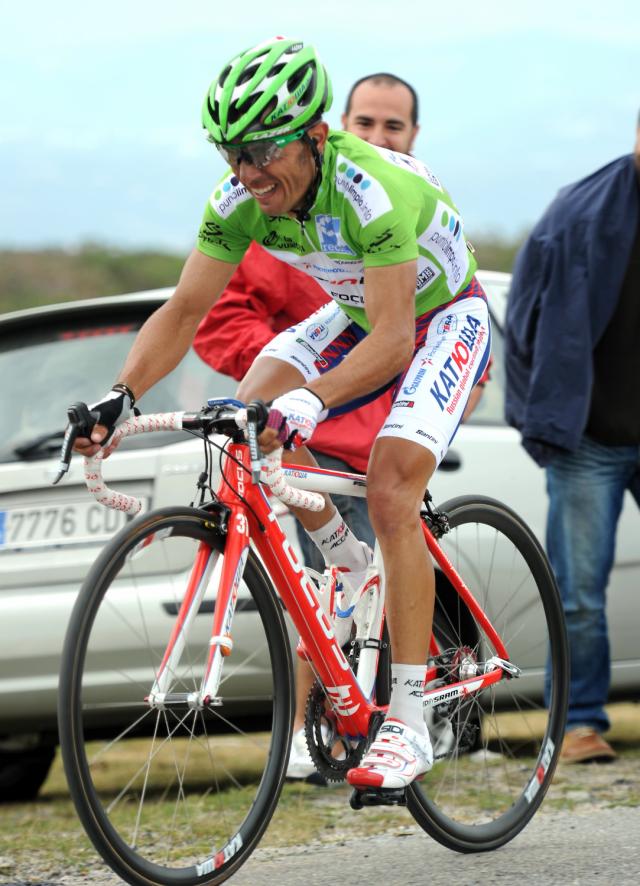 “There wasn’t much I could do until I attacked in the last kilometre,” he continued. “I thought there was space for making a bit of a difference even though it was flattish.

“Every day will be important to recover some time, Rodrigez added. “I’ve only had a bad day at La Covatilla. I feel strong. If I didn’t, I wouldn’t have tried something on a hill like today that wasn’t exactly my favourite terrain.”