by Simon MacMichael November 16 2011
8 Comments
World champ gives thoughts on issues such as advantage of a track background, and listening to music while you ride

Mark Cavendish’s quest to win the first gold medal of the London 2012 Olympic Games in the road race on Saturday starts next week when he starts his training for the coming season.

Speaking at yesterday’s launch of the Right To Play 2012 Bike Ride at the Specialized Concept Store in London’s Covent Garden, the world champion fielded questions on a wide range of topics in a question and answer session compered by the BBC presenter, John Inverdale.

“Next week I start with a 40-hour week,” explains Cavendish. “Obviously in the season, the Tour de France we’re spending five, six hours a day, racing’s different. It’s like any job, instead of sitting at a desk or something, I’m riding my bike.

Asked by Inverdale whether, in the depths of November and alone on the road on his bike, he listened to music while out training, Cavendish gives an unequivocal safety message: “Don’t cycle with an iPod in, it’s dangerous!”

He continues: “To be honest I don’t train with music. A lot of the time I’m just out and about with other pros or out with friends, even club riders, it’s just the banter, the good craic out with people, we stop for coffee, stop for tea and scones, whatever.

“But when I go out on my own, I’m a deep thinker, so six, seven hours can go quite quickly sometimes. Obviously, when you’ve got your mind on something, when you’ve got a target, it’s quite easy to stay focused. Revealing that he is a recent convert to cycling, having been forced to give up running as a result of knee problems, Inverdale confesses that he finds descents particularly daunting.

He asks Cavendish, the man who was wearing the Giro d’Italia leader’s jersey on the day last May when Wouter Weylandt died after a crash on a descent, whether pros could let any fear cross their mind when shooting downhill, or whether they just go for it.

Cavendish’s explanation is one that he’s previously given in the film Chasing Legends. “Anyone who’s a cyclist, a motor racer, whatever, I’ve talked about it before, you’ve got something in your head, a little thing that says to you, ‘You’re going too quickly round this corner, there’s a consequence,’ – we don’t have that.

“It’s all calculated,” he continues. “I know the limit I can go round a corner, it’s more I don’t have to think about it now.”

Smiling, he adds: “I wish I could know the limit of how much I can use my mouth sometimes… that’s stuff I’ve got to learn!” 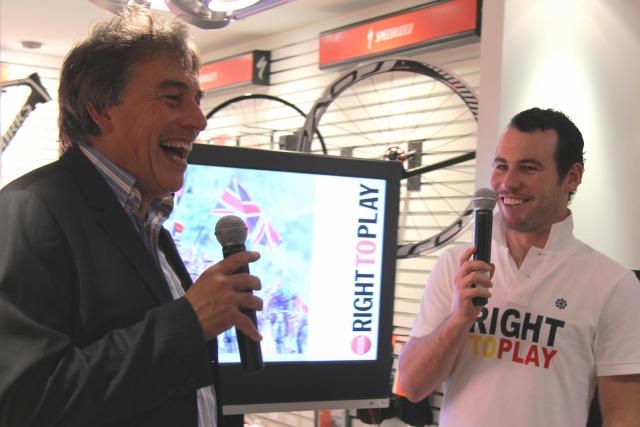 As his victory in the world championships in Copenhagen in September proved, Cavendish is able to find the narrowest gaps to ensure he gets to the front of the race and contest the sprint even when his rivals have managed to disrupt his leadout.

He attributes those bike handling skills to his background as a track racer, which he says gives him an advantage over fellow professionals from countries where the emphasis early on is on road racing.

“I grew up in the velodrome, racing on the track, you learn a lot of skills there, getting through little gaps, turning your bike, steering your bike,” he explains.

“Now a lot of races on the continent, when you’re an amateur, they all finish at the top of a hill. So the race pretty much goes easy – it can be a 200k race that finishes with a 20k climb – so you may as well have the 20k climb, because the rest you don’t really race, you get the bottom of the climb and they all go hell for leather.

“You don’t need the technical nous there, you just go hard. These guys get pro contracts because they do that, they haven’t really learnt how to race bikes. When you come from a track background or whatever, it’s instilled in you how to race.

“Obviously I can’t go uphill very fast, so I might have to win races other ways, and that’s going to be the ones that aren’t on the hills.” With the floor thrown open to questions from an audience including many supporters of Right To Play, Cavendish’s first task is to dispel the myth that he could take it easy for the entire race before coming to the front in the closing few hundred metres.

“It’s a misconception that my businesses is right at the end of the race,” he insists. “I like to be in the best condition I can be to be in the sprint there.

“It’s not like I’m hanging on to someone the whole way and I sprint at the end, I have to be there and I have to be in the best condition. And that’s about looking after yourself, making sure you’re not using extra energy by riding in the wind, make sure you’re in someone’s slipstream. 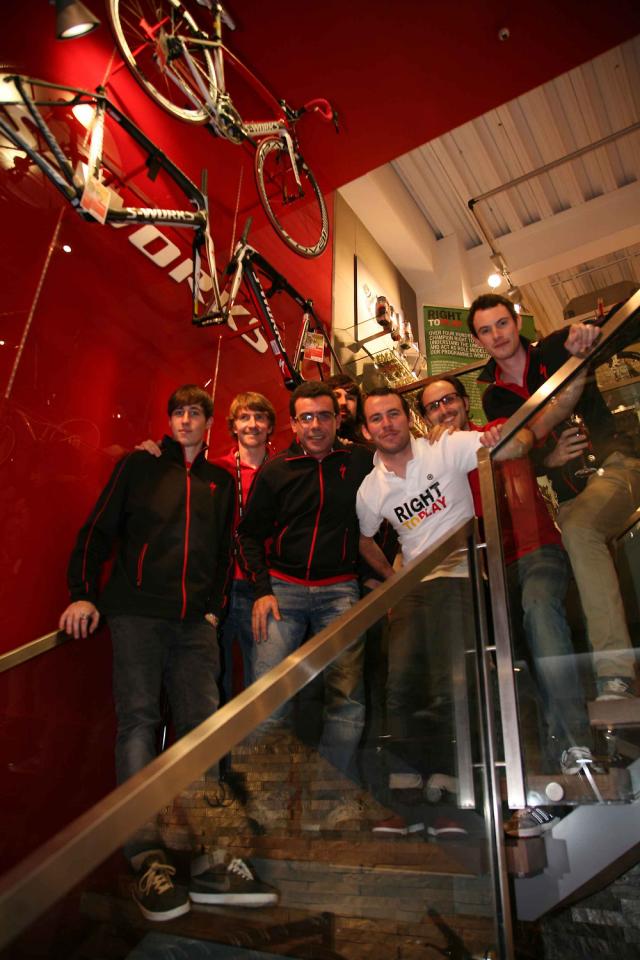 While it’s his name that appears next to the result, Cavendish, whose first comment after winning a race is always to tank his team mates, is adamant that cycling is every bit as much of a team game as football, say, with everyone working towards a common goal, irrespective of who actually crosses the line first.

“We’re riding for a team. That’s it. It’s like any team sport. It’s just like footballers are playing for a team, a striker scores, but everyone is trying to assist them.

“In our job, everybody’s paid. If you break it down, any professional sport is about commercialisation, the sponsor pays money to have their image displayed. Our job as cyclists is to get the sponsor’s logo displayed. And there’s no better way to do that than to cross the finish line with your hands in the air.

“So our job as a collective group of say nine people in the Tour de France, is to get our sponsor’s logo displayed in the best way possible. So we have to find the best way as a group of nine to do that.

“Okay, the result will say it but at the end of the day we’re paid for that job. All the guys I’m racing with, they know that I see it like that, whereas there’s other guys who don’t see it, and that’s why their teams don’t work so effectively.”

Cavendish’s awareness of the need to highlight his team’s sponsors perhaps manifested itself most clearly when, shortly after HTC had become headline sponsor of High Road, he mimicked making a phone call while pointing at the sponsor’s name on his jersey as he crossed the line to win a Tour de France stage. Similarly, when asked what he will miss most following his move from HTC-Highroad to Team Sky, Cavendish’s immediate thought is for the company providing the venue for the evening, the one which supplied the bike he rode to win the rainbow jersey.

“I’ll miss Specialized bikes,” he says, before a reflective pause.

“I’m going to miss some great people, actually. I’m lucky I spent five years with my current team and I’ve been with some great staff, some great riders.

“I’m going to miss a lot of them but also on the same note I’m looking forward to working with everyone else, with some people I grew up with, riders who are friends and management that I’ve worked with since I’m a kid.

“Like anything it’s a new challenge and you’ve got to look at how it is. I’m super excited and it’s going to be a really, really great challenge I think.”

Asked whether he had a boyhood hero, Cavendish pauses before naming what may, for some, be a surprising choice.

“There’s one rider who, you know when you’re young and you imitate someone, there’s one person I tried to ride like and that’s Johann Museeuw. By coincidence, his son’s a big fan of mine now and when Johan told me, I was like ‘wow!’ It’s nice, he’s a good man. He’s a humble guy, he’s just a bike rider, he lives for his bike like I do, we get on quite well actually."

While Cavendish doesn’t see another opportunity for him to win the world road race championship until at least 2015 due to the courses likely to feature in the coming years, there is another big prize in his sights, next summer’s Olympic road race through the streets of London and into the Surrey Hills.

He maintains that he’ll try to avoid getting swept up in the pre-Olympic fever, however, as London prepares to host the Games for the first time since 1948.

“It’s hard to know… it does sound so unflamboyant, but it’s a job that I have to do. I’ve set a target, which is to win the Olympics, and there’s a massive chance for me to win it, probably a better chance than anyone else that’s there to win. So I have to do what I can to go and win that. It’s as simple and fundamental as that.” One audience member who himself tackles Box Hill on a regular basis asks how much of a challenge that ascent will provide next July. “It’s THE challenge, to be honest,” replies Cavendish.

“We did the Olympic Test Event in August which went up Box Hill twice” – adding modestly, for the benefit of those who don’t follow the sport, “I won, you know.”

He continues: “Box Hill twice is nothing, especially with a 40 kilometre ride back into the Mall,” he continues.

“Five times, it’s going to start feeling like a climb, but nine times, it’s a lot. “But it’s really doable,” he asserts. “It’s going to be hard, but that makes it even more worthwhile if we win.

“It’s not really the severity of Box Hill, it’s nine times up it. In terms of professional cycling, it’s not too much of a climb, it wouldn’t be categorised in the Tour de France. But nine times up it, makes it pretty hard.”

When Inverdale points out that the Olympic road race route passes by his house, he wonders whether Cavendish might give him a wave as he go past as he watches from his garden.

The world champion flashes a winning smile, before suggesting that he might help the sports presenter water his garden, giving it what might euphemistically be described as the Paula Radcliffe treatment.

The room dissolves in laughter.

With one prize up still up for grabs in 2011 – BBC Sports Personality of The Year – you feel that Cavendish, one moment thoughtful and reflective, the next moment speaking straight from his heart, has already won the vote of everyone present.