We headed up to the Planet X HQ in Rotherham over the weekend to check out the new models and hit the local roads with an 80-strong group that included Planet X bike owners, sponsored athletes and Ag2r’s Nicolas Roche who was there promoting his book, Inside the Peloton.

As well as the N2A, Planet X have updated their Exocet time trial bike – it’s now the Exocet II – they have a new cyclocross bike that’s already available, and they’re working on a road bike project with high-end Italian framebuilders Sarto.

First, the N2A… The N bit refers to Nanolite which is Planet X’s existing performance-orientated carbon road bike, although the N2A is a very different beast. The 2 is because this is the second generation, and the A – which hasn’t been added to the logo yet – stands for aerodynamic.

Planet X have been working on the bike for several months. It’s not a frame out of a Taiwanese bike catalogue with a Planet X logo slapped on the down tube. Rather, the design is from Italian framebuilder and bike designer Roberto Billato with input from Planet X's Frank Campbell and Brant Richards. 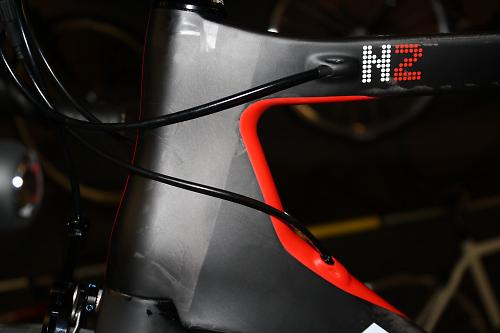 The N2A is made from high-modulus carbon fibre with a hugely oversized head tube; there’s a whole lot of depth up front, designed to manage the airflow and reduce drag. The gear cables and the rear brake cable are all internal and the entry and exit ports are very neatly done. 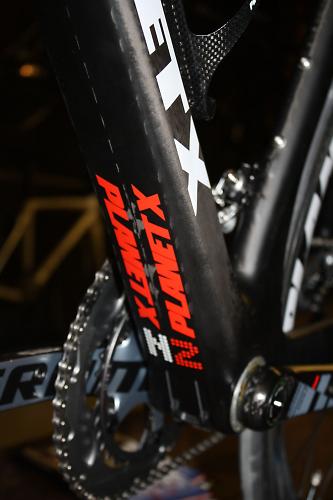 We couldn’t say the down tube looks aero, presenting a broad, flat leading edge to the wind – although if there’s one thing we know about aerodynamics it’s that looks have very little to do with it. 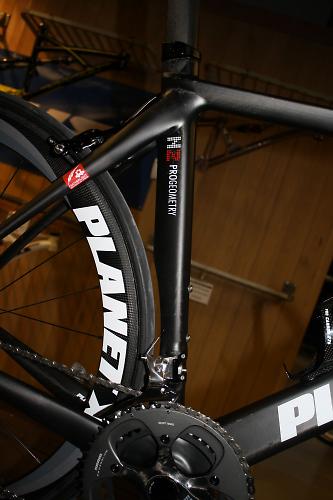 The trailing edge of the seat tube is cut away down towards the bottom bracket in time trial style to shelter the rear wheel. It looks vaguely similar to that of aero road bikes from the likes of Cervélo and Felt. The seatpost comes with an aero profile and the seatstays are skinny too. The same goes for the fork legs which are bladed to keep the frontal area low. Aside from aerodynamics, the key feature that Planet X have gone for here is stiffness. That head tube is tapered (1 1/8in at the top, 1 1/2in at the bottom) for increased rigidity and the bottom bracket uses the oversized BB30 standard. These features have become pretty much the default for high-performance bikes now (although there are, of course, certain exceptions).

In terms of geometry, the N2A is the same as the existing Nanolight. It puts you into a low, aggressive position that suits its intended use… riding fast. You’re looking at a sub 1,000g frame weight. The N2A has only just arrived in the country. In fact, Planet X’s Brant Richards spent Saturday morning chasing the delivery guys to get hold of the two initial samples for Sunday’s ride. Company head honch Dave Loughran rode one, road.cc rode the other for 60-odd miles around Yorkshire and Nottinghamshire. Ours was built up with a SRAM Red groupset.

So how did we find the N2A? Stiff. Really stiff. This is one of the most rigid bikes I’ve ridden… and I’ve ridden a lot of bikes.

Most of the time our ride group was pretty well behaved, tapping out the miles in the fog. But occasionally, someone would make a bid for glory and go off the front; boys will be boys – you know how it is. Get out of the saddle and put the hammer down to chase and there’s virtually zero movement at the bottom bracket. I was only on the N2A for three-and-a-bit hours, admittedly, but that BB was remarkably solid. It’s the same deal at the front end. Swing those bars about and there’s next to no flex through the fork and head tube; none of that mushiness you can get when you sling your weight over the front and get all punchy. And we would never use a tired old cliché like ‘this bike corners like it’s on rails’ but if we did go in for that type of thing, that’s what we’d say. It’s accurate, there’s no doubt about that.

So, stiff is the overwhelming ride feel. Does that mean the N2A is uncomfortable? Well, I was riding on unfamiliar roads using a saddle I’d never used before, so it’s pretty hard to judge comfort with any degree of certainty, but I feel confident saying that you aren’t isolated from the road surface like you are on some bikes. If you want a plush-feeling bike for relaxed all-day rides, this isn’t the frame for you. This is a bike that maximizes efficiency. It doesn’t skitter and scare you on rough Tarmac, but I’d want to fit a saddle with a bit of give in the shell for longer rides. You get the picture.

What about the aerodynamics? I simply don’t know. Judging that is hard enough at the best of times but in a big group on roads I’ve never ridden before… no chance. 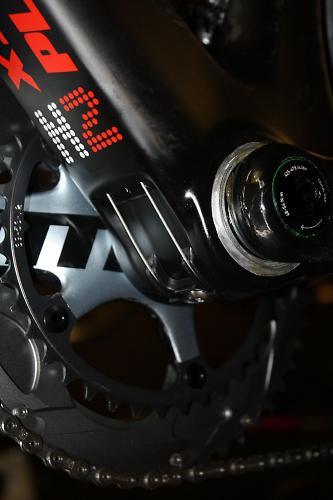 I stopped for a, um, nature break at one stage and spent a few minutes chasing to get back on the group and the bike felt quick, but that’s hardly wind tunnel testing! That was fun in the fog, I can tell you. I was reduced to following tyre tracks on the damp road to tell which way everyone had gone. Anyway, there are way too many variables to make a meaningful comment on the aerodynamics, so I won’t. 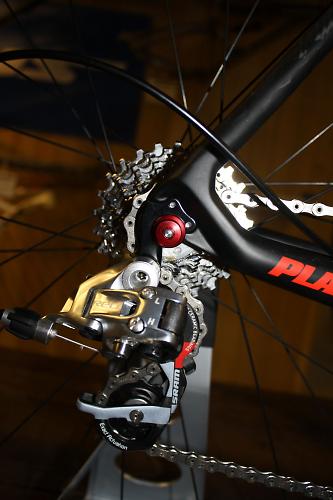 What I can tell you is that I enjoyed riding the N2A. It’s an exciting bike. I like a bike that responds quick, steers fast and accurately, and can hang out with the fast boys in a sprint. I like to get the maximum speed for my effort and I get arsey if I think I’m being short changed. If you’re similar, this bike is worth a good look.

The N2A will be available from the end of January with a couple of minor tweaks from our model. The design is pretty much there, though. You’re looking at £2,700 for a full SRAM Red build with Planet X’s R50 Carbon wheels. They’ll likely have builds from around £1,500 although that has yet to be finalized, and the frame, fork and seatpost will cost around £700-£800. 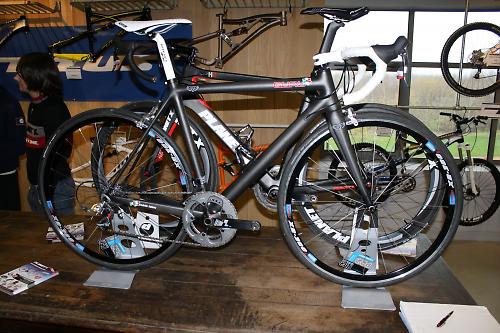 The Project Sarto bike is another interesting one. It’s a tube-to-tube carbon frame that’ll be available off-the-peg or as a custom build. The reason it’s still called Project Sarto is that Planet X haven’t decided on the branding yet. It might be billed up as a Planet X bike, or as a Sarto bike, or both… Who knows? 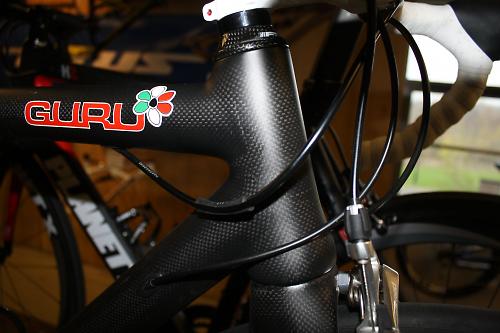 Sarto is a high-end brand based in Treviso, Italy – and all the frame production is done on site. They make their frames from carbon tubes that are mitred together, then wrapped in carbon and baked under pressure. It’s a very similar method to that used by Viner so check out our story on the Viner build process if you want a general idea of how it’s done. Planet X’s link with Sarto is through their sponsorship of the Italian Team Guru, and it’s the Guru team manager, Luciano Galleschi who designed the frame. It comes with a tapered head tube, BB30 bottom bracket, square-section chainstays and skinny, flattened seatstays. The cabling is internal and the workmanship is beautiful throughout. 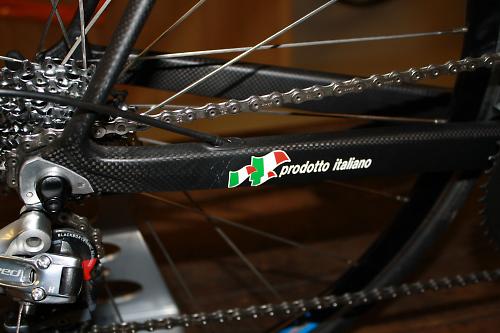 This is the version four prototype of the frame which isn’t quite how the finished model will be but it’s not far off, according to Planet X. The production model will have deeper chainstays, for example, and it’ll weigh in at around 800g. 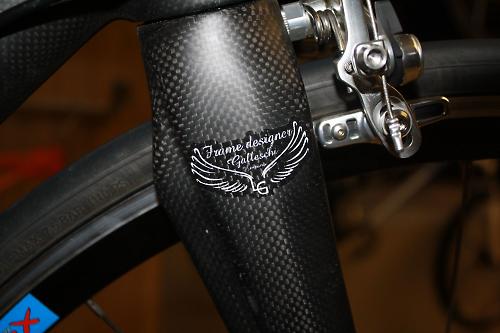 Planet X intend to produce a limited number in standard, set geometries that will retail at around £1,300-£1,400 for the frameset. They’ll also offer a custom option that they reckon will still be well under £2,000. Turn around on a custom frame should be around three weeks and Planet X are hoping to get everything up and running by mid-December. 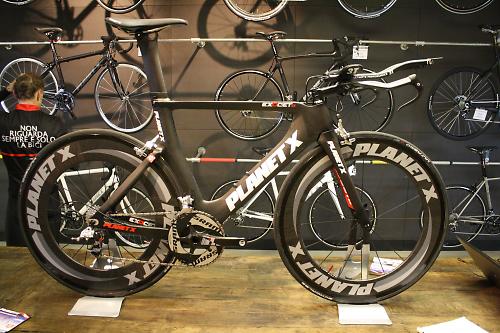 You’ll not be surprised to hear that the Exocet II is an updated version of the current Exocet time trial bike. It’s recognizably the same bike but now the cabling enters the frame at the front of the top tube/top of the head tube, just behind the stem, rather than on the sides of the down tube. 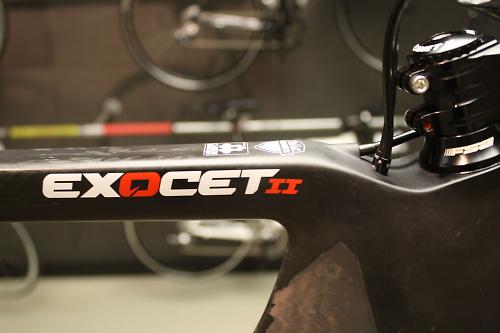 Other modifications include a cleaner design around the bottom bracket and a seat post clamp that’s recessed into the seat tube rather than sitting right at the top of it. 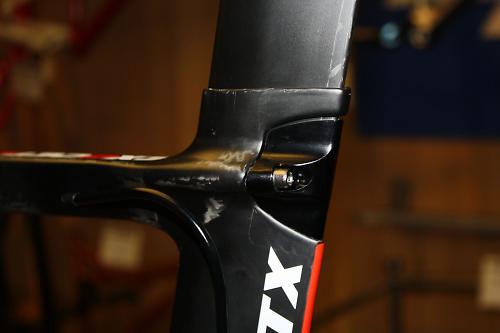 The Exocet II should be available by the end of January with a frameset costing around £700-£750. Built up options will be available too. Finally, the On-One Dirty Disco carbon cyclocross bikes have just gone on sale – On-One being Planet X’s sister brand. They’re disc brake compatible with the gear cables running along the upper side of the top tube where they’re out of the way when you shoulder the bike. 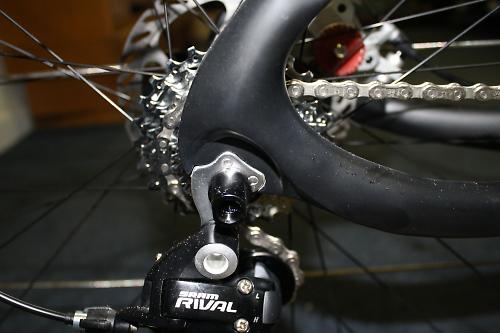 This commuter-friendly flat bar version comes in at £999. Drop bar models are available too, of course, with a SRAM Rival-equipped model priced at £1,499, or you can buy the frame and fork for £599.

For more info on the whole range go to www.planet-x-bikes.co.uk.