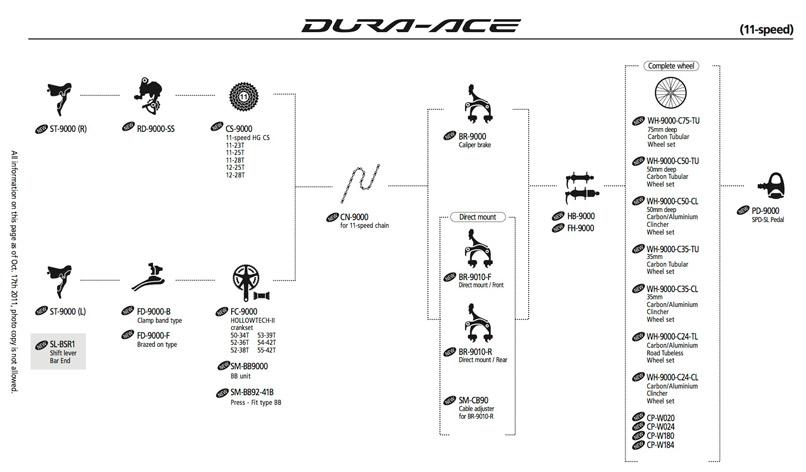 There's been plenty of rumours flying around about where Shimano will be going with their groupsets, only last month we were talking about 11-speed Di2 and hydraulic brifters* and today a parts list has surfaced on twitter via @mvogt46 and The Inner Ring that appears to show a full spec for a new 11-speed system, Dura Ace 9000. And now thanks to the folks at Velorunner there's a schematic too, pictured above.

If it's genuine, then what does it tell us? Well, for a start they've skipped 8000 and gone straight to 9000, suggesting that maybe 8000 was in development but got binned. It's eleven speeds to hit parity with Campag's top-line offerings. It's double chainset only, with a very wide selection of chainset options. The standard 53/39 and 50/34 options are slated to come first, but there's also 52/36 and 52/38 options to arrive later, and the dinner plate stash at Shimano HQ looks likely to be raided to provide 54/42 and 55/42 options as for TTing.

At the back the rear mech looks like it'll be designed to cope with a maxiumum sprocket of 28T. The schematic lists the options as 11-23, 11-25, 11-28, 12-25 and 12-28. That 11-23 is almost a straight-through TT block in 11spd, and also on the list is a bar-end shifter to work with the new system. Curiously the bar-end shifter seems to have a triple option, even though no triple chainsets are mentioned and we can't imagine that 9000 series Dura Ace would be your choice for touring...

Even curiouser are the brakes; you'll have a choice of standard dual callipers or a 'direct mount' option. We'll put our hands up and say we don't really know what that means. Talk in the office has been of a screw-in, rather than a bolt through, calliper, for mounting in difficult places on TT machines. Or possibly a mini-V affair like TRP's TT offering. The pictures of the direct mount calliper on the schematic are the same as the standard calliper. lending weight to the former theory.

The schematic also shows the wheel options. As you'd expect you get Shimano's current offerings of 24, 35, 50 and 75mm. The 24mm will be Alu/Carbon clincher or road tubeless, and the two middle wheels are available as either an Alu/Carbon clincher or a full carbon tubular. The C75s are tubular only. All of that is pretty much on a par with the range as it stands.

Do we think it's genuine? Yes, probably, although from here it's impossible to know whether it's a discussion document or a proper plan for the parts and their introduction. Given the appearance of the schematic too, it's looking more like a done deal. Assuming it is the latter you'll be hearing about it from the horse's mouth in the middle of next year, with the parts available from August onwards. Let's wait and see...