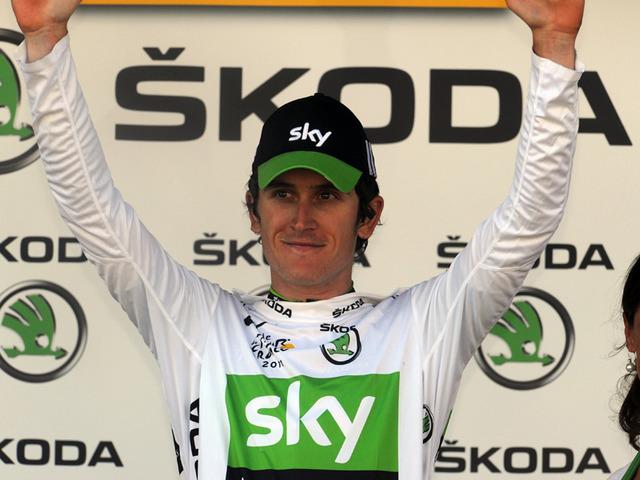 Plus, a couple of tips to help ease you back onto the bike come January
by Simon_MacMichael

Team Sky’s Geraint Thomas has been talking to road.cc about his preparations for a 2012 season in which his big target is defending the Olympic team pursuit title he helped Great Britain win in Beijing in 2008. He also has some tips to help shake off the post-Christmas cobwebs for those of us whose cycling ambitions next year might start and finish with riding a sportive or two.

Geraint was talking to road.cc last week from Team Sky’s training camp in Mallorca, which saw Mark Cavendish hook up with his new team mates or, in many cases, renew acquaintance with those he has ridden alongside either in the national colours, or at his previous High Road team in its various incarnations.

For Geraint, having the world champion in their midst can help Sky build on what was a hugely successful second season, despite Bradley Wiggins crashing out of the Tour at the end of the first week with a broken collarbone.

“I think it’s great, from the guys I’ve spoken to, everyone’s really happy to have him here,” continued the 25-year-old Welshman. “I’m sure he’s going to be up there winning stages in the big races, and that’s only going to go through the team and give everyone a boost.

“This year the Classics were pretty good then we won Bayern and the Dauphiné, you just go on a bit of a roll really. Even when you’re on different programmes, you see the guys on the Giro or whatever doing well and it rubs off onto other races.

“I think it will be a similar thing with Cav, once he starts winning races it will spread throughout the team and I think we’ll thrive on that. It will push everyone forward.”

Geraint himself features in the opening UCI WorldTour race of the season, the Tour Down Under, one of two scheduled trips to Australia, the other being for the Track World Championships in April as he juggles his early season programme between the two disciplines.

Talking of his schedule, he says: “There’s the Tour Down Under, we fly out there in the first week of January, and then come back for the World Cup in London on February” – which also doubles as the test event for the Olympic Park’s Velodrome.

“Next there’s a couple of stage races, the Tour of Sardinia and Paris-Nice, and then out to the Worlds in Melbourne,” he continues.

Geraint, whose Olympic build-up means he will miss the Tour de France in which he enjoyed spells in the best young rider’s white jersey both last year and again this July, is confident that switching between the track and the road will help him reach peak fitness ahead of the Worlds and then the Olympics.

“The workload on the road helps me get fitter, I seem to go well off that sort of work, then keep up with the track with those races so that come the Games it’s not like I’ve stepped away again.

“We had a good month on the track just now, doing the basic drills and everything, to get those working, which has been pretty good.

He adds that he doesn’t encounter problems switching back and forth between the two disciplines. “I don’t find it too hard, really, having done this block on the track recently I find it a lot easier to step onto the track from the road now that I’ve got that banked.

“It’s probably harder to go from the track back onto the road, because when it comes to a big track race the volume gets chopped down quite considerably.

‘In the run-up to the race, before the last week there’s a lot of time on the track, so you can’t afford to spend too much time on the road because you’ve got to put the effort in on the track.

“Endurance-wise, that’s probably the bit you lack when you go back onto the road.

“You’ve also got your weight as well, which can be a bit of an issue. When you cut your workload down, myself anyway, you really have to watch what you’re eating, or else you put a kilo or two on and it makes quite a big difference when you start going uphill.”

With Christmas fast approaching and the Tour Down Under less than a month away, there’s also the issue of maintaining the fitness that has been hones during the ten days in Mallorca.

“I’ll still ride my bike,” Geraint says of his plans for the festive season, which he’ll be spending with his family in Cardiff.

“On Christmas Day I’ll go out for a ride. I won’t do anything too structured and obviously it will depend on the weather, if it’s bad I’ll just go out and ride for two hours or whatever.

“But I’ll just keep riding my bike, it’s become the norm now. After this camp, we’ll have done quite a few hours here, so we’ll have three or four days to take it easy a bit and enjoy Christmas with the family, have a few late nights and sleep in a bit.

“But it’s just planning it all well and planning it around your cycling. Christmas Day you can have a few hours and really work up a big appetite. You don’t feel so bad then when you have your dinner or a little a few glasses of wine, things like that.

“So I’ll just relax and eat whatever I feel like, it’s not as if a day or two here is going to see me put too much weight on and with the track and things it’s not an issue.

“As soon as I get to Australia for the Tour Down Under, if I’ve put on half a kilo, a kilo, it will come off, so I’m pretty relaxed, just knowing I’ve got this ten-day block in me.

“And over Christmas and New Year I’ll probably get on the track at Newport, and then in January I’ll pick it up on the road and get some longer rides in before we go off to Australia.”

The weather in Mallorca, let alone Australia in the peak of an Antipodean summer, is stuff that those of us experiencing a British winter can only dream about, but Geraint has a couple of tips to help ease you back onto the bike once the New Year arrives.

“First, don’t go from nothing to 20 hours a week or whatever, that’s when you start to pick up injuries or a few niggles, it’s better to do it slowly,” he advises.

“Keep it fun and interesting as well. Meet up with some guys and make it more of a social thing, if someone’s arranged to meet you at 10 o’clock, say, it gets you out, whereas if you’re on your own you might look out of the window and say, oh well I’ll go out later, and you just end up with an hour or so left.”

Of course, stopping with your riding buddies for a coffee and Welsh cakes, if you can find them, goes without saying…