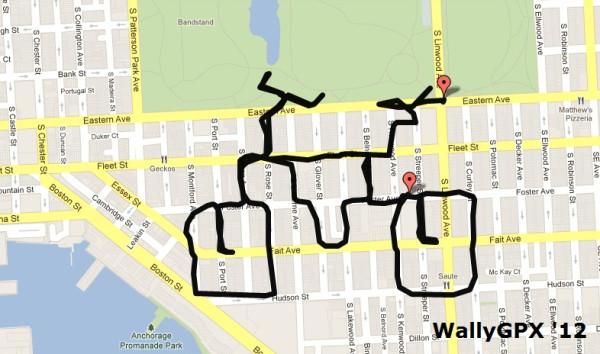 You may remember our story back in January about Michael J Wallace, the science teacher who pedals round his home city of Baltimore, Maryland tracking his rides by GPS and creating some great artwork on the way under the name WallyGPX. Well, with 2012 in full swing, he's updated his website with 20 new creations including Stick Bicycle (pictured above), one depicting the great Pelé executing a bicycle kick and, appropriately given the year, the Olympic rings.

All those and more can be found in a new 2012 Season Map Gallery on the WallyGPX website - the easiest way to navigate is to click on the main image to bring it up to full size and then scroll through the others - and that page also has links to Wallace's Ride Journals, in which he describes how he went about making each piece, plus any issues he encoutered on the day.

Those include his sightings of an alarming number of what he terms 'Baltimore flatties' - rats that have come off second-best in ecounters with traffic - with the locations of some of them making it onto the finished work, indicated by a star. A bit grittier than wandering the streets of London looking for stencilled Banksy rats, perhaps, but each to their own.

The main draw, if you'll pardon the pun, remains of course Wallace's artwork and in our earlier article you'll find comprehensive information from the teacher-turned-cyclist-turned-artist himself about how he sets about visualising the image on the map and then translating that into reality.

One new feature he's trying for the first time in 2012 is to get away from the constraints of the map's North-South axis by creating images meant to be viewed from other angles by tilting the map - the first of those, another image that ties in with the centenary year of the event, is the RMS Titanic sinking beneath the waves of the Atlantic.

We'll be checking back on WallyGPX from time to time to see what else is new as the year progresses, and we're particularly looking forward to seeing the finished version of Wallace's work, Continental Drift, the rough draft of which we showed in our previous article - a giant map of the world, the continents picked out on the streets of Baltimore.