VecchioJo has one last blast of the cyclo-cross season, or the first one of the next.
by VecchioJo

The cyclo-cross racing season may be over but the onset of warmer weather and longer days means that the possibility to ride cross bikes away from the mud and the cold just for fun is an increasingly pleasant diversion. This is where the Cyclocross Sportive comes in. The Duncton CX Sportive on 10th March was the last of the three in Southern Sportive’s cross series and based snug in the shadow of the West Sussex South Downs. So it’s going to be a lumpy one then.

Sign on, pick up the timing chip and map, have a quick cup of tea while faffing about with bikes, discussing tyres and the grey but warm and wind-free conditions as all around a variety of beasts are being shoehorned out and hoiked off the tops of cars; cyclo-cross bikes, mountainbikes of front and full suspension persuasions, and plain old ones, some Halfords specials and even the odd brave road bike all chosen to tackle the days mix of road, trail and mud.

The first wave of riders are all heading off on the long 80km route, those striking out on the 60 or 40km course options are scheduled to head off later. This staggered start means the bun-fight of some other sportives is avoided, no messy bunching up in the first few miles, no traffic-jams at the first narrow section and no pointy-elbows while things sort themselves out, just people trickling past, riding bikes. Excellent. 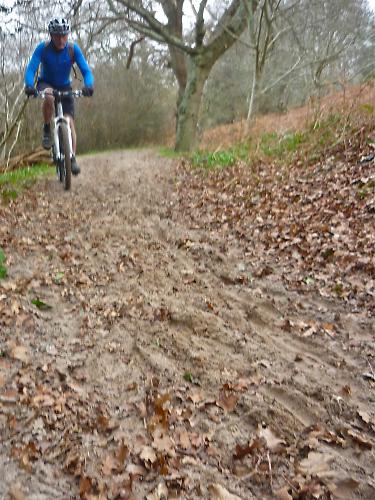 In less than 5 kms from the start, down a quiet road and along a dirt track we’re directed onto a track of rim-deep sand, no-one was expecting sand! Thanks to a little quirk of geology this area of Sussex is less of the usual chalk, flint and sticky mud and more sand and fir trees making the place seem more Scotland than the poncy south. The unexpected terrain has some people struggling whilst others giggle at the challenge and this sets the scene for the rest of the day. With the jumble of surfaces on a CX Sportive whatever bike you’re on is going to be perfect some of the time, occasionally less than ideal and once in a while vastly inappropriate, maybe frighteningly so. Velvety smooth tarmac, scruffy back lanes pocked from a tough winter, gravel tracks, dry chalk, tacky mud, grass, wet mud, black bog, roots, loamy dirt, slidey chalk, thick mud, chalk embedded with bricks, chainset deep puddles and bike swallowing ruts all pandered to the skills and punished the shortcomings of the random mix of bikes being ridden. The first real test of the day comes in at about 10km and the ascent of Bignor Hill up the harsh north face of the Downs, with 4 black arrows on the map the unkempt tarmac road probably makes up a large chunk of the days 1340m of climbing and has everyone scrabbling for gears and even forces some to scrabble up on their feet. The hard bit out the way and on the top of the Downs the following up and down and up and down on tarmac and dirt seems easy and that lovely section of singletrack that paralleled the road felt a gloriously guilty pleasure. A fast decent off the top by the racecurse to Charlton takes riders to the first feed station and the split between the short and long routes, riders on the longer route can take the opportunity to snaffle some water and food to see them on the loop that will bring back to the same point where they can stock up again for the final push. The entire route is well signed with arrows on all the major junctions and little snags of tape tied to trees to show you’re still on the right track meaning that looking at the map or GPS is reserved for the one time exuberance got the better of eyesight on a downhill. Over 80kms the riders pass through woodland, across open downland, through twee chocolate-box villages, past tiny Saxon churches and vast country houses, posh polo fields the size of entire counties and the odd totem pole. Being a little local I’m privileged to be acquainted with some of the roads and tracks in the area so know that the route takes in a lot of the Good Bits I know whilst still being able to throw up some unexpected gems, it was like being shown around the area by a good friend. Can’t praise better than that. The only fly in the ointment is a short 2.5 km section of fast A road to join the dots up, but that’s more than made up for by the preceding section of singletrack through a green carpet of bluebell shoots waiting to sprout, prompting a mental note to come back in a few weeks when the woods should be in full purpley-blue bloom. The final third of the loop starts with the long flapjack-burpy draggy climb back up to the top of the hill and a quick blat left along the South Downs Way before dropping off the north face avoiding flint and brick punctures and onto the tracks of the flatter Weald that has held onto its winter rain and is quite a shock after the preceding dry yet tacky trails, it’s quite shoe-soaking puddly. The route designers drew in an extra loop within sight of the finish just to tease tired riders and throw in one final short and steep climb made harder with thick sticky mud to completely rinse the legs of any energy they may have had left, but they swiftly follow it with the reward of a final descent on swoopy rooty slightly drifty singletrack. A free cup of tea at the finish is partnered with a well earned pasty just as the sun finally broke free of the clouds for the first “sat on the grass after an event instead of rushing off home with the car-heating on full” of the year. You could if you wanted award yourself a virtual gold, silver or bronze medal depending on how fast you made it round the course, but the cyclo-cross racing season is over, it was just a really jolly good day out.