Goodies from SRAM & Zipp, but no sign of road discs here
by Max_Leonard

Coming up we'll be talking about SRAM's new E-matic, but for those of a more orthodox persuasion, there were a good few titbits to be had on the Sram and Zipp stand.

And, in the absence of any disc brakes on show, the the new Red groupset, which was on public display for the first time, topped the bill. SRAM says the new Red has been re-thought from the bottom up; it also says that it weighs a measly 1,739g. Neither of these things were independently verifiable, since the bits were all locked in a hard-to-photograph display case, but it did all look pretty damn good.

The  company is touting its black and ‘falcon grey’ colours elsewhere (more later), but the idea is that many of its parts, including wheels and components from Zipp, will harmonise by using the same colour scheme. Most obviously on the Red this is seen on the chainring, which somewhat distances itself from the previous ‘spinning ninja chainsaw of death’ incarnation. SRAM’s top chainrings have always been more, I dunno, decorous than Record’s geometric whirls and Dura-Ace’s futuristic moulding, and the new one keeps in that tradition. On display were standard and SRM-compatible chainrings. Both were 53/39 - so no glimpse of the compact, nor of the multiple chainring options (pairing, eg, 52/36 or 50/38) that I’ve always found to be a nifty feature with Sram. No sign either of the BB30 fittings - is that because there's nothing to see - although SRAM has released pictures of the BB30 crankset? There were, however, some bar-end shifters on show, but you wouldn't want to see those, would you? Oh, you would, here you go then. 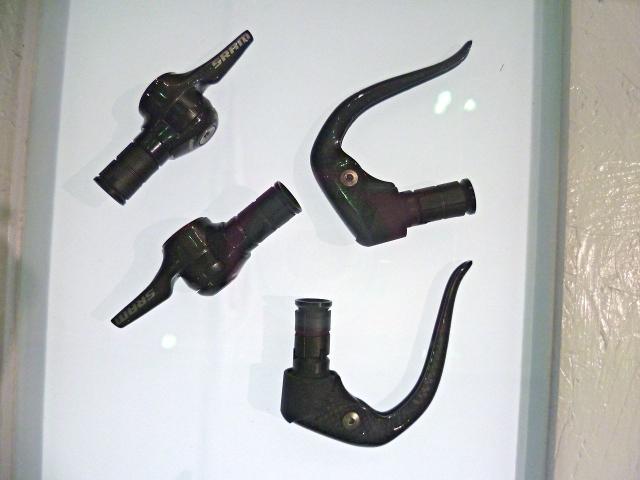 The front derailleur was very slender - the new design now ‘yaws’, or angles itself to be parallel with the chainline - and the rear derailleurs, although all curled up in little springy balls like dead beetles, looked just about the sexiest part of the kit. Moving on, the ErgoDynamic shifters were also slender, and looked nicely ergonomic. They keep the ZeroLoss technology of the previous generation (which means that as the wire moves through the lever, the same distance is moved at the derailleur - elementary, maybe, but not something that Campag or Shimano do, hence their longer, less precise lever throws), and now have reach adjustment. The callipers, meanwhile, had a rather large, flat front, which is claimed to be more aerodynamic. And the cassette. Well, aside from some graphics on the reverse, it just looked like a cassette. Sorry. 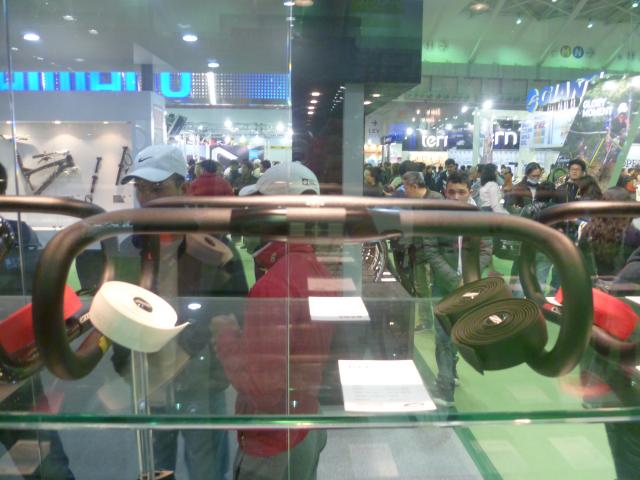 Anyway, a zip through of the rest of the booth (sorry again). As mentioned, the grey and black colours are being extended through the Zipp wheel range - and the new colours are all there is to report there. As for handlebars and stems, Zipp was reporting strong interest in its new SL Speed short-reach, shallow drop handlebars. It claims the new ‘Beyond Black’ finish (for which, read: black) uses a combination of shot peening and polishing that not only looks smart but also significantly alleviates stress and fatigue on the surface. And speaking of stress, the new SL Speed stem, which weighs in at 102g for the 100mm model, has a carbon-only body, with no embedded metal. Instead, the bolts screw in from behind, into a forged titanium faceplate, which apparently means a dramatic increase in stiffness, as the stem's construction no longer has to take account of comparatively more breaky metal bits.