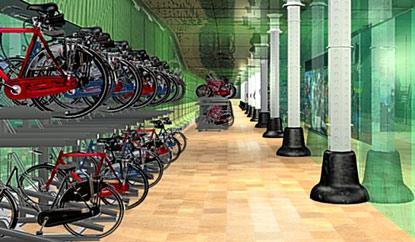 Discussions about a huge storage warehouse for bikes at London’s Paddington Station have been very ‘warm’, according to the scheme’s operator.

Dutch owned NedRailways want to install a ‘cycle warehouse’ for 1,000 bikes at Paddington at a cost of £750,000. The Cyclepoint would be Britain’s biggest station cycle park, more than double the size of the one that opened near London Bridge last month.

The glass structure would be manned until late into the evening and would include a cycle hire, sale and repair shop. A spokesman for NedRailways said it would be secure, accessible only with a swipe card, and would cost about 75p a day with discounts for season ticket holders.

Talks with Transport for London and Network Rail have met a warm reception, said a NedRailways spokesman.

A spokesman for Network Rail said: “There has been discussion about this scheme and it looks like all parties are keen to move it forward.”

A TfL spokesman added: “We are investing £3.5 million this year in new cycle parking facilities in the capital and will be installing facilities at 60 Tube stations during the next few years. We are always looking for innovative ways of providing more cycle parking.

“We believe these proposals would be an excellent addition and would be an ideal candidate for funding from the Government.”

However, this is unlikely to be the first Cyclepoint site in Britain. Plans are already underway for bike storage, rental and repair facilities to be installed at Leeds station in spring 2010.

Recently, Transport Secretary Lord Adonis said that £5 million would be available to fund imaginative cycle schemes across the UK, mainly in London.

1
Conservationists blame "anti-social" cyclists for New Forest damage
2
Bowman Cycles liquidates after "absolute clusterf**k" of supply chain issues
3
Cyclists now outnumber drivers on many A-roads, Department for Transport figures reveal
4
New cycle lane blamed as family home to be demolished for roundabout redevelopment
5
No Tour de France record for Mark Cavendish in 2022 — teammate Fabio Jakobsen says Manx Missile will race Giro d'Italia
6
Musguard updates its removable, rollable bike mudguards with increased compatibility
7
Near Miss of the Day 694: King of MGIF drivers just has to get in front at congested roundabout
8
"For all he knew I could have been dead": Cyclist searches for hit-and-run driver