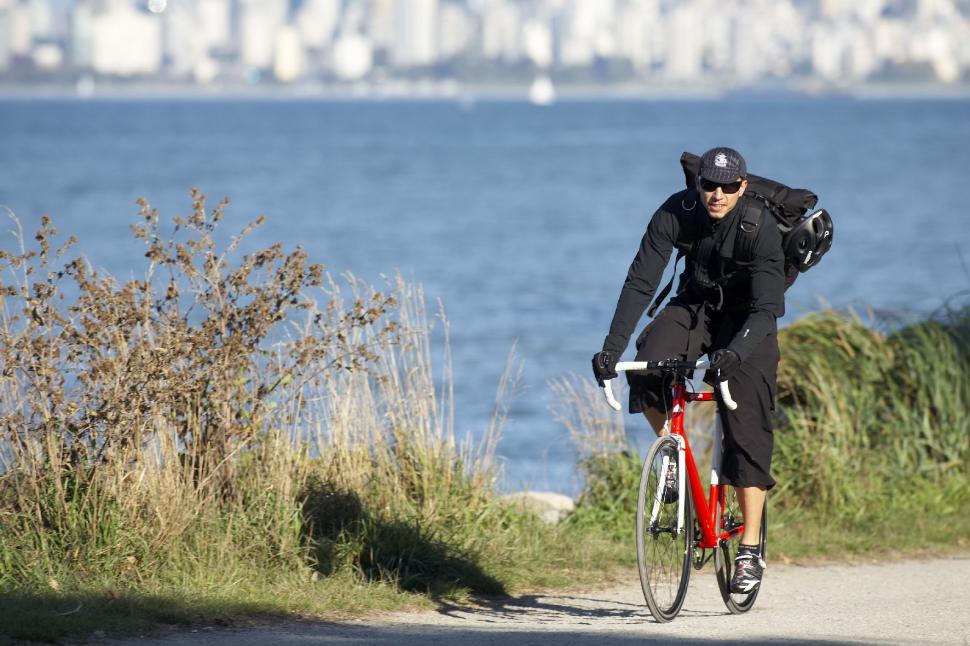 Sugoi launch H.O.V range designed to look good on and off bike

Sugoi are the latest clothing brand to try their hand at creating performance clothing for commuters that works off the bike too, this Autumn sees the launch of their Human Operated Vehicle range – designed they saying by combining “technical performance with casual city style” resulting in “a more leisurely, every-day look that easily switches from cycling trail to street café”.

Like other companies attempting to make clothing that works both on and off the bike (see also bspoke), Sugoi's interpretation of “casual city style” is to make everything black darling… well it is very slimming.

Black they may be, but you will be seen – all the garments in the range feature Scotchlite reflective highlights and detailing, so being seen on dark nights shouldn't be that much of a problem. Whether stylish urban types or LOHAS consumers as they appear to be known in the marketing world (that's Lifestyle of Health and Sustainability)* want to ride their bikes and sit in cafés looking like ninjas is the big question – well it is for Sugoi anyway.

The price shouldn't put them off both the men's and women's HOV jackets are a very reasonably priced £90 and the pants are both £65. For Spring/Summer 2010 there will be more colours and an expanded range with utility shorts and shirts being added available in Concrete  (sort of greeny, sand, brown (isn't that khaki? - ed)) the women's shirt will able be available in Magenta.

The H.O.V range comprises men's and women's jackets and pants sizing for the women's garments runs from XS-XL and for the men from S-XXL. Both jackets and pants are made from a fibre Sugoi are calling Mobil Carbon which allows for maximum stretch and 360° range of movement, the cut is also ergonomic says Sugoi to further aid ease of movement. The fabric is treated with a water repellant finish which will shed “light precipitation” so not fully waterproof, on the other hand it is also highly breathable which should make for a more comfortable and less sweaty experience on the bike – and won't have other stylish urban types moving away from you in the cafe the fabric is anti-microbial too which should also help eliminate nasty niffs.

We'll be getting some in to test but looking at the publicity shots the women's jacket would seem to be have a longer cut and a higher collar then the mens' both look more casual than normal cycling wear – whether the apparent absence of details like dropped tails is a help or a hindrance only testing will tell, it should pass the stylish urban cafe test… so long as we can find a stylish urbanite to test it.

Find out more at www.sugoi.com

* It must be fun being a C.O.P.A (creator of pointless acronyms)

1
Video: Driver calls 999 to report cyclist for not getting out of her way
2
Boss of lorry firm killed in collision involving one of his own trucks
3
Residents complain about plans to demolish house to make room for new cycle path
4
Brompton reels from impact of Brexit and Covid
5
86-year-old cyclist died while riding Land's End to John o'Groats
6
Council pulls plug on safe cycling route to help school run issues
7
Win! 5 anti-theft GPS tracking Alterlock units to be won worth £114.99 each
8
Vittoria launches run-flat Air-Liner inserts for road bikes