Italian shoemaker Gaerne is celebrating its fiftieth anniversary this year and to mark the occasion here's some very shiny, very light and very trick new shoes: the G-Chrono line-up.

Claimed weight is a not-very-heavy 275g per shoe thanks to a carbon sole and BOA L dual-reel closure. Gaerne say the BOA system also makes for a cooler shoe because you don't have gert Velcro straps over the top of the foot impeding airflow. We just like the clicky noise it makes.

While the front of your foot is being tongued, the heel is held in place by a new injection-moulded carbon anatomic heel-cup, shaped to help reduce Achilles tendon aggravation and fited with grippy liner to keep your heel in place. A reflective insert on the rear helps keep you visible.

It's all built on a thin, full carbon fibre sole with built-in ventilation channels and rubber pieces on the outside so you are slightly less likely to land on your bum while walking. There's also a new-design ultra-lightweight insole.

The G-Chrono is avalable in white, black, blue, or red and will hit the shops shortly. It'll cost under £300, according to Hotlines - not cheap but in the ballpark for high-end, Italian-made shoes. 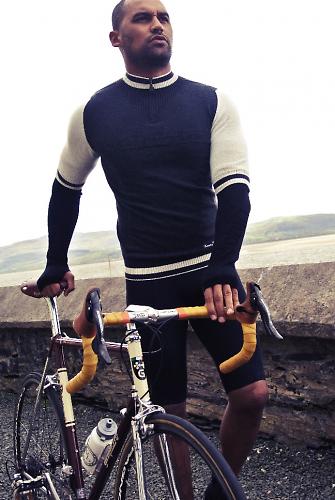 Tommy Godwin has been involved in the creation of the new jerseys and on his recommendation the Bob Maitland is grey with white short sleeves to reflect Bob’s style of wearing darker clothes, and the Tommy Godwin is beige with black short sleeves.

Both are made in the UK and are entirely seamless with a quarter zip, a rear drop back hem, rear buttoned ride pocket and are made from 100% organic extra fine, high quality Merino wool from South Africa.

The rear pocket also has a purl stitch Union flag to reflect Olympic glory and each hem has the rider’s name embroidered on it. A specially commissioned swing tag accompanies each jersey to give the wearer an overview of the riders’ palmares.

In addition to many national and international achievements, Tommy won two bronze medals at the Herne Hill Velodrome in the 1948 London Olympics and plays an active role in the ongoing campaign to help secure the site’s future. He was particularly well known for his coaching skills and bike shop on Silver Street in King’s Heath, where many future stars were introduced to cycling. He will carry the 2012 Olympic Torch through his home town and celebrates his 92nd birthday this year.

Bob Maitland, who sadly passed away in 2010, rode well into his 80s and was still winning late in to his career, which started in 1939. He won the national championship twice, set numerous distance records, rode for both Hercules and BSA as a professional and was part of the first ever British team to ride the Tour de France in 1955. In the 1948 London Olympic Games, he was the best placed British rider in the road race (coming in 6th), helping his team secure a silver medal.

Velobici’s Chris Puttnam said, “It’s a real honour to be able to name these jerseys after two of the UK’s greatest ever riders. Tommy has been so helpful, suggesting which jersey best reflects his and Bob’s own styles, and we took inspiration for the Union flag detailing from one he wore in the 1940s. He’s a fantastic guy and we are delighted he likes the finished product so much. We hope today’s road and track riders will enjoy wearing a little piece of history.” In an attempt on the prestigious record for the world's longest saddle name, the leathermeisters at Brooks have introduced a special edition of the classic B17, called (deep breath) Brooks B17 Select World Traveller 2012 Limited Edition Saddle. Phew.

The new saddle celebrates Brooks' historical associations with the sporting heroes of the 1948 London Olympiad. That's a piece of 'getting your brand associated with the Olympics' that should get under LOCOG's radar seeing as the custodians of London's 11 billion quid boondoggle haven't sold the rights to the middle of last century to MacDonalds as far as we're aware.

The 'WorldTraveller' bit of the name refers to Brooks' relationship with the inaugural WCR Grand Tour (www.worldcycleracing.com), a competitive circumnavigation of the Earth by bicycle.

The leather surface features a restyling of a piece by Frank Patterson, artist and illustrator of the Brooks catalogues of the 1920's, realized by Richard Phipps. All saddles have been made using Brooks Select organic leather tops, fixed to a chromed copper steel frame and finished with hand hammered copper rivets. The B17 Select World Traveller is available at chosen Brooks Dealers Of Excellence from May, and production of the Brooks B17 Select World Traveller has been capped at 2012 pieces. 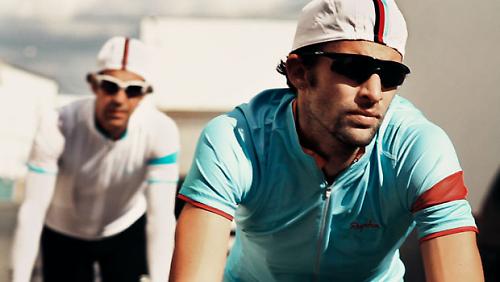 Just in time for the weather to finally turn warm and sunny, Rapha has launched the Super-Lightweight Jersey for riding and drinking coffee in very hot weather. It's made from three synthetic fabrics developed exclusively for Rapha, and the company says it's suitable for days when their Lightweight Sportwool Jersey is too heavy.

The jersey’s main fabric is designed to be comfortable against the skin even when you're sweating and to dry quickly. It's treated to stop it getting smelly and the middle rear pocket is designed to carry a water bottle.

You'll also find other standard Rapha jersey features such as set-in sleeves, a stand-up two-piece collar and a zipped valuables pocket. The patterns are all based on the St. Raphaël trade team colours of red, white and blue.

Tow it along with a Bellelli trailer from Halfords Need to carry a bit more than you can cram into panniers – or don't have any way of fitting them? Halfords has announced two new trailers, the Bellelli B-Tourist Bike Shopping Trailer and Bellelli Eco Max Bike Trailer, available from Halfords.com.

The £59.99 Eco Max trailer attaches to the seatpost and can be detached so you can use it as a hand trailer too. Its main body is made from shatterproof plastic and has a capacity of 60 litres or 35kg. Halfords says it'll take 35 bags of sugar or three full shopping bags.

With a steel frame and a multi-compartment fabric bag, the B-Tourist trailer is a rather more posh affair for popping down to Waitrose or heading out for a picnic. Capacity is 25kg. Like the Eco Max it can be towed by hand when off the bike.

Sample Sponser nutrition for a tenner 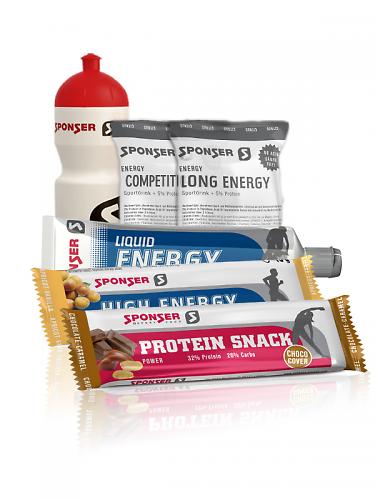 The pack includes a 750ml Sponser water bottle and try-out sized packs of:

Component maker SRAM has released three new videos offering mechanical help to folks lucky or affluent enough to have the 2012 edition of the top-end Red group (or RED as SRAM insist on rather shoutily calling it).

Aimed at owners, dealers and mechanics, the videos compare the set up details of the 2012 Red gear with the previous incarnation. “New technologies need special attention!” says SRAM's Geraldine Bergeron. And who are we to argue?

There's a few seconds of marketing wibble at the start of each one, but bear with it as the how-to is done well. Nice to see that the videos have subtitles too.

Here's the instructions for the Red Double Tap shifters:

The video for the front and rear derailleurs:

And the how-to for the brakes: Portuguese accessories manufacturer Polisport has picked up a couple of iF Design awards from the International Forum Design Hannover. Its Corky water bottle was recognised for use of organic material and the Guppy baby seat won a product design award.

The Guppy fits bicycles with and without a rack. It offers easy fixing (with tools included) and a button for quick release of the baby seat. A front fixing ‘mini’ version is available for smaller babies.