Bontrager have release details of several new products including aerodynamic road bars, a new helmet, and an extended wheel range.

We’re at a Trek launch in Belgium at the moment and we're off out for a ride on the new Trek Madone in a minute so we only have time for the briefest of details here. Check back later on for more information.

Bontrager entered the helmet market a couple of years ago with the high-end Oracle and they’ve now introduced a slightly more affordable option that shares many of the same features. 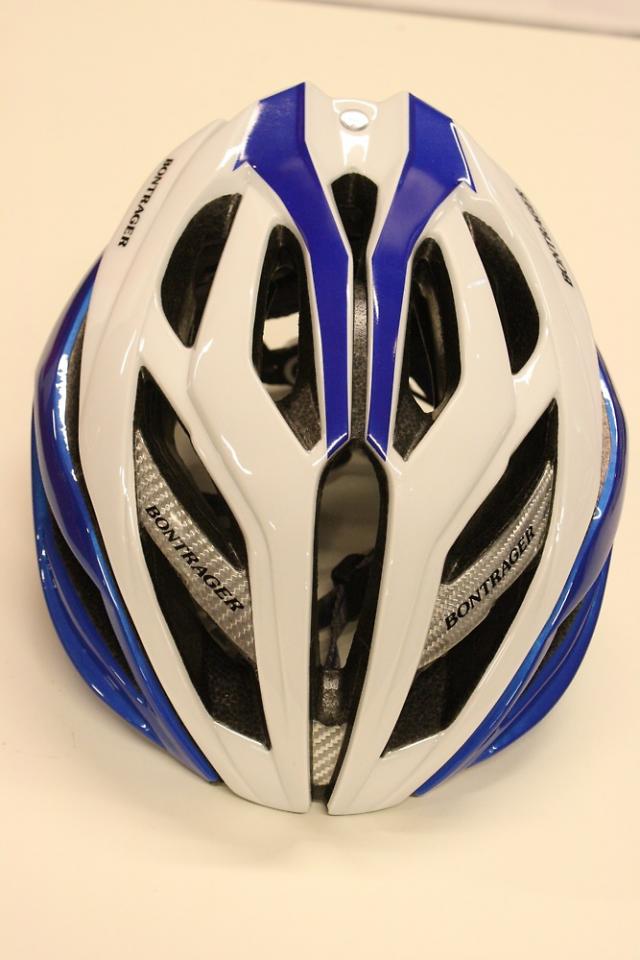 Like the Oracle, the Specter has some big vents including a large central channel at the front. The Oracles uses an in-moulded carbon fibre skeleton within the EPS foam to keep the strength high but the Specter has a front cage made of Texalium, which is an aluminiumized glass-fibre product, while the rear is composite.

The Specter is a very similar shape to the Oracle and it’s also low profile. It features AgIon padding that contains antimicrobial silver threads and the lockable sliders are simple to adjust. 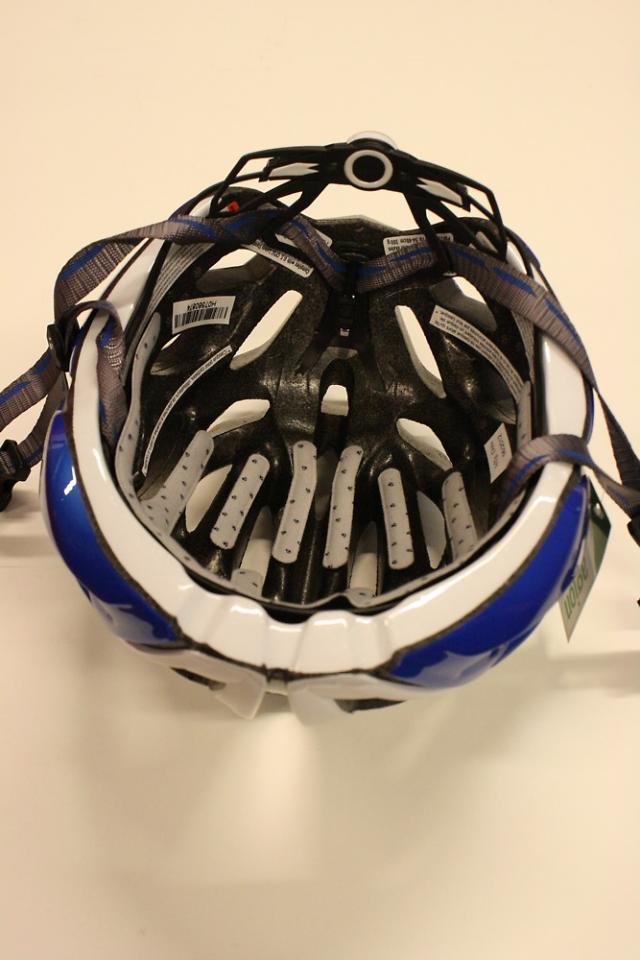 The retention device is a development of the Oracle’s Headmaster system called, reasonably enough, Headmaster II. It’s height adjustable and the circumference is one-hand adjustable via a dial at the back. The medium sized version weighs in at 300g and you’re looking at £139. Bontrager have developed a new set of aero road bars that will feature on the new Madone, and they’ll be available to buy aftermarket too.

Essentially, Bontrager have taken their KVF (Kammtail Virtual Foil) profile, as used on the frame and forks of the Trek Speed Concept and now the Trek Madone, and applied it to handlebars. The bars are drilled to take cables internally through the top section and you can bolt on aero bar extensions if you like – which you can’t do with many lightweight designs because of the possibility of a nasty failure. 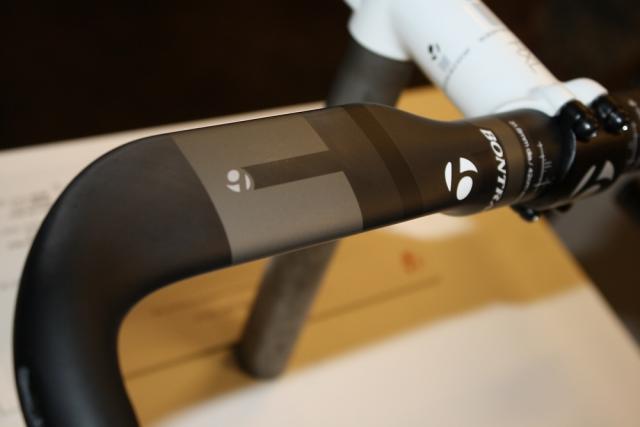 The bars meet the UCI’s 3:1 profile regulations and Bontrager claim they’ll save you 23secs per hour compared to traditional round bars – although the wind tunnel testing compared both these bars and existing ones without bar tape added.

The drops are extended backwards by 10mm and they flare out by 6° at the ends so your wrists don’t hit the tops. 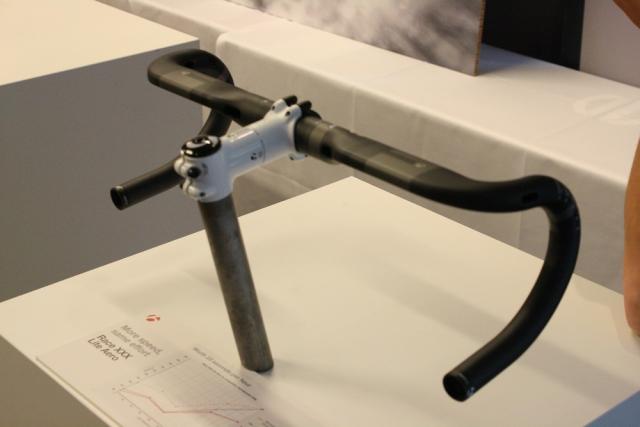 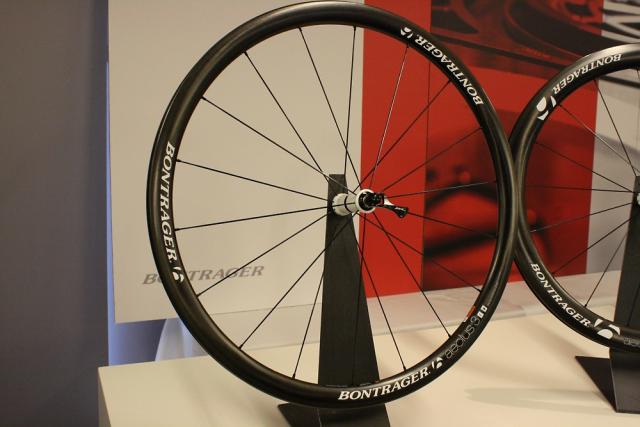 Bontrager launched their Aeolus D3 aero wheels a year ago. The 50mm-deep Aeolus 5 cincher has recently been joined by the 35mm-deep Aeolus 3 and other clinchers are coming. The 70mm Aeolus 7 will be available next month and the 90mm Aeolus 9 follows in September.

According to Bontrager’s own figures, the Aeolus 3 (£2,000) has less drag at all yaw (apparent wind) angles than the 40mm-deep Reynolds Assault and less than the 45mm Zipp 303 clinchers at low yaws, although the 303s have less drag at 10° and beyond. The Aeolus 3 weighs in at a highly reasonable 1,450g and there’s no rider weight limit. 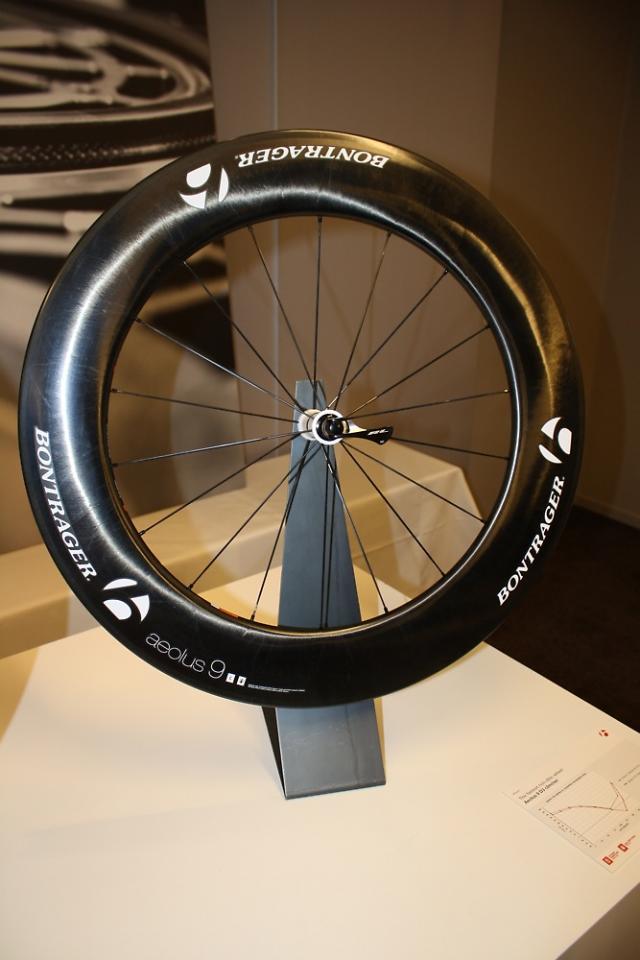 The most interesting wheel in the range is the £2,100 Aeolus 9. Bonty reckon it has less drag than the Zipp 808 at all yaw angles – although, to be fair, the 808 is a little shallower at 81mm. Anyway, the most interesting bit is that when the yaw angle is 15°, Bontrager say you get negative drag. Huh? In other words, you get thrust. It works a bit like a sail (a little bit) to help you move forward.

Although the guys at Bontrager won’t come right out and say it, they’re definitely working on disc brake versions of their wheels at the moment. What they actually said was that with brakes now being spoken about for road bikes more and more they’d be mad to ignore it as a possibility. So, they are working on them.

Another technology that’s getting transferred over from the mountain bike side of things is tubeless tyres for road bikes. Tubeless has been around for ages now and no one ever seems quite sure if it’s the way of the future or not. inner tube combo. Bontrager are into the whole tubeless thing and their alloy Race Lite (£450) and Race X Lite wheels (£750) are both tubeless ready – or ‘TLR’, if you prefer. Both those wheels are 23mm wide, the extra width providing more support for the tyre and increasing the size of the air chamber a touch for a little extra cushioning and comfort. The Bontrager guys hinted that the Aelous D3 clinchers might become tubeless ready at some stage too, although there’s no timescale on that. There aren’t too many tubeless tyres out there and those that do exist tend to be pretty expensive. Bontrager’s R2 TRL is built around a 60TPI carcass and weighs 305g and it’ll set you back £39.99. The R3 TLR is 120TPI and 270g and will cost you a tenner more. Both get Bontrager’s Hard-Case Lite belt under the tread to help avoid puncture and come in both 23 and 25 widths.

As well as using the usual argument that tubeless allows you to run lower pressures without the problem of picking up pinch flats, Bontrager reckon that the rolling resistance of their system is lower than with the usual tyre and inner tube combo.