Olympic time trial: The bikes (and the riders) that could win

Which will be the fastest bike in the race against the clock?
by David Arthur @davearthur

After the excitement of the Olympic road race last weekend, which saw Mark Cavendish's hopes for gold dashed and Lizzie Armitstead producing a silver lining with a courageous ride in the women's road race, it's time now to turn our attention to the time trial on Wednesday.

The race of truth is the ultimate challenge. There's no place to hide. It's athlete and bicycle in perfect harmony racing against the clock. In recent years, developments to produce faster time trial bikes have progressed at an alarming pace, with manufacturers using the latest techniques including computational fluid dynamics and wind tunnel testing to achieve bikes that slice through the air.

So which will be the bikes to look out for? Let's start with Team GB for starters, before moving onto the other contenders for the medals. Lizzie isn't a renowned time trialist - her forte is sprinting. That said, she'll be looking to add to her medal collection and a consistent ride on the 29km course could see her troubling the top step. One to watch, certainly.

And she'll have one of the fastest time trial bikes at her disposal, the Cervélo P5. Well, we're assuming the Canadian company will be providing the newer P5, with its advanced aerodynamics, in preference to the older P4 for Lizzie.

It's a bike that has been completely designed by their own computational fluid dynamics (CFD) program, saving them a stack on wind tunnel bills, and allowing them to test many design changes in a variety of wind conditions relatively easily.

Lizzie will benefit from Magura's RT8 TT hydrualic rim brakes to give smooth and consistent braking, whatever the weather decides to do. Wheels will be decided on the day from Shimano's wide range.

We rode the P5 and you can read out thoughts on it here.

Favouring hilly terrain where her lightness gives her a winning advantage, it's fair to say the mostly flat course around London doesn't suit Emma. She'll be on the same Cervélo P5 as Lizzie, since they both ride for the same team.

Bradley Wiggins – Pinarello Graal. Or something else? After his two stunning time trial victories in the Tour de France, who would bet against Bradley Wiggins reigning supreme in London? The 44km course is similar in length and terrain to the first time trial of the stage race, so should suit him we. He's our tip to win and he's the bookies' favourite to win, too.

Questions remain over his bike however. Will it be the stealthy Pinarello Graal that was so devestating in the Tour de France, or will he ride the same frame, albeit with a change of handlebars, as he rode in the road race? We'll be honest, we don't know – we doubt many people outside of Dave Brailford's small team know – so we'll be watching keenly tomorrow to find out.

If it is the Graal then he'll be confident of having one of the fastest bikes currently available.

Chris Froome - Pinarello Graal. Or something else?

Bradley Wiggins' biggest rival in the Olympic time trial could actually be fellow countyman and team mate at Team Sky, Chris Froome. He was second to Wiggins in both of those Tour de France time trials so the race to the line could be close.

Chris will ride the same bike as his Team Sky leader Wiggins, as he did in the road race, Doubts linger over Fabian's ability to defend his Beijing 2008 gold medal, following a crash in the road race as the breakaway group negotiated Richmond Park.

There's no doubt about what he'll ride though: Trek's Speed Concept. We got a good nose around his bike while it was being worked on for the Grand Départ of the Tour de France in Liège.

Making use of the latest understanding of aerodynamics, Trek have developed what they call the Kammtail Virtual Foil (KVF). The tube profiles are Kamm tail in profile, named after the German aerodynamicist Wunibald Kamm. Trek use this 5:1 airfoil with the tail cut off to keep inside the UCI rules while still getting the aero benefits of the full size airfoil, cunningly tricking the air.

Fabian's bike will be decked out with the latest components from Bontrager including their wheels. Expect a snazzy paint finish.

It's a bike we found exceptionally fast when we tested it recently. 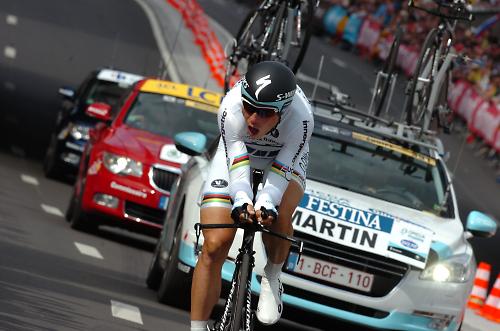 Due to injury, World Champion Tony Martin hasn't recently shown the form that would suggest he'll be in the hunt for gold in the Olympic time trial, but you never know... he could be there or thereabouts. He'll be on Specialized's Shiv equipped with Zipp wheels. We'd imagine that he won't be taking the gamble of using the prototype clincher tyres that punctured during the prologue of the Tour. The Shiv has been around for a few years now and, after early incarnations breached UCI rules leading to a redesign, it has proven to be a seriously fast bike in the right hands. 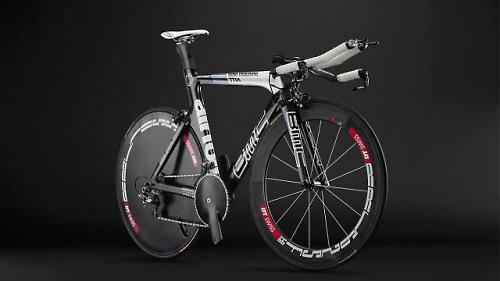 We reckon American Phinney is in with a good chance and the bookies agree. His win in the Giro d'Italia's opening time trial, though much shorter than the Olympic event at just 8.9km, is testament to the young rider's potency in the race against the clock.

Taylor will be riding BMC's slippery Time Machine TM01, a bike first released a couple of years ago. It uses some of the latest design features in its aim to cut clean and fast through the wind, like integrated brakes, a 'hinge' head tube/fork steerer assembly that allows the front to be narrower than a traditional setup, and airfoil shaped tube profiles. One clever design touch is the internal wedge for the seat post to remove the external clamp usually necessary. 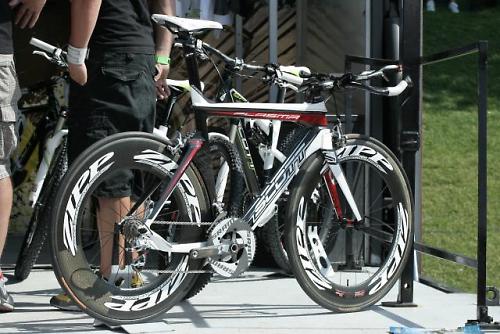 And finally Judith Arndt, the four times German national individual pursuit champion and Olympic silver medallist in the Athens 2004 road race, who is tipped by the bookies to win the women's time trial. Her results in the last couple of years haven't been as stellar as they once were, however.

She'll be riding Scott's Plasma. It's a well-proven bike that has been used by several teams before GreenEdge in 2012. Renowned aerodynamicist Simon Smart was involved with the development of the Plasma, and though it's been around a few years it still looks current. Integration is key with the stem blending smoothly into the front of the frame and top tube, the rear brake hidden away down behind the bottom bracket and large-profiled head tube and seat tubes. And of course, we can't forget the Olympic women's road race gold medal champion, Marianne Vos. She'll be in with a fighting chance of being in contention for a top spot.

The Giant Trinity is another time trial bike that has been around a couple of years. It shocked the world when released, and still remains one of the fastest in the circuit. It uses an external steerer to minimise the frontal area, a dramatically curved seat tube closely following the rear wheel, and a very deep section down tube.

To see other time trial bikes to look out for, take a look at our Tour Tech with bikes from Canyon, Cannondale, Trek and Giant, each of which will be in contention.

We've just been sent this video by the lovely people at http://news.surreycc.gov.uk who were out on the time trial course this morning armed with a video camera. And crikey there looks to be everyone out recceing the course.

Right at the end you can spot Emma Pooley riding with the women's coach Chris Newton.

Those are our predictions of the bikes - and, of course, their riders - to watch out for in the Olympic time trial. Who do you think will take gold?

1
Phil Liggett believes Lance Armstrong would have won the Tour without drugs
2
Near Miss of the Day 549: Cyclist nearly taken out by speeding driver desperate to overtake
3
Cyclist fined after submitting dangerous driving video to police
4
Emergency vehicle causes crash in peloton
5
Cycle campaign group urge people not to cycle over safety fears
6
'Incredibly talented' police officer killed after being hit by motorist while cycling
7
Five cool things coming soon from Merida, Bontrager, 100%, Farr and Hill & Ellis
8
Near Miss of the Day 547: “My fellow riders did not know how I was not hit,” says cyclist as Jeep driver tailgates overtaking motorbikers through pinch point