Next year's new bikes, saddles and clothing from Charge
by David Arthur @davearthur

At the stunning Mercedes-Benz World near Weybridge, Cycling Sports Group put on a show to reveal its 2013 line-up from brands such as Cannondale, GT, Schwinn, Sugoi and Charge Bikes. We'll bring you highlights of each brand individually, and we'll start with Charge.

We were lucky enough to get a sneak look at what Charge Bikes have up their sleeves for the 2013 model year out when we were out in Taipei in March, but this was the first official UK presentation of the new bikes. And they've clearly been busy; there are a couple of new models filling price points, new saddles, clothing and an all-new cyclo-cross frame. 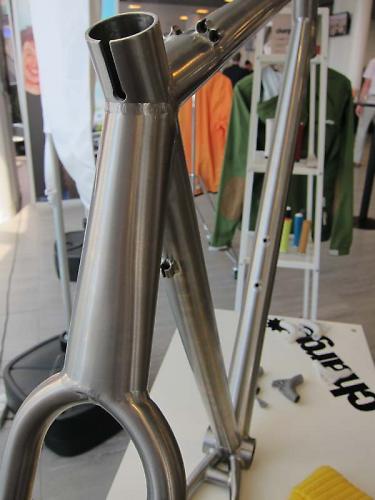 This new titanium cyclo-cross frame really stole the show for us; a real headturner. It's one of only two prototypes in existence at the moment, production bikes will have a tapered head tube rather than the straight diameter one seen in this photo. Details include top tube mounted cables, wishbone rear stays, heavily manipulated tube profiles, and the neatest dropouts we've ever seen. 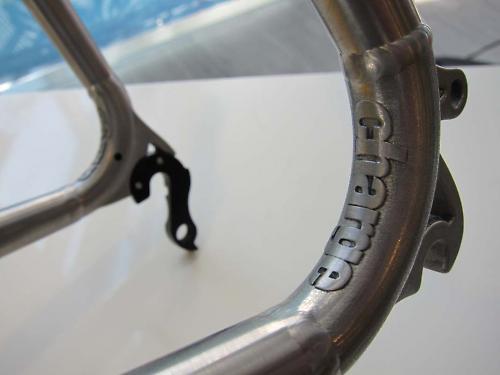 Charge have worked with EADS (European Aeronautic Defence and Space Company), a contractor to the likes of Airbus (they're based on the same site as the commercial aircraft manufacturer). They're working with a properly state-of-the-art manufacturing process, additive layer manufacturing (ALM). It's similar to 3D printing but using lasers to reinforce the structure, which means the finished part is much lighter while retaining the same strength. You start out with a fine layer of titanium powder, on which a precision laser draws an outline, melting the layer. This process is repeated until a 3D object rises magically from the dust. It's not hard to imagine that in 10-20 years a complete bicycle frame and all the components could be manufactured this way. Airbus have been using the process, making an engine cover door hinge on the A380 which is some 65% lighter than the previous cast item. There are limitations at present, and not just the high cost, but also EADS' machine is only large enough to produce an object two foot by two foot. While the process is slow, there's no wastage at all. Unused powder is returned to the hopper it is stored in and can be used next time.

And it's not too much of a leap of the imagination to see it eventually being possible within the realms of affordability. Design it in CAD, analyse with FEA and print with ALM. Job done! EAD have made an entire bike out of nylon though, which shows what is possible (it's a TLA-fest today).

For now, we'll just have to make do with dropouts. It's damn expensive too at the moment so Charge will offer a limited run of 50 frames. Availability isn't expected until next year, which is a shame if you were hoping to get one for the upcoming cyclo-cross season. And the cost? A frame will set you back about £2,000. 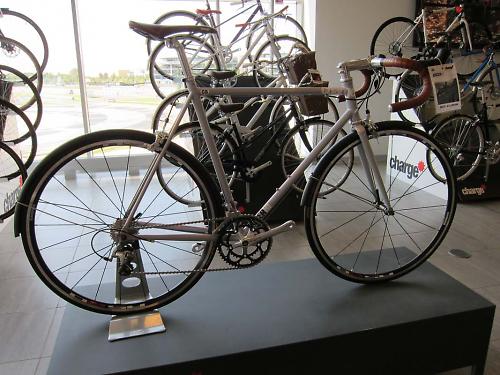 This is the lovely – but not easy to photograph – Juicer Hi. You need to get up close to get a good appreciation of just how lush the pain finish is. It really looks resplendent in the right light. 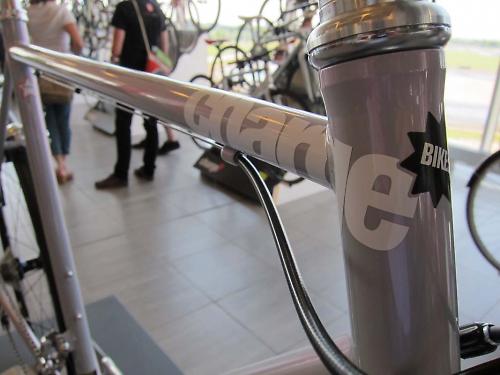 Components on the £1,199.99 bike have been updated, with lighter stems, bars and seat post dropping a little weight. The mudguards fit to the frame with minimal disturbances to the otherwise clean lines of the bike. Could this, the Filter Hi, be the perfect winter bike? Using a similar Tange Prestige double butted chromoly frame as the Juicer but with disc mounts and clearance for fatter 'cross tyres, and mudguards if you want too, it's ticking a lot of boxes. Charge call it 'commuter cross' and we couldn't agree more. And it costs just £999.99 which seems like a great value package to us. 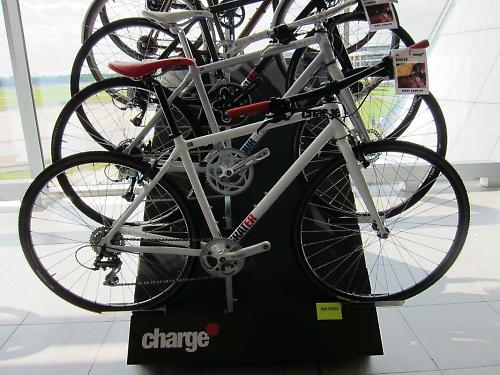 Another new model is the Grater – at this rate they'll be running out of kitchen equipment to name their bikes after (they've not used Milk On The Turn yet - Ed). It's got an aluminium frame with flat bars, a single ring chainset and mini V-brakes, and a price of just £399.99. Looking for a fun town bike? You've just found it. 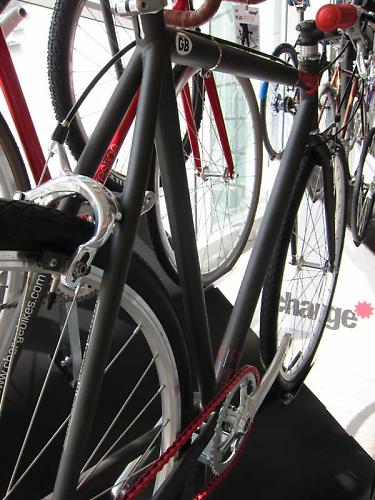 And finally, the new Plug 3. Using Sturmey Archer's 3-speed hub gives the Plug more versatility than the singlespeed/fixed variant if you live somewhere with a few hills and dips. 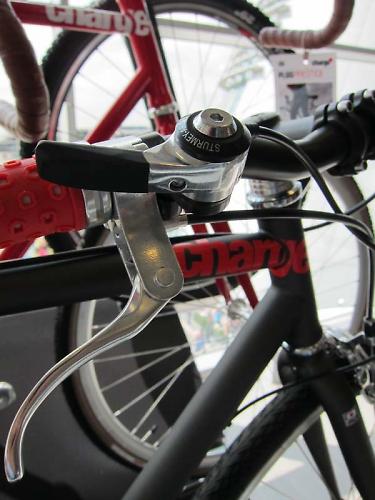 That rear cover is being replaced by a smaller and better looking version for production bikes. It comes in at £499.99. 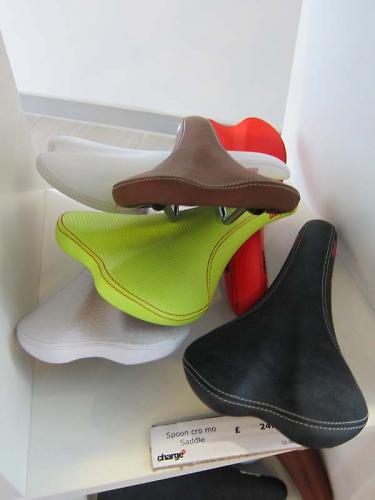 The classic (and much copied) Spoon saddle now comes in a raft of fetching new colours. We're loving the mellow yellow. 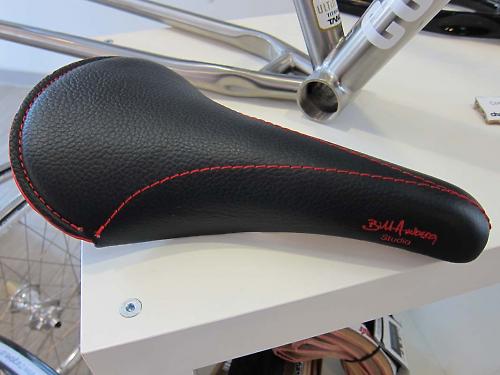 Charge have collaborated with renowned lover of leather Bill Amberg. The leathersmith deconstructed a Pan saddle and reimagined it in beautifully carefully sourced leather, detail stitching and a lovely external rear seam. 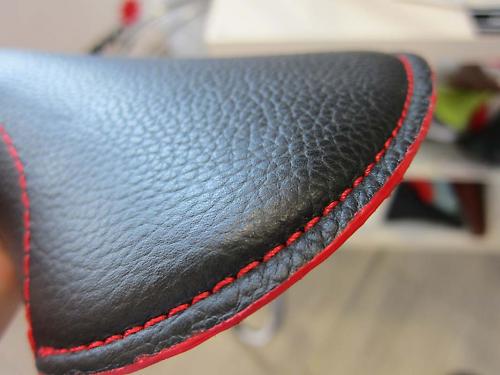 Gives this saddle some serious street cred, and yours for £39.99. 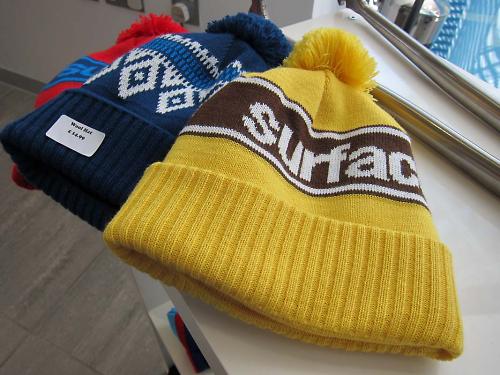 With the approaching winter (what do you mean, 'we're still waiting for our summer'?) Charge's clothing brand Surface has some cool new woolly hats to keep your grey matter warm. Ideal for standing around after a 'cross race waiting for the results to be announced. 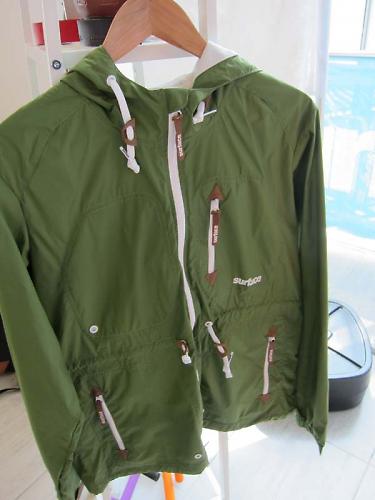 There's lots of new Surface clothing. They'll soon be selling the entire range online through a new website, so if you've ever had trouble finding a bike shop that stocked it, that'll be a problem of the past. We first saw this new Parka jacket at Eurobike last year, and now it's available. Lots of toggles and zips, elbow pads, a waterproof fabric and a hood. 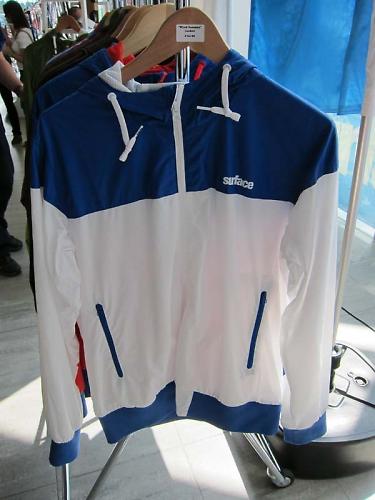 The Wind Cheater. Available in three colours, it uses a lightweight windproof fabric and a mesh lining means you can wear it next to the skin without getting clammy. Ideal over a t-shirt or jersey then. 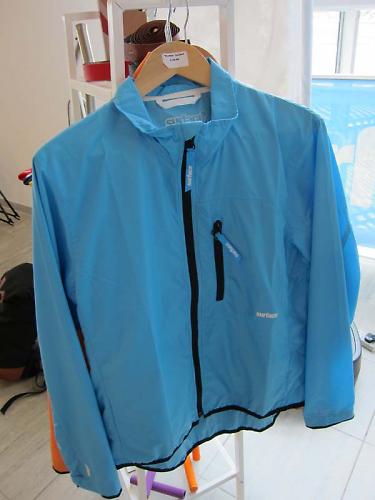 The Pertex jacket, designed to be water resistant. Available in several colours.