New geometries, belt drives and an entry level Fixie in the mix for 2010
by Tony Farrelly

With Eurobike almost upon us the new range announcements are coming thick and fast – and now it's the turn of Fixie Inc, the German purveyors of cycling high fashion with a sense of humour and an eye for detail. For 2010 they've re-worked their range and introduced a new model – the Backspin, and what is effectively a new model – the Peace Maker. That nearly new model first then, last year Fixie wowed Eurobike with their belt-drive, stainless steel concept bike – this year they've introduced a bike sporting the Gates Belt Drive system in to their range - the 2010 Peace Maker. Their production belt-drive bike sports a number of refinements and innovations that weren't present on the original concept bike.

Benefits of the belt are zero maintenance and longer lifespan says, Fixie, they're quiet too… and you won't get any oil on your skinny jeans.

When the time does finally come to get your belt on or off, Fixie have come up with a new JigSaw Coupler system making it easier to get the belt on and off, (their original bike had S&S couplings) subtle looking it is too – see if you can spot it. Fixie wanted a system that allowed the belt to be fitted without the need to bend the chainstay.

We asked Holger Patzelt from Fixie to tell us  how it works (click on the links for a close up of the coupling on an unpainted bike and for another of a dis-assembled example):

"Unlike the great looking S&S coupling devices we used formerly, the JigSaw is pretty simple. It consists of two brazed-in frame attachments and the coupling unit itself. Important for a proper fit, the surfaces have to follow tight tolerances. You can get an idea about the inner shape here and assembled and fitted without paint here. For us it was important that the new unit avoided bending of the stay ends when inserting the belt, yet had the ability to transport any bending and torsional forces which are occuring in this area. We purposely stayed away from the dropout/CS area not to weaken this part in any way. The srews will have a torx head and fine threads to be extra tough."

The other innovation is a new cog profile developed in association with Gates Germany and Nicolai that allows fixed and freewheel cogs to be run with the belt while maintaining an identical belt line for both. In additions says Fixie a new mounting standard means that:

"Fitting a fixed rear cog no longer requires special tools. This increases the user-friendliness dramatically and reduces the risk of incorrect fitting."

Another benefit of the belt according to Fixie is that the increased width required for the belt means that the spacing at the back is 135mm (the same as for most MTBs) rather the the standard 130mm road spacing. This, says Fixie makes for a stronger rear wheel.

The other big change over the previous version of the Peace Maker, and one that runs right through Fixie's 2010 range is that the geometry has been revised to give what Fixie are descibing as "a balanced yet lively ride" we're guessing that this means that angles are being relaxed in to a more road, less track/ first generation urban fixed format.

One thing that doesn't change for 2010 is the Ice White Shut colour scheme complemented by ice blue decaling which is also picked out on the inside of the belt.

No news on price as yet, we'll find out the UK prices at Eurobike, but we do know that it will be slightly more than this year's model. The other big news in the Fixie range is a new entry level machine, the Back Spin Fixie's entry level machine which they promise features all of their usual high standards of finish and attention to detail and their F1 cast dropouts, flip flop hub and upgrade compatible 120mm rear spacing, a retro-style BMX saddle finished things off for under €850. And the name? Holger from Fixie explains: I searched for a word that is related to music and includes something which is spinning back (like backward cycling with a fixed wheel bike). Basically it´s a DJ move used in HipHop to rewind the record fast of about 1-2 rounds, and use the sound as a part of the mix. 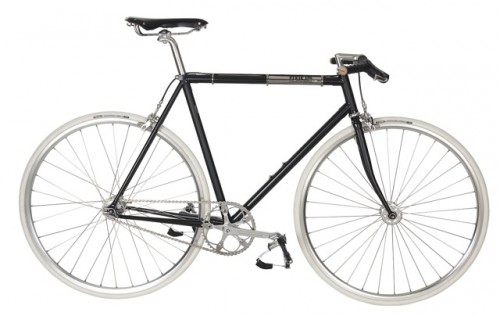 To sharpen up the contrast with the new Peace Maker for 2010 the Black Jack has had a complete makeover of everything from the finishing kit to the geometry. The bike comes with a new mucho comfortable Seagull handlebar and a height adjustable polished quill stem, the SL Stainless steel dropouts have been re-designed, while the colour scheme harks back to the original Black Jack – it's black, with some extra black bits in what Fixie describe as: "A timeless arrangement of gloss and matt black tones combined with mirror polished stainless steel surfaces."

Other pleasing touches are the leather saddle and bar tape, as you'd expect in a retro sylee.

It's not just the finishing kit and finish that have been revamped – the lugged steel frame has been re-worked too with new geometry, those re-designed SL dropouts and 120mm spacing at the back. As with the Peace Maker it's the smaller sizes that have seen the most change with new frame angles in the smaller sizes. Holger felt that the original angles, at around 70°, were pretty low. Top tube lengths move up in 15mm increment over all sizes on the Black Jack, Peace Maker and Pure Blood.

Likewise across the range chainstay lengths have been tweaked to reflect the riide character of the bike – for the Black Jack that means 405mm, the Peace Maker comes in at 400mm and for the Back Spin a shorter 395mm – for more immediate delivery of your pedaling power to the back wheel.

Fork rakes have also been adjusted right across the range to eliminate front wheel flop in the smaller sizes and give more consistent trail figures – again the idea is also to deliver a consistent ride experience for all sizes of a particular bike. And speaking of sizing, Fixie have also made that consistent across their range too, so if you need a Betty Leeds in Large and then decide you want a Peace Maker too – the right size will be a large also.

Aside from the geometry tweaks mentioned above, the big changes for Fixie's cyclo cross bike are to the tubeset with new tube sizes (the seat tube diameter is now 27.2mm) and subtle changes to the tube profiles – Fixie's goal is a more rigid and comfortable ride – the seat tube change is aimed at achieving the latter. The proven modular IDS-dropout system (exchangeable dropouts for singlespeed or derailleur gears) has been revamped with geared versions now featuring Direct Postmount (DiPS), allowing Postmount-disc brake calipers to be fitted without adapters.

The DiscO fork has been correspondingly modified to allow DiPS use. For 2010 the Pure Blood will comes with the new SRAM Force groupset and mainly black finishing kit.

Finally there's also a new XS size being added to the line-up and the decals have been re-designed along the same lines as those on the Chip Race road bike. 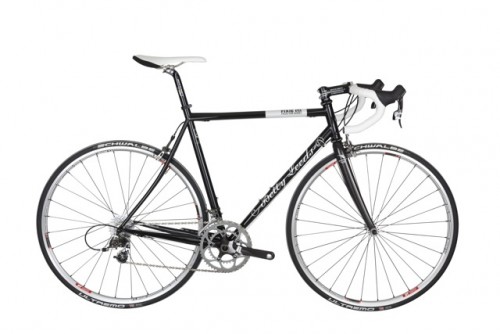 We were big fans of the 09 version of the Betty Leeds when we reviewed it, but that hasn't stopped Fixie trying to make it better. Like the Pure Blood it features a new tubeset which it is claimed will deliver a stiffer and yet more comfortable ride, again the tubeset changes are along the lines of those on the Pure Blood with new tube profiles and a seat tube that will not take a 27.2mm post, unlike the Pure Blood the Betty's dropouts remain unchanged – in this case they are Fixie's CNC machined SLs – as with the Pure Blood though Betty has had her fork re-worked. The finish though remains the same… well it would have been hard to improve. 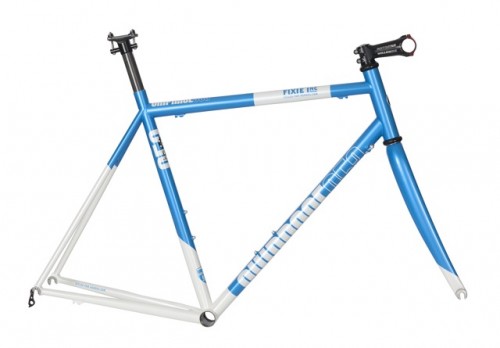 Fixie's Reynolds 953 road bike gets some subtle but siginificant changes for 2010. Together with Reynolds Fixie have developed new, lighter chainstays, there are some revisions to the geometry in line with those across the Fixie range and the frame set will now be available with the option of a custom painted Easton EC 90SL fork.

Not a bike, but obviously something dear to the chaps at Fixie, and it's a nifty idea…

"We share the same big love for bikepolo you do. We believe that everybody enjoys playing for sure."

To help players build a new building a new mallet or replacing a worn mallet head by themselves Fixie have come up with this modular bike polo mallet constructed with standard diameters and head dimensions to make replacement quick and simple. So get 'em while they're hot or this will be another one of those games we Brits invent only to have the Germans comes along and beat us at it.