...and produce special Marco Simoncelli commemorative bike plus one for Fernando Alonso too
by David Arthur @davearthur

Colnago surprised everyone at the at the EICMA, the international motorcycle exhibition currently taking place in Milan, with this splendid Mapei C59.

Why Mapei? During the 1990s Colnago supplied bikes for the iconic Mapei team - one of their greatest ever - with their colourful cubed jerseys. Colnago enjoyed much success during this partnership, which ended in 2002. There was Franco Ballerini’s victory in the 1996 edition of Paris-Roubaix, aboard a C40. Then in 1996, in the same race, Belgian Johan Museeuw headed a clean sweep of the podium . Many of the top racers of the past couple of decades pulled on a Mapei jersey at some point, like Cadel Evans, Jan Ullrich and Mario Copillini.

Don't rush out in the hope of buying one though, it's strictly a one-off and has been produced for the boss of Mapei, Mr Giorgio Squinzi.

Have a watch of this video to see that 1996 victory. It's something special.

Colnago exhibited another very special bike at the show. It’s been donated to the Marco Simoncelli foundation, set up in the name of the young Italian Moto GP racer who tragically died following an accident in the Malaysian Grand Prix  in 2011. It's going to be auctioned off to their charity and bids are apparently starting at €20,000. 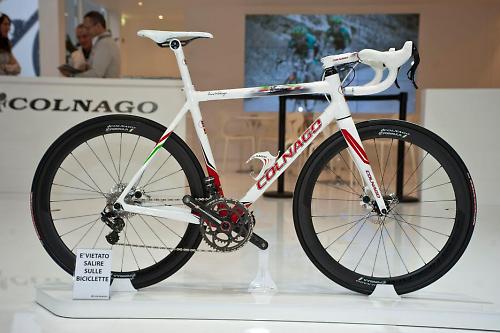 They’ve painted a C59 Disc to commemorate Simoncelli with a graphic of the Moto GP racer in elegant full flight across the top tube. The typeface has changed from the standard issue and owes more to the bolder fonts often used in motorsport. The young racer's number, 58 is printed on the seat tube.

You can find out more about Marco and the work the foundation is doing here. Finally, continuing the motorsport theme and the company’s long association with Ferrari, there's this one of a kind Colnago K Zero Ferrari for F1 driver Fernando Alonso. 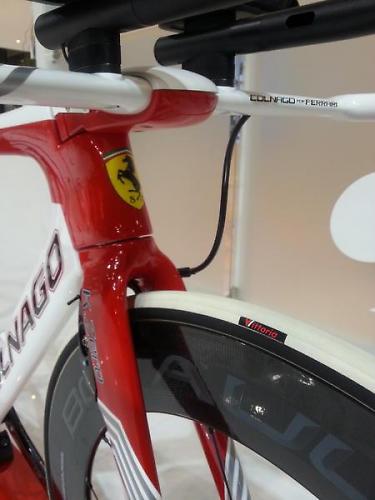